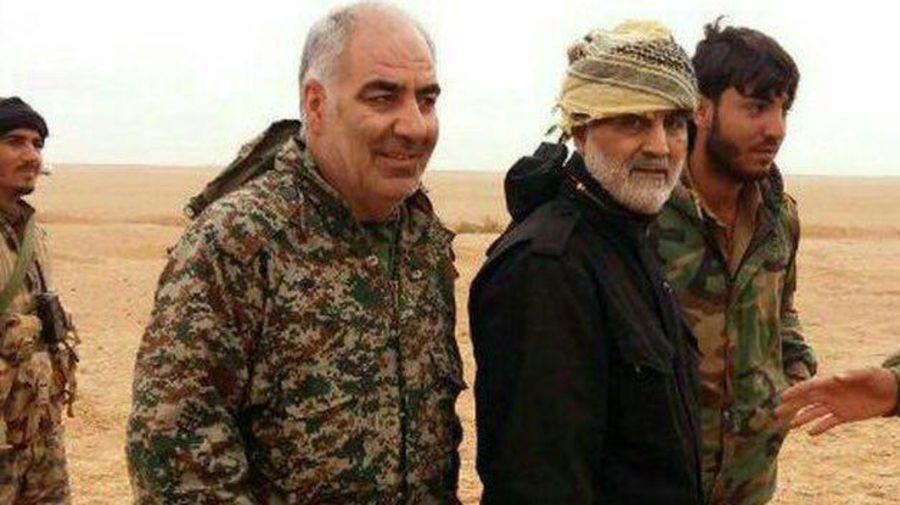 Iranian Rev Guards Gen. Soleimani set up a forward war-room in Syria after Assad’s army and Hizballah failed to recover strategic Abu Kamal from ISIS.
The Revolutionary Guards Al Qods chief Gen Qassem Soleimani, supreme commander of Iranian warfronts in Syria and Iraq, was seen on Sunday morning, Nov. 19, at the scene of the Abu Kamal battle, the key southeastern town near the border with Iraq (in Deir ez-Zour province), after Syrian and Hizballah forces had failed to recapture the town from an Islamic State counteroffensive. DEBKAfile’s military sources, reporting this, disclose that Soleimani’s deputy Khairallah Samadi was killed in battle. Samadi had fought alongside Soleimani as his closest military adviser for 37 years ever since the Iran-Iraq war. He was killed by an ISIS mortar shell.

Our sources learn that the Iranian general dispensed with the Syrian army and Lebanese Shiite Hizballah services for the recovery of the key town of Abu Kamal and brought in instead four battalions of the Iraqi Shiite militia, Harakat Hezbollah al-Nujaba (Movement of the Part of God’s Nobles). This militia, a fighting arm of the Revolutionary Guards, had been supporting the Assad regime from 2013 when, earlier this year, Soleimani transferred it to the Yemeni warfront as back-up for the Houthi rebels.
To bring them back into Syria through Iraq, Soleimani had Iran’s engineering crops round up floating bridges to carry the militiamen from east to west across the one-and-a half kilometers’ wide Euphrates River. His relentless campaign to recover Abu Kamal was supported massively by six Tu-22M3 long-range bombers which on Nov. 16 flew in from their Russian bases through Iran and Iraq to bomb ISIS targets. They destroyed military personnel, hardware and weapons.

The recovery of Abu Kamal cleared a path for Iranian forces to come in from Iraq and head straight for Palmyra and Damascus. However, the sight of Iranian military forces moving into Syria so close to its border set teeth on edge in Amman. Jordanian leaders view the presence of Iranian forces in Abu Kamal as a direct threat on their northern border and complained to Washington. However, according to our sources, all Jordanian attempts to bring this peril to the attention of the Trump administration failed to draw a response. And in Israel too, no government or military quarter showed any interest in the arrival of Iran’s Revolutionary Guards at Abu Kamal.