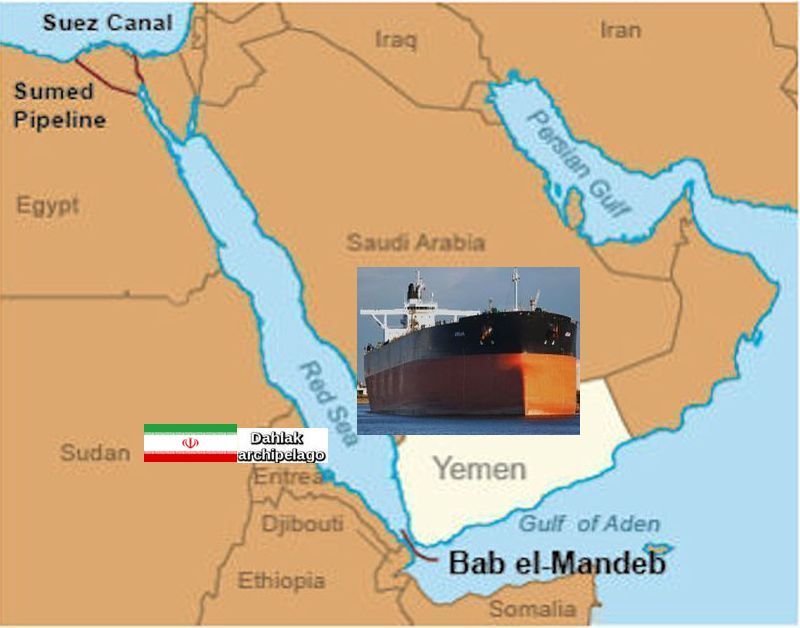 The attack on two Saudi supertankers on the Red Sea on Wednesday, July 25, was orchestrated by the Iranian Saviz, a weapons-carrying spy ship, DEBKAfile’s intelligence sources report.
Disguised as an Iranian-flagged cargo vessel, the 16,660-ton ship carries containers aboard and below decks filled with advanced surveillance gear for tracking commercial and military shipping on the Red Sea. Western and Middle East naval sources have for some weeks been watching the Saviz in a holding pattern between its home base on the Eritrean Dahlak archipelago and the Bab al-Mandeb Straits of the Red Sea.

Before the first Saudi supertanker Arsan was attacked, Saudi and United Arab Emirates intelligence intercepted signals from the Saviz informing Houthi coastal bases of the Arsen’s projected route opposite Yemen’s Red Sea coast with a timeline for when the tanker would come within range of the Yemeni rebels’ shore-based missiles. Our military sources estimate that the Houthis used Iranian C-801 or C-802 shore-to-ship missiles against both the Saudi super tankers they attacked. Only one achieved a direct hit to the Arsen’s stern almost certainly near the water line, but its warhead only partially detonated, causing a 2-3m hole in the hull. Had it penetrated any deeper and reached the 2 million barrels of oil in ship’s hold, one of the worst environmental disasters ever would have ensued. Several other Houthi missiles exploded in the water.

The day after the attacks, Iran’s Quds force chief Qassem Soleimani gloated: “The Red Sea is not secure with the presence of American troops in the area,”

Although the damage to the Arsen was indeed minimal as the Saudis claimed, they decided not to take any chances and immediately announced the suspension of oil shipping through the Red Sea and Bab al-Mandeb until conditions were secure. Oil prices shot up by one percent on the world markets. An estimated 4.8 million barrels of oil are shipped daily through the Straits of Bab al Mandeb, which is only 20km wide. Any move to block this Red Sea strait would virtually halt oil shipments from the Gulf through Egypt’s Suez Canal to the Mediterranean that are destined for Europe and the Far East.
Since October 2016, there have been eight Iranian-instigated attacks on US, Saudi and UAE warships and tankers sailing through the Red Sea. They were conducted by Houthis, who were trained in weapons and assault tactics by Iranian Revolutionary Guards and Hizballah instructors. They taught the Yemeni insurgents how to use anti-ship missiles, fast explosive boats, speedboats equipped with RPG launchers, drones and sea mines. The Houthi missile strike on a pair of Saudi tankers differed from the preceding attacks in that for the first time, Iranians were directly involved.
The US only reacted once before to this aggression: A Houthi missile base on the Red Sea shore was smashed on the orders of President Barack Obama after striking the USS Mason warship on Oct. 9, 2016.

On Friday, July 27, sources in Washington reported that the Trump administration was weighing possible military action, including expanded intervention in the Yemen war, to keep the Red Sea oil shipping route open against Iranian threats to the waterway. Administration officials denied these reports saying that any military action would be taken by US regional allies such as Saudi Arabia, and not American troops. The Iranian naval spy ship Saviz has therefore got away with threatening a key international oil route, while Tehran has proved willing to perpetrate an unimaginable environmental calamity.