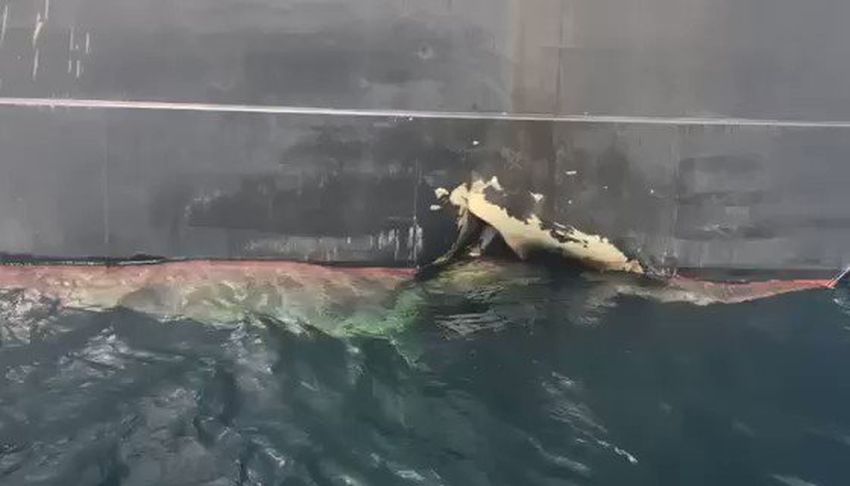 A special unit of the Iranian Revolutionary Guards marine force carried out the sabotage attack Sunday on 4 Saudi oil tankers outside Fujairah port, DEBKAfile’s exclusive sources reveal. Iran chose this venue in the Gulf of Oman waters of the United Arab Emirates for its first proactive strike against US sanctions, because it is way off the beaten track of Gulf oil export routes. There were two other reasons:

(a) To show the US and Gulf oil nations that Tehran doesn’t need to block the Strait of Hormuz in order to disrupt the Gulf’s oil exports to international markets.

(b) The UAE has built the new Habshan-Fujairah oil pipeline there for the purpose of circumventing the Strait of Hormuz. By striking Fujairah, the Iranians demonstrated that alternative shipping routes are just as vulnerable to Iranian attack as the Gulf of Hormuz.

The above picture shows a direct hit to the Norwegian-flagged Andre Victoria oil tanker which was almost scuttled.

Our sources note that although war tensions between US and Iran were mounting sharply, Western intelligence and the Gulf emirates were caught off-guard by the location of the Iranian attack and its precise targeting. It is now estimated that Tehran carefully calibrated the blasts to cause damage while falling short of sinking the vessels or inflicting casualties.

The coming issued of DEBKA Weekly (for subscribers) out on Friday, May 17 calls on its expert military and intelligence experts for a closer, more detailed look at the Iranian operation, how it was accomplished and how it hoodwinked Western and Gulf intelligence watchers. To subscribe to DEBKA Weekly, click here.