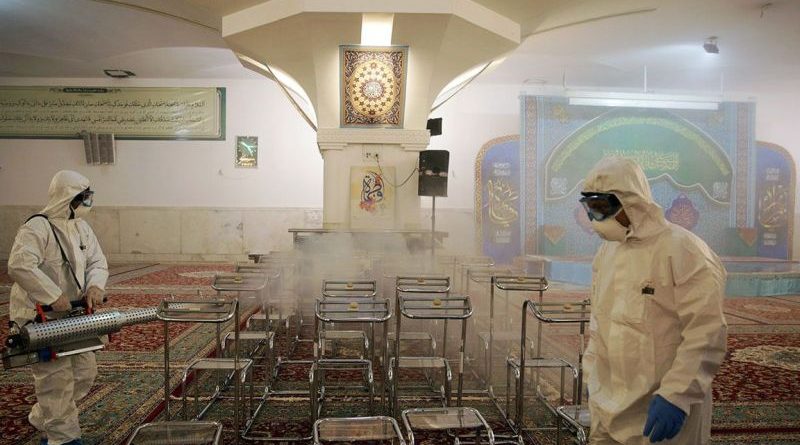 US Secretary of State Mike Pompeo once dubbed the pandemic the “Wuhan Coronavirus” after its original epicenter. Now that China has seen a day without a single death, a more fitting tag might be the “Shiite Crescent Coronavirus.” On Wednesday, March 18, Tehran reported the disease had slain a total of 1,135, with deaths occurring at the rate of 147 a day, and altogether 17,361 confirmed cases.

These figures are widely disputed within Iran, including by hospitals and doctors, and by the World Health Organization and other authorities. The Islamic regime is accused by experts of covering up a death toll of at least 12,000.

Researchers at the respected Sharif University of Technology in Tehran have created a computer simulator to assess the further spread of covid-19 in varying scenarios. Even in the best case of effective government quarantines in all high-risk areas, strict public observance of quarantine rules and guaranteed sufficient medical supplies, the epidemic would peak in Iran in about a week, they say, and claim a death toll exceeding 12,000.

However, since none of those pre-conditions prevail, a worse catastrophe lies ahead. The government proves unable to impose quarantine, people flout the rules of isolation, medical supplies are in short supply thanks to US sanctions and chronic government mismanagement borders on gross negligence.

Given these circumstances, the university researchers fear that the peak of the endemic will hit Iran in late May and claim as many as 3.5 million lives.

With a doomsday forecast hanging over the 80 million dwellers of the Islamic Republic of Iran, its supreme leader Ayatollah Ali Khamenei is nowhere to be seen or heard. His state of health or even whereabouts are unknown. According to DEBKA Weekly’s Iranian sources, the ayatollah, whose health is fragile in normal times, has shut himself away in total seclusion after members of his inner circle succumbed to the virus. Since Khamenei is unapproachable, no one can tell who is running the campaign against the spread of covid-19 – if anyone.

This situation is fertile ground for rumors in the afflicted towns of the country that the campaign has fallen prey to infighting within the Islamic regime. President Hassan Rouhani and his government, the Revolutionary Guards commanders and the heads of the national army are said to be locked in a fierce power struggle. Other rumors suggest that Khamenei has himself been infected.

Four weeks into the outbreak, more than 30 million inhabitants of the areas stretching from the clerical center of Qom to the Caspian Sea in the north find themselves unattended and exposed to infection, with no one in authority to turn to – neither the Revolutionary Guards, the army or the government headed by President Rouhani. Satellites have meanwhile picked up images of people digging dozens of pits to bury victims.

On Wednesday, at a cabinet meeting in Tehran, Rouhani tried to defend his slack response in closing the Shiite Muslim shrines in Qom, the first epicenter of the outbreak – and Mashhad. Both are pilgrimage sites and fertile fields for spreading the disease far and wide across the Shiite world, inside and outside Iran.

Rouhani explained that it was hard to shut down the mosques and holy sites against the insistence of senior clerics that they stay open, and the crowds forcing their way in. “But we did it,” he said. ‘It was our religious duty.” He also denied any government cover-up about the scale of the outbreak.

However, the cover-up is far more extensive than the true severity of the domestic plague. The regime’s failure to stem the rapidly advancing pandemic, while adhering to the strictest tenets of the Shiite revolution, has forced Rouhani – apparently on orders from the secluded supreme leader – to issue repressive orders to Tehran’s satellites. Syrian President Bashar Assad, Lebanese Hizballah chief Hassan Nasrallah and the Palestinian Islamic Jihad of the Gaza Strip were instructed to pretend that their dominions and populations have remained untouched by the covid-19 pandemic.

Therefore, up until the present, Syrian officials are reporting zero coronavirus infections after “103 tests came up negative.” At the same time, echoes of the virus’ presence keep on breaking through. On March 14, the Syrian cabinet was forced to announce the closure of schools, universities, mosques and public offices. Cultural and public events were cancelled. And media linked to the Shiite militias operating in Syria reported the closure of the holy shrines of Sayeda Zeinab and Sayeda Ruqaya in Damascus – all without revealing the cause of these steps.

In Lebanon, the strongman Hizballah leader Hassan Nasrallahtook a leaf out of his boss Ayatollah Khamenei’s book and dropped out of sight.