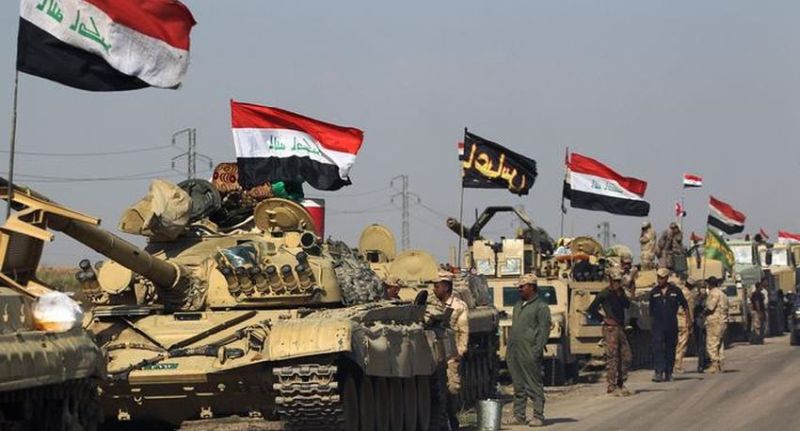 Murmured plots to force Iraqi Kurdistan’s President Masoud Barzani to step down were swirling through Irbil Thursday, Oct. 26, after his capitulation to the Iraqi army and Shiite militias, which seized the Kirkuk oil center on Oct. 16, under the direct command of Iran’s Gen. Qassem Soleimani.

The wheel of violence continues to turn in Iraq, powered by the same Iraqi-Iranian military lineup.

Broad swathes of land continued to be seized from the KRG (Kurdish Republic), even after Irbil’s offer Wednesday to freeze the results of its independence referendum and open dialogue between Irbil and Baghdad based on Iraq’s constitution. The KRG also called for an immediate ceasefire and halt to all military operations in the region, hoping to ward off full-scale war between his Peshmerga and the Iraqi armies plus the same pro-Iranian Shiite militias.

The answer from Baghdad was a threat by Prime Minister Haydar al Abadi, to send in the Iraqi army and Shiite militias to seize the airfields of Irbil and Suleimaniyeh, as well as the KRG’s external border crossings with Syria, Iran, Iraq and Turkey.

The pro-Iranian Shiite militia was meanwhile still on the rampage through Kurdish towns, a week after capturing Kirkuk On Wednesday, the Kurds accused the Iranian-backed Shia Hashd al-Shaabi militia of burning and pillaging Tuz Khumatu and forcing a mass Kurdish exodus. They noted bitterly, that after fighting to evict the Islamic State from Iraq, they were being driven into a new wave of violence. The pro-Iranian militias were moving in on the ISIS strongholds liberated by the Kurds as well as Kurdish towns,

Tehran could boast that its intervention, orchestrated by Iranian Revolutionary Guards Al Qods leader, Gen. Soleimani, was responsible for Kurdistan’s downfall and carrying off a pro-Shiite victory in Iraq.

Kurdistan’s semiautonomous standing is consequently at risk and its economic props and lands have been swept away, together with the prestige of its Peshmerga army. Furthermore, US and Russian political, military and strategic footholds in the Kurdish territory and Iraq at large were thoroughly undermined.

The US envoy Brett McGurk, who witnessed the unfolding calamity from Baghdad and Irbil, failed to gain traction for his efforts to salvage a modicum of US influence from the crisis. His hands were tied, not least because the US-backed Peshmerga had not been supplied with the American munitions, heavy armored cars and artillery as well as ground-to-air weaponry, for putting up a serious fight against its assailants – not to mention their betrayal by infighting.

Even Vladimir Putin’s senior Middle East strategist, Deputy Foreign Minister Mikhail Bogdanov, though powered by its oil giant Rosneft’s investment in the KRG, was told to wash his hands of the Iraqi Kurds for now, quit Iraq and switch his efforts to the Syrian Kurds (See a separate article.)

Both the US and Russia left the Iraqi field open for Iran to walk in.

If there had been any hope that ousting ISIS would lay the ground for Iraq to restore some sort of sectarian equilibrium, it was quickly dashed. The Iraqi army and Iran’s Shiite surrogates are still on the march.

They are engaged in a fresh military campaign, launched by Al-Abadi Thursday, Oct. 26 to subdue the Sunni Arab tribes of the western province of Anbar and the Euphrates Valley.

This campaign is a formidable gamble.

On the one hand, those tribes may fold like the Kurds. But, on the other hand, they may take up arms to prevent the Shiite militias from overrunning their historic lands, and may even be goaded into resistance by the impact of the Kurdish downfall.

The instability set up by the shifting sectarian balance in Iraq may well draw in foreign elements: Saudi Arabia, for instance, traditionally stands behind the Arab tribes of Anbar: or the ISIS may gather strength to help the Sunni tribes fight off Shiite dominance.

Is Tehran really going for a major Sunni-Shiite conflagration in Iraq? If so, a far larger investment of military resources and troops will be called for than Iran needed to sustain its intervention in Syria.

Last Minute: US envoy Brett McGurk Thursday stepped in for an effort to assert an American role in the escalating Iraqi conflict, and possibly save KRG President Masoud Barzani. He put forward a proposal for the Iraqi army’s planned military takeover of the KRG’s airfields and its external border crossings, be achieved with Irbil’s consent, instead of by force. The US envoy is still waiting for answers.