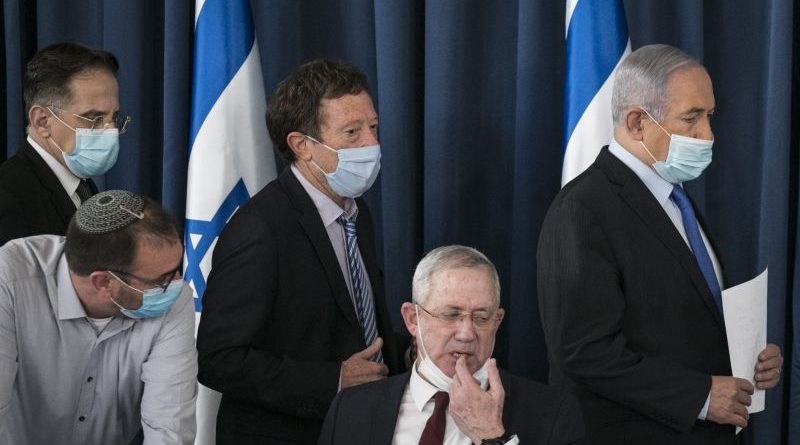 It will happen in November unless Israel’s two equally stubborn co-prime ministers give way on their budget dispute before Aug. 25. Alternate prime minister, defense minister Benny Gantz, is holding PM Binyamin Netanyahu to his coalition accord commitment to pass a two-year budget this year. Netanyahu insists on a one-year budget for 2021 although only three months remain of this year, Both leaders and their followings have dug in their heels and are fighting hard for their seemingly irreconcilable positions. If neither gives quarter, Israel will face its fourth superfluous election in less than two years and most likely wind up with the same dead end of no single party able to form a viable government. How masked voters, thousands of whom are in coronavirus quarantine, can cast their votes is a side issue for the two protagonists who are locked in heated debate.

Two pieces of good news were meanwhile released by the coronavirus cabinet on Thursday in the hope of relieving the popular gloom. From August 16, Israelis will be allowed to travel to “green” countries and won’t be obliged to go into 14 days of quarantine on their return home. The “green” countries have yet to agree to receive them in bilateral accords for allowing their nationals to visit Israel despite its high level of infection. Millions of Israelis who habitually travel the world have been chafing hard at the covid-19 restrictions.
Another ray of hope came from the news from the Biological Institute at Ness Ziona that its coronavirus vaccine had advanced to the third stage of clinical testing on humans. Defense Minister Gantz was informed that those trials will begin in mid-October and could be ready for mass-production in the first half of 2021.

However, the latest polls released on Friday, Aug. 7, showed the mounting popular disaffection with the government’s performance taking its toll on the two ruling parties, Netanyahu’s Likud and Gantz’s Kahol Lavan, while benefiting the opposition.
Likud, which two months ago rode high with 41 seats (out of 120) over Netanyahu’s success in beating down the first coronavirus assault, has progressively dropped to 32 should an election be held today. The figures were driven down by soaring virus infection, economic downturns and social protest. Likud’s coalition partner Kahol Lavan plummeted to 11 seats.

The placards hoisted by the social protesters call on the government to step down for the sin of being “out of touch” with the country’s most urgent needs. The prime minister has not always managed to deliver on his promises of generous benefits and compensation for those who lost jobs and hard-hit small business owners.

In the opposition camp, the Kahol Lavan segment led by Yair Lapid and Moshe Ya’alon, which broke away from Benny Gatz when he joined the government, would come in second with 18 seats. Naphtali Bennett’s right-wing Yamina, which also opted to stay out of the coalition government, profited and can count on 12 seats – going up. Netanyahu’s religious partners, Shas can expect a solid 10 seats and United Torah Judaism – 8. Their leaders, Aryeh Deri, Moshe Gafni and Yakov Litzman, are imploring Netanyahu and Gantz to accept a sensible compromise on their budget dispute, since an election with the country in its present parlous medical and economic state would be “madness.”

Evaluated by the new poll in terms of blocs, Netanyahu’s rightists might conceivably achieve a wafer-thin majority of 61 or 62, provided Yamina came aboard, while Gantz’s centrists could tally 60 if the Arab Joint List were to be co-opted to government for the first time.

The incumbent government would fall after a mere four months in office if it failed to table a state budget in the Knesset by Aug. 25. The Knesset would automatically dissolve itself and a national vote would take place in November 2020.
So what are the options? The highly vocal blame game between the two ruling parties has projected various scenarios, some highly speculative. Netanyahu is accused by Kahol Lavan and opposition leader Yair Lapid of hatching the budget crisis so as to take over government as caretaker prime minister and bar the way for his partner Gantz to assume office as prime minister in November 2021 in keeping with their coalition accord.

Kahol Lavan maintains that a budget covering three months makes no sense, while Likud argues that coronavirus will still be around in 2021 accompanied by unpredictable financial challenges. Another argument put forward by Netanyahu is that a biennial budget would necessitate cutbacks in spending, whereas putting the various economic sectors back on their feet without delay calls for massive outlays of cash at this moment.

The feverish rhetoric heard on all sides this week is widely interpreted as the opening chords of an election campaign. The speculation rife about their various maneuvers includes the charge that Gantz must stick to his guns over the budget to prove he has the backbone to lead. Another conjecture is that Netanyahu is planning to form a new party in view of the criticism he faces in parts of his own Likud. Two weeks ago, he tried and failed to fire MK Yifat Shasha-Biton, the Likud chair of the Knesset coronavirus committee, for leading a revolt against government restrictions on gyms and pools. Other Likud members lined up behind her and questioned the judgment of their party whip Micky Zohar, a loyal Netanyahu ally.

Israeli politics are notorious cliffhangers with hopeless crises often resolved at the last possible moment after fraying national nerves to the limit. The next two weeks are therefore critical if an election that no one wants is to be averted. The new coronavirus director Prof. Ronni Gamzu’s success in bringing down the rising infection rate in that period may possibly help set the scene for an accommodation.