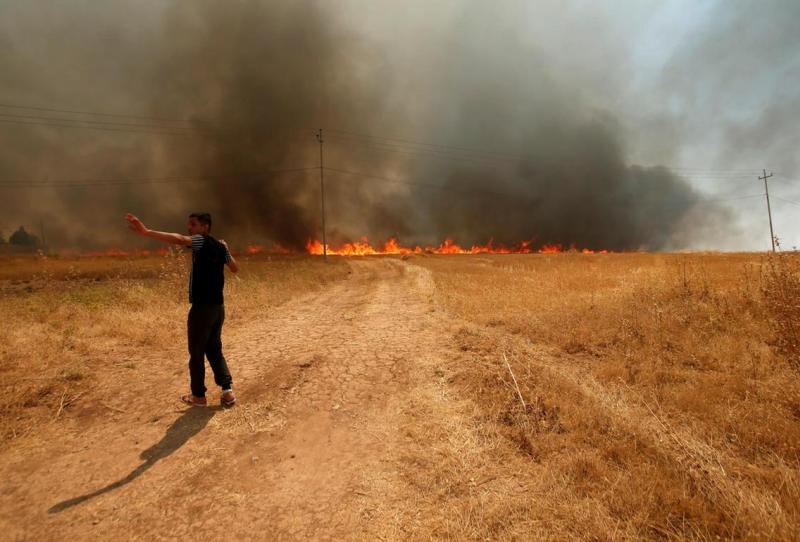 For its latest campaign of destruction, the Islamic State (ISIS) has taken a leaf from the Palestinian Hamas’ book of terror-by-arson used against southern Israel’s farmlands. The wheat fields of Syria and Iraq were just ready for harvesting this month, when huge fires set by Islamist terrorists burned the crops to cinders. More than 85 percent of the crops were totally destroyed, forcing Syria and Iraq, once the venue of ISIS strongholds, to turn to foreign grain suppliers to keep their people and armed forces in flour and bread.

This week, ISIS used its Telegraph channels to claim responsibility for laying waste to the basic food of millions by acts of appalling vandalism unheard of even in the endlessly outrageous Middle East. The figures are hard to take in: Iraq reports 263 manmade fires consumed 1,400 sq.km of ripe wheat and other farm products in the first half of June. Some belonged to Iraqi Kurdish farmers in the Kirkuk and Irbil regions and provided Iraq with its main source of wheat and flour. Those crops were reduced to black, smoking embers. Conflagrations were also ignited in eastern Iraq, mainly in Diyala province. Some Kurdish villagers accused Shiite paramilitaries of starting the fires, possibly in collusion with ISIS, to push them out of disputed lands, where the PMU militias along with the Iraqi Federal Police and Army are responsible for security

Gen. Kadhim Salman, Director General of Iraq’s Civil Defense Department, reported on Sunday, June 16, that Iraqi farmers had planted 13 million dunams of wheat following the exceptionally rainy winter season which came after years of drought. According to Salman, the extent of the arson attacks has been “blown out of proportion.” Some of the deliberately set fires arose from land disputes, he said. “Here I refer to Kirkuk,” and possibly Salah-e-din and Diyala too.

In Syria, 10 firefighters, first responders and local volunteers were killed in frantic efforts to save the burning crops and many more suffered severe burns, according to the Kurdish Red Crescent. The high flames engulfed wheat fields across Syria’s northeast, the country’s breadbasket. The authorities in Damascus and the Kurdish capital of Qamishli established that the fires were started when the Syrian government and Kurds were competing for the purchase of this year’s bountiful wheat harvest.

Kurdish officials tried appealing to the US-led coalition forces controlling this, fertile and oil-rich region for help in extinguishing the fires blackening their cereal crops. However, US forces posted there have neither the manpower nor firefighting equipment for dealing with the monumental blazes ignited by ISIS in both countries.

Dealing with fires on this scale is hopeless without a fleet of dozens of firefighting planes taking off as needed from small, widely scattered runways. That option is a non-starter for a country in which at least seven air forces operate in conditions of war. Wheat since ancient times has symbolized the cycle of life and charity in the region’s dominant faiths. Such virtues are wholly alien to the Islamist sowers of death and destruction.