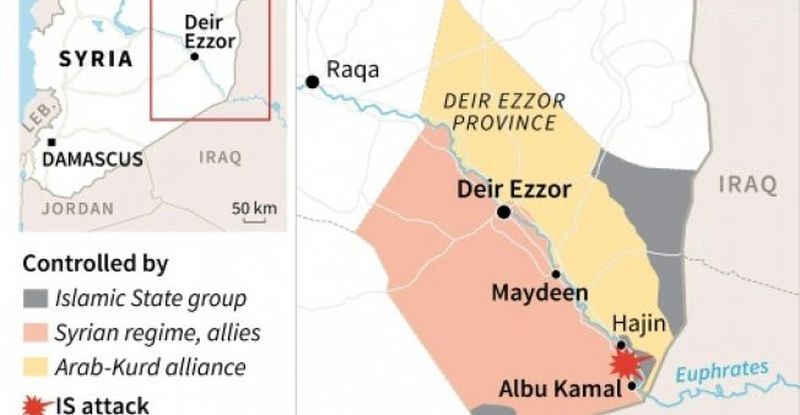 How has the badly beaten Islamic State been able to muster several thousand fighters and arm them with the weapons and logistics for a comeback of terror? Since mid-September, the Islamist terrorists have, almost unnoticed by world media, seized large tracts of land and villages in eastern Syria from the US-backed Syrian Democratic Forces (SDF) and the Kurdish YPG militia. They are waging their renewed war from Hajin, a small Syrian town located east of the River Euphrates near the Syrian-Iraqi border.

A video just released by ISIS shows fighters with MRAP (US-made mine-resistant ambush-protected) vehicles roaming in the Syrian Desert region, with photos of half a dozen trucks and a dozen motorbikes, as well as the armored vehicles typical of their attacks in Syria and Iraq, which were often packed with explosives for their suicide atrocities. Many of those vehicles of death were destroyed when the terrorists were driven out of their Mosul and Raqqa bastions, but a few clearly survived and were back in use.

How this severely defeated terrorist organization managed to spring back into action is one mystery. Another concerns the ineffectiveness of the US forces which were posted in this region to support their SDF and YPG allies in driving ISIS out of its new haven.

The small eastern Syrian town of Hajin, belonging to the Abu Kamal district on the River Euphrates south of Deir ez-Zour, was well chosen by ISIS for its strategic value. It lies within close striking distance of al-Abbas to the west, Ramadi to the south and Gharanji to the north.

In Baghdad, Damascus and Kurdish Qamishli, ISIS conquest four years ago of one-third of Iraq and Syria and 15 million inhabitants, against zero resistance, still evoke shudders. Now, after losing 88pc of the land they conquered, the Islamists are incredibly back on the warpath. Faced with this recurring nightmare, the Iraqi government not only rushed three armored brigades to the Syrian border but forwarded an urgent plea to Tehran for permission to deploy the pro-Iranian Iraqi Popular Mobilization Forces (PMF) militia’s 20,000 men on the Iraqi-Syrian border to fight off any ISIS crossing. This militia is commanded by Al-Qods chief Gen. Qassem Soleimani.

DEBKA Weekly’s military sources report that Baghdad’s plea landed in Tehran in the first week of November, together with America’s reinstated sanctions. It countermanded one of President Donald Trump’s principal goals in imposing those penalties, which is to force Iran to pull its military forces back from Syria and other Middle East flashpoints.

it also exposed the debacle of US-led “Operation Roundup” launched in September to eradicate the ISIS presence on the eastern bank of the Euphrates and evict the terrorists from Hajin. Instead, the Islamists mounted a ferocious counter-attack, in which they killed more than 800 fighters, including more than 300 SDF troops. Their momentum carried them forward to strike the Syrian government forces deployed in the Al Shafah area south of Hajin and inflict heavy casualties.

The US air force tried mounting air strikes on Hajin, with little impact. Thousands of Islamists survived after sheltering in a network of tunnels which they built against detection from the air, while at the same time perpetrating suicide attacks on the SDF and allied forces.

The US command as well as Iran, Iraq and Syria are up against a major problem. Turning the tables against ISIS in eastern Syria is tall order enough, but DEBKA Weekly’s counter-terrorism sources have learned that ISIS “caliph” Abu Bakr al-Baghdadi has launched his next offensive to unleash guerilla fighters in the Syrian and Iraqi areas ISIS once occupied. Secret ISIS cells were left behind, some of them aided by local opposition elements.

Guerrilla war opens a new chapter in ISIS warfare against Syria and Iraq. It is a a far cry from the end of the the bitter counter-terror campaign in Syria, hailed by Presidents Vladimir Putin and Donald Trump.

Abu Bakr’s plans have begun taking their toll in Iraq. In October, 222 incidents were reported, equivalent to 7.1 per day. This surge is the sequel to the rush of terror bedeviling Iraq for some months. Since May, 283 deaths and 257 injured were reported in terrorist incidents.