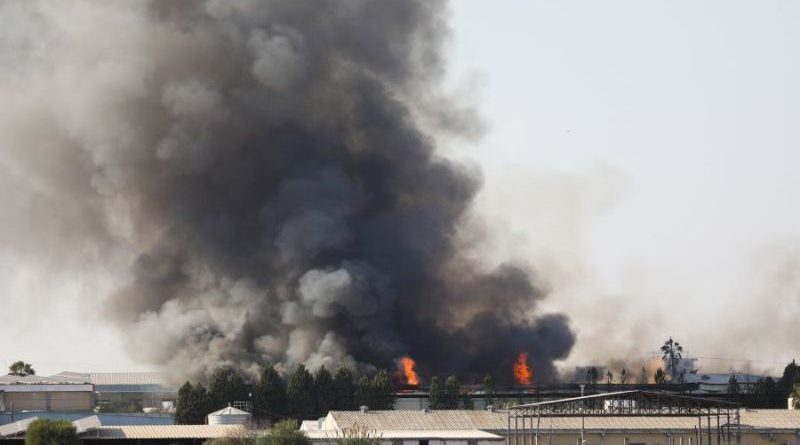 It took minutes, not hours, for the Gaza ceasefire set for 5.30 a.m. on Thursday, Nov. 14, to be blown away by Islamic Jihad rocket fire. The truce brokers, UN Middle East peace envoy Nickolay Mladenov and Egypt, were forced to watch Jihad rockets flying towards southern Israel, after the IDF paused its operations in Gaza and Israel’s Home Command optimistically ordered schools to reopen in the South after a 48-hour battering by 430 Jihad rockets. Even if the well-meaning brokers manage to piece together the scrappy truce, it is foredoomed to fall apart on Friday – if not earlier.

Another poke in the eye was delivered to the truce brokers when Islamic Jihad leader Zeyad al-Nakhala announced from Beirut on Thursday that since “Hamas had abandoned the demonstrators for dollar payoffs via Israel,” his group was taking over the role of protector for the violent Palestinian Gaza-Israel border clashes with Israel forces staged by Hamas every Friday for the past eighteen months,

Nakhalka earlier dictated terms for a ceasefire, stating that if Israel did not meet them, the Islamic Jihad could keep up its attacks indefinitely.

This small Palestinian terrorist group, therefore, refuses to back down from the key role assigned by Tehran, which is keep the Gaza Strip alive, as one of Iran’s three active military fronts against Israel, alongside Syria and Lebanon.

As the opening shot of its plan to neutralize the Gaza front, Israel on Tuesday, Nov. 12 targeted two Jihad leaders for simultaneous assassinations – one in Gaza City and the other in Damascus. Israel aircraft fired three missiles into the bedroom of the home in Gaza City of Baha Abu Al-Atta, commander of Jihad-Gaza’s northern brigade; another Israeli air strike injured Akram al-Ajouri at his home in the high-end Maza district of Damascus. Al Ajouri was Al-Atta’s liaison officer with the Iranian Revolutionary Guards Al Qods chief Gen. Qassem Soleimani.

Their deaths were to have disabled Jihad’s leverage as a force in Gaza Strip affairs. Iran was to be left with two fronts hanging over Israel’s norther borders from Syria and Lebanon. It turns out that Al Atta and Al Ajouri were small cogs in a minor Iranian proxy and can be soon replaced.

Last year, Israel. with US help, sought to downgrade Hizballah, Iran’s Lebanese proxy, as a commanding power in Beirut by disabling a defunct tunnel network the group had run under the border into Israel. That stratagem fell flat. Hizballah’s Hassan Nasrallah continued to stand tall in the Lebanese ruling hierarchy. It was only this month that Hizballah was challenged for the first time on its own turf by mass popular protest seeking to bring down the entire corrupt power structure in Beirut.

With Hizballah faltering, Israel’s strategists seized the chance to go for its Palestinian ally in the Gaza Strip. The moment to strike was doubly opportune with Iran in hot water in a second major sphere of influence, Iraq, where the Shiite masses are calling for Tehran to be thrown out of Baghdad. (See separate article in this issue.)

The thinking in Jerusalem was that Iran had its hands too full holding onto its ebbing influence in Lebanon and Iraq to spare much attention for bolstering its Palestinian minion in Gaza.

It was doubly important to disable Jihad because this Iranian pawn was getting in the way of a joint plan fostered by the US, Egypt and Israel to tame the turbulent Palestinian Hamas group ruling the Gaza Strip by its transformation from a paramilitary terrorist organization with an army of 25,000 fighters, into a political, civil party fit to run for election in the Palestinian-ruled territories.

This plan has been steadily ripening for two years. It is being fertilized by the fabulous sums of petrodollars Qatar is investing in the Gaza Strip in instalments of $20m to $25m per month, plus funding for a new electricity grid and payouts to poor families. Jihad however accused Hamas of abdicating from the path of national “resistance” and kept up a campaign of sabotage.

The best thing to come out of the Gaza escalation this week was Hamas’ steadfastness in standing aside from Jihad’s rocket offensive against Israel. For the first time in its 52 years of active terrorist activity against Israel, Hamas is sitting on the fence while Israel hammers a fellow Palestinian group.

But how long can Hamas stand up to the constant goads and provocations? The US-Egyptian-Israeli plans for Hamas’ future may stand or fall by its continuing non-intervention.

Iran’s Al Qods chief Gen. Qassem Soleimani is another anxious watcher, because his plans are just as much at stake. His overriding interest is to draw Hamas out of its neutrality and into action on the side of Jihad.

DEBKA Weekly’s military and intelligence sources learned that his instructions to the Jihad commanders in Gaza were to keep their rocket fire drawn out rather than intense and short. By launching “just” 450 rockets against Israel in two days, almost entirely by short-range weapons, they complied with their boss’s injunction and served two objectives:

1. The kept a reserve supply of long-range rockets in case of an escalation in Israel’s counterattacks. 2. The steady, drawn-out tempo of rocket aggression was intended to drag Israel into a war of attrition. As Israel intensified its reprisals, Hamas would be forced to abandon its non-alignment and jump in, thus ditching the US, Egyptian, Israeli plans for drawing the organization away from its past terrorist agenda.