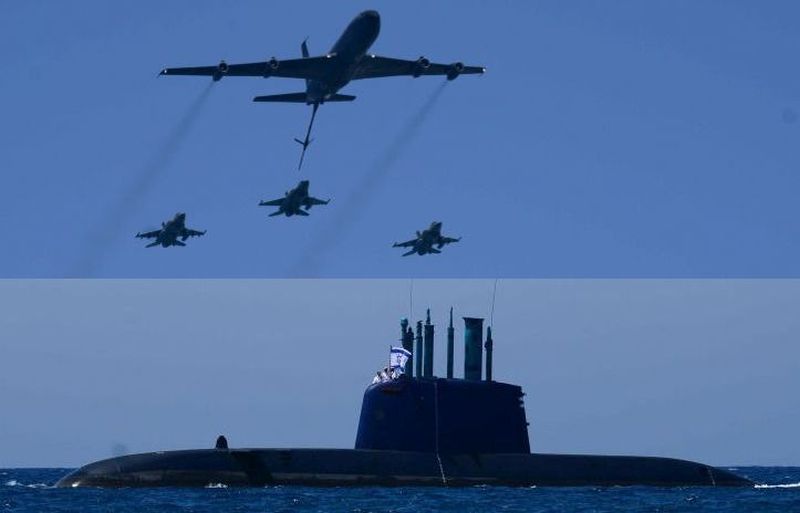 The Israeli missile strike at the Syrian T-4 air base near Homs on Monday, April 9 – which killed Iran’s Revolutionary Guards Aerospace Col. Mehdi Dehghan Yazdeli and seven of his officers – was no lucky strike. The missiles were guided by precise intelligence from two Israeli F-15 jets in Lebanese airspace to Iran’s drone headquarters. Israel is beating the war drums as never before in response to Iran’s threat of retribution. Their beat is almost more thunderous than the repercussions from the US-led missile strike, which occurred six days later.

On April, Thomas Friedman writing in the New York Times, cited an “Israeli source” who told him that the attack on T-4 “was the first time we attacked live Iranian targets – both facilities and people.” The “source” missed out on notable precedents.

On Jan. 18, 2015, the Israeli air force struck a group of Iranian and Hizballah officers secretly inspecting Hizballah’s deployment of Fatah-110 rockets near Quneitra, opposite Israel’s Golan border. Two Iranian generals were killed – Mohammad Ali Allah Dadi and Abu Ali al-Tabtabani, who was in charge of Hizballah’s external intelligence and military (i.e. terrorist) operations, along with 6 Hizballah officers, including commander of the Shiite militia’s operations in Syria and Iraq, Mohammed Issa, and its Golan commander, Jihad Mughniyeh. A year later, on July 16, 2016, Israeli Golan positions aimed two Nimrod missiles at Iranian Gen. Mohammad-Reza Naghdi who was on another secret visit to Quneitra with a party of Iranian and Hizballah officers, to inspect IDF border defenses. The general escaped unhurt, but a number of Iranian officers was killed or injured. These incidents attested to Israel’s high intelligence capabilities for tracking the movements of Iranian commanders in Syria, after proving its mettle in other arenas – witness the attacks on five senior Iranian nuclear scientists in the heart of Tehran between 2010 and 2012. Four were killed and one was badly injured. From mid-2016, Israel abstained from targeting Iranian commanders in Syria, contradicting its leaders’ constant vows to never permit Iran to establish a military presence in that country. Their constraint stemmed from a military and intelligence strategy that hinged on five current conditions:

So long as Jerusalem sensed favorable vibes from Washington and Moscow, Israel saw no need to rock the boat with proactive intervention in Syria. However, the new year brought a radical turnabout in those conditions in both capitals, DEBKA Weekly’s military and intelligence sources note. From January, President Putin was seen investing substantially in strengthening Russian-Iranian political and military relations – and not just in Syria, but on a wider Middle East front. Putin is now immersed in his next goal, bringing together the Shiite and Sunni camps hostile to Israel under one roof, a strong Russian-Iranian-Turkish bloc under his patronage. This necessitated his cultivating ties with Turkish President Tayyip Erdogan.

The Russian president preserved the outer shell of his military understandings with Israel. However, local Russian commanders were soon chipping away at the freedom of action the Israeli Air Force had hitherto enjoyed. This downturn hit bottom on Feb. 10, when a Revolutionary Guards drone operating out of the T-4 air base shared with Russian air units penetrated Israeli air space. It was shot down by an Israeli Apache which had been tracking it. Israeli intelligence revealed this week that the Iranian UAV was carrying explosives for a cross-border attack on an IDF installation. Had this mission succeeded, it would have become the first ever direct Iranian Revolutionary Guards attack on Israeli soil. Israel was additionally motivated for a more proactive stance in Syria by President Donald Trump proclaiming his intention to pull all US troops out of Syria “as soon as possible and leave it to others.” For Israel, this portends a dangerous void on the Syrian-Iraqi frontier where Iranian forces are lurking, ready to move in and set up Tehran’s long-coveted direct land bridge to the Mediterranean through Iraq and Syria.

Israel reacted to the two powers’ U-turns by putting Its excellent intelligence assets to work in support of its strategic goals. Therefore, receipt of data fixing the time and makeup of an Iranian Revolutionary Guards commanders conference at theT-4 drone base, prompted a decision at the prime minister’s office in Jerusalem and the IDF high command in Tel Aviv to strike while the iron was hot – especially when that conference was thought dedicated to plotting another UAV incursion of Israel.

It also presented an opportunity for Israel to fire the first shot ahead of the US strike against Syrian chemical targets, in the belief that Trump intended to widen it out into a broad offensive against Iranian targets (as reported in the last DEBKA Weekly 796). Had Israel’s strategists known that the president would limit the April 14 operation to three Syrian chemical sites, they might have handled the April 9 operation differently. As a result, Israel itself fired the starter gun for the prospective military showdown with Iran.