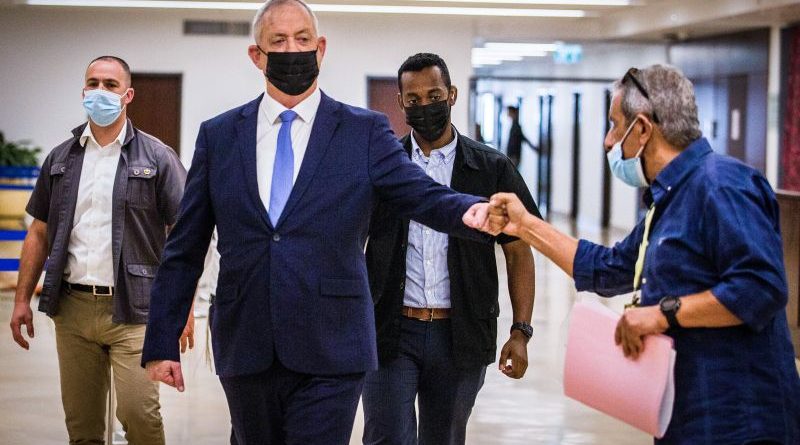 The bill’s preliminary reading was passed by 61 to 54 MKs Wednesday, Dec. 2, in an opposition move to dissolve the Knesset and bring about a new election. The Ra’am party broke ranks with the United Arab List and abstained from the vote after talks with PM Binyamin Netanyahu. The bill faces a committee debate and three readings before being passed into law preparatory to a new election taking place three months later, which would be the the fourth in less than two years.

Alternate PM Benny Gantz voted with the opposition seven months after joining forces with PM Binyamin Netanyahu in a unity government for battling the coronavirus pandemic. Before the vote, Gantz said that the rift could still be healed if the prime minister presented the 2021 budget forthwith. He also floated the idea of an alternative government without resorting to an election.

The government coalition’s survival depended from its birth on two incompatible politicians: PM Binyamin Netanyahu and Alternate PM defense minister Benny Gant. In seven months, their Likud and Kahol Lavan parties never managed to overcome their dissonance and consummate a working partnership for beating the covid pandemic and its collateral economic damage.

This week, the virus again started lurching out of control. Tuesday, Dec. 1, saw 1,227 new cases, the highest since mid-October. A massive five-day shopping binge in 15 reopened malls was a glaring testament to the ministers’ latest bungled decision and the inevitability of a third lockdown.

PM Netanyahu’s deadline for tabling the 2021 state budget is Dec. 23, or else the government falls. The alternate prime minister Gantz had to decide whether his segment of Kahol Lavan awarded his erstwhile co-leader Yair Lapid a majority for the motion to dissolve the Knesset on Wednesday.

Two factions allied with Gantz holding ministerial posts, Labor and Derekh Eretz, jumped the gun by declaring their support for the opposition motion, echoing the argument that the absence of a budget and chaotic mismanagement has paralyzed governance. Defense minister Gantz accused Netanyahu of putting his personal legal troubles ahead of the country’s needs.

The Kahol Lavan leader had to struggle with a personal dilemma. Was giving up his alliance with the detested Likud rival, in response to pressure from his followers and the taunts of Lapid, worth the candle, when it would kill his only chance of gaining the premiership in eleven months’ time? It is then that his rotation deal with the Likud leader is due to come into effect. His advisers warned him that Netanyahu had no intention anyway of making good on that commitment. So why hang on to an increasingly unpopular relationship?

On the other hand, Lapid made it clear on Wednesday that if Gantz returned to the Kahol Lavan fold for an election, he would no longer be the group’s accepted leader.
The prime minister has said little about his intentions, beside commenting brusquely that elections would be bad for the country. The pundits say that he has systematically delayed tabling the state budget for the years 2020 and 2021 as a lever to hold over the heads of an unruly coalition partner. The budget issue gives him the option of determining if and when an election would benefit Likud – for example, when the first coronavirus vaccines come on tap next year. Dissolution over the budget issue, would, moreover, leave him at the head of a caretaker government until an election.

Aside from the covid vaccines, Netanyahu appears to be counting on his extraordinary feats of regional peacemaking and other signal accomplishments to see him through the woods. However, the unending pandemic is eroding popular readiness to put up with irksome restrictions, financial troubles and emotional depression, as the ministers he leads seesaw helplessly on the brink of another lockdown. Furthermore, his opponents’ personal antipathy to him and his family overrules rational politics. It is reflected in vacant senior positions which the two parties can’t agree to fill.

The religious parties are solidly behind Netanyahu. Right-wing Yamina, estranged from Likud, is soaring in the polls and its leader Naphtali Bennett is toying with challenging Netanyahu for the premiership. The United Arab Front is divided; Mansour Abbas, leader of the Ra’am party has been engaged in talks with the prime minister.

This preliminary vote is just the first step on the road to an election. The legislative process through committee and three full readings may yet be interrupted. Gantz has left the door wide open for horse-trading to save the day and stave off an election