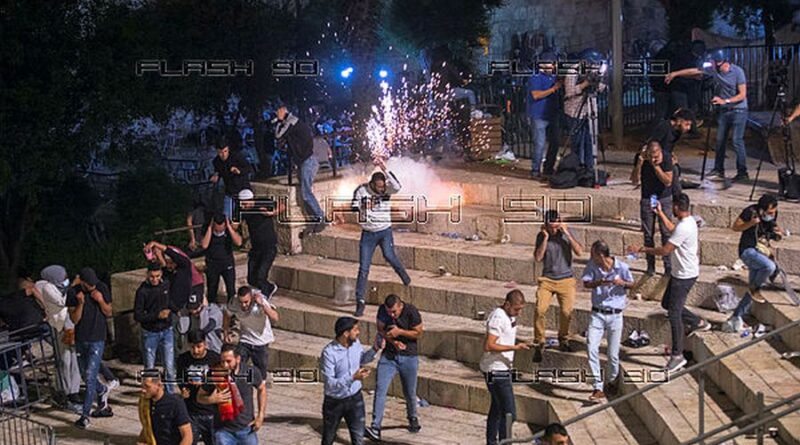 Israel’s beefed-up security forces managed to contain another outbreak of Ramadan violence in Jerusalem and Temple Mt, on the night of Saturday, May 8, that was to have signaled an all-out Palestinian confrontation against Israel. Palestinian Authority leader Mahmoud Abbas (Abu Mazen) in Ramallah and Hamas military chief Muhammed Deif in Gaza – each for his own reasons – tried to inflame the Muslim masses on the Night of Al Qadr to go forward towards a major offensive against Israel. But, unlike on Friday night, the tens of thousands of worshippers at Al Aqsa Mosque left more or less quietly.

The next challenge facing Israel’s security forces is Jerusalem Day on Monday, May 10, when exuberant youngsters waving Israeli flags dance through the Old City streets to the Western Wall.

Abu Mazen is intent on stirring up the rage of the masses to cover up his crumbling control of the Ramallah government and show he’s still the boss after canceling a rare Palestinian democratic election to avert a certain Hamas victory against his Fatah movement. Deif seized the chance to flex Hamas’ muscle against Israel and win points against its rivals in Ramallah.

Police commander, superintendent Yaakov Shabtai, on whose shoulders reposed the tasks of holding the Jerusalem unrest in check, acted tardily at first to reduce the surge of Muslim faithful to Temple Mt. But, by Saturday evening, thousands of officers were in place to block the highways to Jerusalem. Backed up by Border Guard units, they held back the thousands streaming to Temple Mt from Israeli Arab locations. Another 5,000 officers were deployed at the shrine ready to contain repeat attacks. By Sunday morning, the Al Aqsa worshippers had dispersed after a couple of minor clashes on Temple Mt, at the Old City gates and in other parts of Jerusalem.

It is hard to say who should be credited for this anticlimax: the failing powers of Abu Mazen and Deif, or the efficacy of Israel’s security forces who finally recovered after being seriously rocked off balance by the unrest in the capital.

Refusing to be deterred by these stormy events, IDF Chief of Staff Lt. Gen. Aviv Kohavi, determined that Israel’s biggest ever military war game should begin on schedule on Sunday, regardless of any disorders in Jerusalem. This exercise is designed to test the IDF’s ability to handle war offensives around its borders simultaneously with Palestinian outbreaks inside the country. The armed forces will be practicing scenarios postulating simultaneous Iranian and Hizballah aggression from the north, Palestinian violence in the country’s heartland including Judea and Samara and Hamas/Islamic Jihad attacks from the Gaza Strip in the south.

Had Kochavi been put off by the riots in Jerusalem, the Palestinians would have been able to claim a major achievement and the IDF deemed not up to contending with potential aggression on multiple fronts. Postponing the war game was therefore not an option – especially now that two fronts, the West Bank and Gaza Strip, were on fire for escalation, and two others presumed to be lying in wait to see how Israel handles itself.

The question now, therefore, is will Abu Mazen, Muhammed Deit, Hizballah’s Hassan Nasrallah and Iran’s supreme leader Ayatollah Ali Khamenei seize the moment for launching the third Palestinian “intifada” (national uprising) against Israel. The second uprising a decade ago claimed thousands of civilian lives before it was put down. At present, Israel appears to be between governments, with relatively untried politicians poised to take over from long-serving Binyamin Netanyahu who is still at the helm as caretaker prime minister.