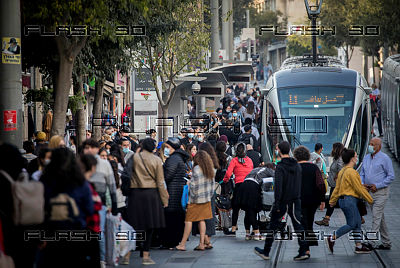 Health Ministry experts insist that so long as new infections don’t drop below 500 and are less than 1pc positive, no more restrictions should be eased next Sunday as planned. Otherwise, they say, a third lockdown was unavoidable. This contention is strongly contested by most members of the coronavirus cabinet, which is due to convene on Thursday, Nov. 12. They are demanding that the planned reopening of shopping malls, markets and some high school grades go forward on Sunday when the third stage of the exit process is planned to kick off.

The Health Ministry is opting for Tuesday for a better chance to evaluate the updated infection figures from the second exit stage opening on Sunday of high street shops, which were crowded with shoppers, and the 1-2 school grades.

On Thursday, the ministry reported 655 new coronavirus cases confirmed the day before out of the 49,498 tests conducted which registered a 1.6% positivity rate. Of the 544 people in hospital, 305 people were in serious condition with 131 on ventilators.

One proposal, which too is hotly disputed by the ministers is to go ahead with the relaxations, while imposing a night curfew. A senior health official, Dr. Sharon Alkalay-Price noted in an interview that the curfew was effective and ineffective in others. For it to work, especially in keeping people from crowding in bars and nightspots, it would have to be imposed as early as 6 pm and weekends. Whether the weddings being staged nightly, mainly in the ultra-religious Jewish and Arab communities, would be stopped, or simply rescheduled for daytime was, she said, anyone’s guess. In any case, the police would be required to act far more strictly against offenders than they did at present.
This complaint touched on signs of popular mistrust of the government’s selective handling of such offenders, which leads to some defiance of the rules. Most recently, a high court justice was found holding a family wedding in a hotel with hundreds of guests. He later claimed lamely that he was not aware of the rule restricting indoor celebrations to 10 indoors and 20 in the open air. Anti-government demonstrations are another hot issue among the ministers.

Prime Minister Binyamin Netanyahu is maneuvering among the conflicting views within his cabinet and the health ministry’s warning of a third lockdown. He is said to be working on a comprise formula, such as the partial reopening of big stores and malls and the restoration of studies in some classes, along with an abbreviated, selective night curfew. The number of “red” regions under lockdown may be increased from four to 20. And the police would be ordered to strictly enforce the rules including enlarged fines.

The alternative to a compromise solution would be to put the entire third exit stage on n hold indefinitely, which Netanyahu has ruled out as no making sense.

The education authorities and most experts urge the full reopening of all school systems, as in most of Europe, in view of the extreme damage caused an entire generation of children deprived of a regular educational framework. The Finance Minister Yisrael Katz cites galloping unemployment and thousands of bankrupt businesses.

While the Pfizer breakthrough to a 90pc effective vaccine was greeted with optimism –  and Netanyahu was on the phone to its director to put Israel high on the firm’s list of clients – HHealth Minister Yuli Edelstein cautioned that a significant quantity of vaccines could not reach Israel next year.” His officials have been in negotiation for months with the most promising vaccine research bodies in the world to push Israel to the top of their queues for early supplies.