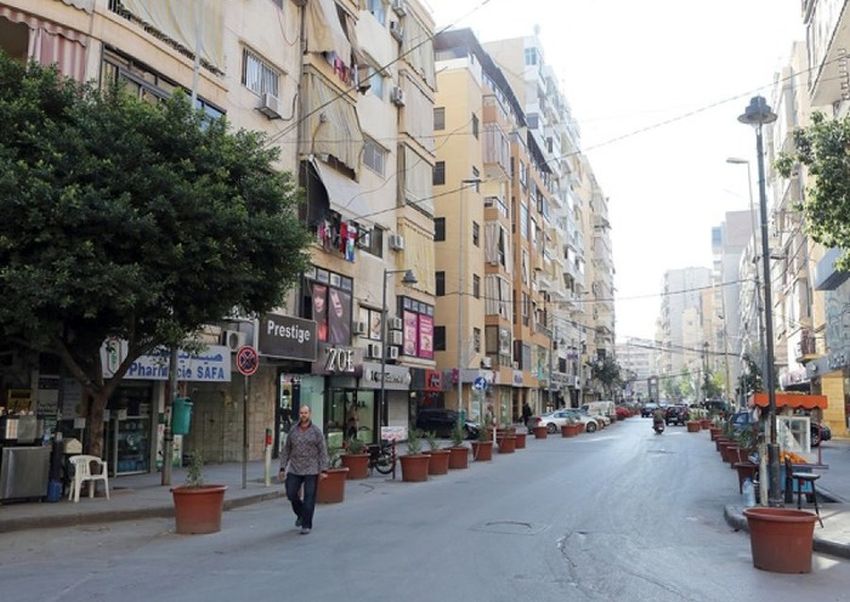 In its exclusive account of the Aug. 25 drone crash in Beirut, DEBKAfile can reveal its real objective: the targeted assassination of a Hizballah’s senior operational liaison officer with Al Qods chief Qassem Soleimani, Iran’s supreme Mid East commander. That operation matched in significance the Israeli aerial operation outside Damascus which preempted an imminent Iranian drone attack.

It is no wonder that Hizballah chief Hassan Nasrallah looked pale and shocked when he threatened to punish Israel in a speech on Sunday afternoon.
The drone attack, according to DEBKAfile’s military and intelligence sources, was the first targeted assassination Israel has ever conducted by air over a main street in Beirut. Soleimani later called it “insane.” The first of the two drones was unarmed on a reconnaissance mission to track the movements of the targeted high-profile Hizballah officer on Mouawad Street in the south Beirut Shiite district of Dahya.

Posh shops which attract tourists line one side of this street. On the other, are located top secret lodgings used by Middle East terrorist bigwigs associated with Iran when they spend time in the Lebanese capital – Yemeni Houthi rebel chiefs and heads of the Palestinian Hamas and Islamic Jihad, to name a few. The occupants of these carefully hidden residences tend to stay out of sight, among them the targeted Hizballah officer.
The first drone was sent Saturday night to pinpoint his whereabouts.

Liquidating this important link in the chain between Iran and its senior proxy in his hidden lair was planned to drive home to Soleimani and Nasrallah that Israel was on to this key figure and knew where to find him. The first drone therefore flew dangerously low over Mouawad Street and was therefore easy prey for a young local boy to throw a big rock and bring it crashing down, a feat of which he boasted later. The IDF thereupon lofted a second drone over the street. This was packed with explosives. Its target was not the Hizballah media center as generally reported, but a car outside the building next door. No sooner had the Hizballah officer targeted for assassination stepped into that car when it was hit by the armed drone that was programmed to home in on him.

If Israel maintains the momentum of the last 48 hours, the operation on Mouawad Street, no less than the air strike on a villa housing Iranian drones south of Damascus, may turn out to be the opening shot of a new war offensive against Iran and its proxies before their plans of aggression get going in earnest.

On Sunday, the IDF continued to push forward.

The powerful pro-Iranian Iraqi Hashd al-Shaabi militia, or Popular Mobilization Forces (PMU), blamed Israel for the deadly drone attack that day on two trucks driving past the Iraqi border town of Al Qaim on their way to the Syrian border. At least 10 militiamen were killed, including a senior officer, in what the PMU called a “blatant attack with air cover over the area from American planes, in addition to a large balloon to monitor the area near the site of the incident.”

DEBKAfile reports that the target was the PMU’s 45th Battalion which is responsible for carting Iranian arms from Iraq to Syria and on to Hizballah in Lebanon.

Early Monday, Lebanese media reported that the Israel Air Force attacked Popular Front for the Liberation of Palestine (PFLP) targets in the Bekaa region near the Syrian border. This attack came after three Palestinian rockets were fired from Gaza at Sderot and other nearby communities. Two were intercepted by Iron Dome and the third exploded harmlessly on a road. However, flying shrapnel showered down on the 4,000 people attending a festival in Sderot. At least 16 people were injured in the panic.

More up-to-the-minute details from behind the scenes of the escalating confrontation involving Israel, Iran and Hizballah will be laid out in the coming issue of DEBKA Weekly (for subscribers) out next Friday, Aug. 30. For your subscription to this premium publication, click here.