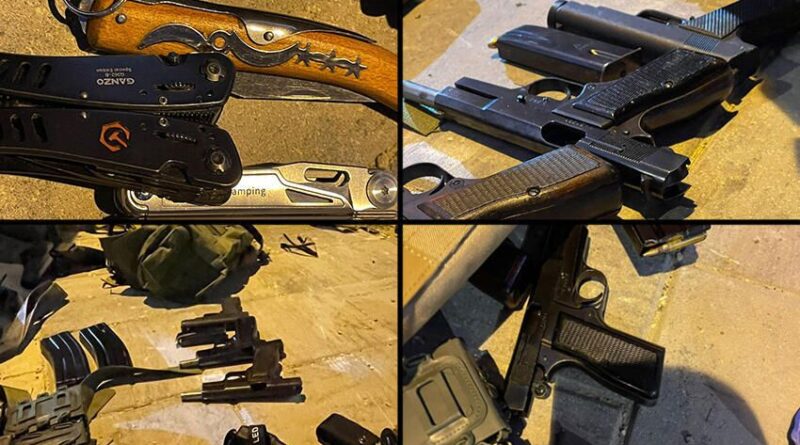 Two Border Police officers, a woman and a man – Shirel Abukarat, from Netanya, and Yezen Falah from the Druze Galilee village of Kisra Sumei – both aged 19 – were shot dead in downtown Hadera Sunday night, March 27. Police officers dining at a nearby restaurant killed the two gunmen on the spot. Islamic State claimed responsibility for the attack in a statement posted on its Telegram account. The gunmen were caught by surveillance cameras firing assault rifles on a main street of the normally quiet town in central Israel. They arrived in Hadera heavily armed with a large arsenal of pistols, automatic rifles, knives, a box of ammo including stolen IDF grade 5.56 caliber bullets, as well as gloves. They were evidently bent on a large-scale assault with many casualties before they were cut short.

Police descended in force on the Israeli Arab town of Umm al-Fahm and arrested five suspected confederates – three of them local residents, a brother and two cousins of one of the gunmen. One is suspected of aiding in the attack; four of belonging to a clandestine ISIS cell.

Prime Minister Naftali Bennett stated early Monday: “A second attack by Islamic State supporters in Israel calls for security forces to adapt quickly to a new threat, and they have,” he said. This was a reference to the deadly terror attack in the southern city of Beersheba six days ago, in which an ISIS supporter murdered four civilians in a stabbing-car-ramming spree.

“I urge citizens to continue to be vigilant,” said the prime minister. “Together, we will be able to defeat this enemy, too.” Bennett commended the heroism of the two border police officers who died in Hadera “while protecting civilians with their bodies. We will not forget their heroism. I wish a complete recovery to the six wounded victims and send my deepest condolences to the families,” Bennett said.

Both attacks in Beersheba and Hadera were perpetrated by Israeli Arab citizens – the first a resident of the Bedouin town of Houra in the Negev, the second from the Arab town of Umm al-Fahm in central Israel. The Shin Bet domestic security service is investigating itself to find out how they missed pinning down the peril posed by two terrorists from Umm al-Fahm, at least one of whom was known to them.

Police chief Kobi Shabtai ordered a high alert across the country, bolstered patrols in the town centers and set up roadblocks and checkpoints on the main highways. The army has deployed four extra units to Judea and Samaria and is stepping up training exercises.

US Secretary of State Antony Blinken, and four Arab foreign ministers, who arrived Sunday afternoon to join FM Yair Lapid for a conference in the Negev, tweeted Sunday night: “We condemn today’s terrorist attack in Hadera, Israel. Such senseless acts of violence and murder have no place in society. We stand with our Israeli partners and send our condolences to their families.

The conference is due to end later Monday with a joint communique.