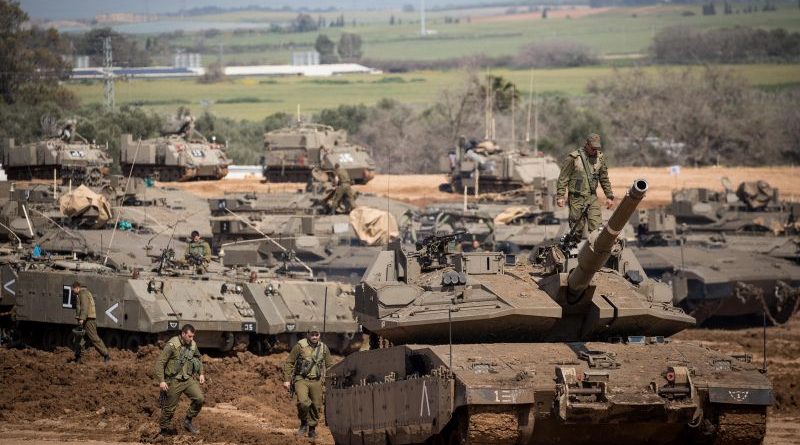 IDF tanks early Saturday, Aug. 22, pounded Hamas positions in the Gaza Strip after Iron Dome intercepted an incoming Palestinian rocket Friday night.  A second rocket fell short inside Gaza. After conferring with Defense Minister Benny Gantz, Chief of Staff Lt. Gen. Aviv Kochavi approved a plan drawn up by the Southern Command with intelligence input for different scenarios. The minister stated on Friday that the IDF stands ready to defend the citizens of the South. “Any aggressor should expect to sustain extremely damaging blows,” he said.

On Saturday, Gaza’s terrorist groups announced they had joined forces to respond instantaneously to Israel attacks on their positions, “according to agreed rules of confrontation.”  In a statement to the Lebanese Al Akhbar, the factions reported they had also agreed that for the death of any of their leaders at Israel’s hands, they had prepared a response “against specific targets to be revealed at the proper time.”

In the past week, the Palestinians launched from Gaza 17 rockets against neighboring Israeli communities. Friday saw 30 fires ignited by balloons.

More Iron Dome defense batteries were posted to southern Israel and farmers told to stay away from fields abutting the Gaza Strip early Friday, Aug. 21 amid escalating Palestinian violence. Roads to the Gaza region were closed and the Zikkim beach cleared of bathers, as the arson and incendiary balloons continued to plague southern Israel, setting 16 fires, two of them in the Hof Ashkelon region.

This continued uninterrupted after a turbulent night: The Palestinians launched 12 rockets – 9 were intercepted, one smashing into a Sderot home. The IDF hit back in three waves to demolish Hamas rocket production and military facilities, after which the IDF’s Southern Command held an urgent review of the situation with Chief of Staff Lt. Gen. Aviv Kochavi.

They also heard heads of the communities targeted for Palestinian aggression complaining bitterly that while the country was celebrating the “peace for peace” deal with the UAE, Sderot citizens cowered in bomb shelters in a war zone.

During a night on Thursday, broken by repeated Palestinian rocket fire, three women were treated for shock and a third was hurt when stumbling while running for shelter.
This was the IDF’s 12th day in a row of strikes against Hamas military sites and it continued up until 6 am Friday morning.

The Palestinian rocket fire came on top of the hundreds of arson and incendiary balloons launched against Israel in the past two weeks. On Tnursday, 42 fires were ignited by balloons from the Gaza Strip. The IDF reported that 15 incoming clusters were intercepted by the new “Light Flame” laser device devised to counter terrorist balloons for the Border police force

From a safe place in friendly Turkey, Hamas leader Ismail Haniyeh threatened to raise the stakes with a renewed cycle of violence, unless Israel complied with the long list of demands submitted by the terrorists via Egyptian intelligence officers who  shuttled between Tel Aviv and Gaza this week. Hard cash may be the only answer acceptable to the Palestinian Hamas for buying calm. Tensely awaited is a decision by Qatar about whether or not to continue its $25m aid program to Gaza when it runs out next month. Meanwhile, the Erdogan government is being solicited for terrorist funding. Some military sources speculate that Hamas has become over-confident, believing that Israel’s rickety government is in no shape to embark on a major military campaign in the Gaza Strip while struggling to beat down the covid-19 pandemic and rescue the troubled economy.