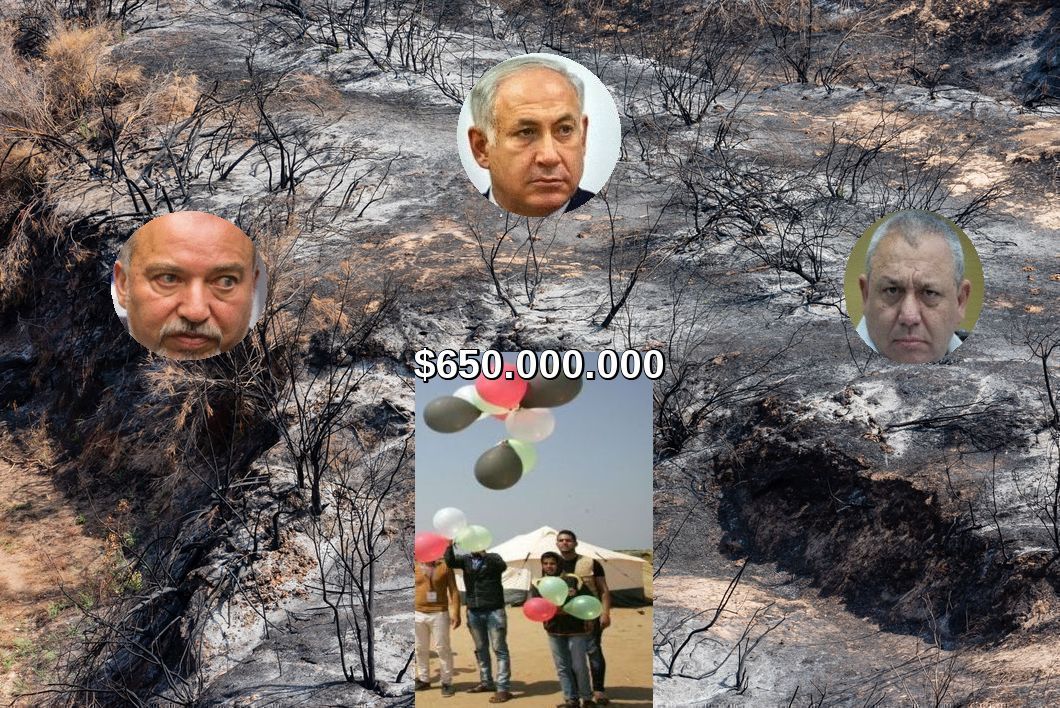 Hamas has burned to a cinder more than 35,000 dunams of flourishing Israeli land – half the area of Tel Aviv, the whole of Beersheba – since launching its “March of Return” on March 31. But if the Palestinian terrorist rulers of Gaza walk off with the $650m aid package the UN, Egypt and Qatar are offering for a long-range truce accord with Israel – applauded by Washington – they will win the biggest prize ever awarded a serial arsonist.

During Hamas’s 11-year rule, billions of aid dollars have poured into Gaza to ease the pain of a suffering populace, but only a fraction reached its destination; the lion’s share was spent on “resistance” – i.e., consolidating Hamas’ terrorist wing, the Ezz-e-din al-Qassam and its unrelenting campaign of violence for displacing the Jewish state.

Under the new deal, Hamas will make a cool $162,500 for every month of rocket fire against Israeli towns and villages, attacks on the Israel border fence, gunfire and firebombs aimed at the Israeli troops defending the border, the sabotage of IDF equipment, and arson by incendiary kites and exploding balloons.

Nonetheless, IDF Chief of Staff, Lt. Gen. Gady Eisenkot concluded last week that Hamas terrorist chiefs, having failed to achieve anything by a host of different brands of violence, would again lose out in its campaign of arson. But it is that very campaign which has triggered the international plan to cap Hamas’ success with an exceptionally generous truce package. It stands to be rewarded with such perks as a multi-million dollar bounty; a berth at the Egyptian Suez Canal city of Port Said; a landing strip in northern Sinai’s El Arish air field; the lifting of the Israeli and Egyptian blockades on the Gaza Strip; the opening of both border crossings; more electricity power from Israel; and a large desalination plant. All in all, not such a bad haul for four months of “different brands of terror.”

The final straw for the IDF – and the most humiliating – was its failure to stop the most primitive of terror tools, balloons. It achieved what four months and 500 Hamas rockets and mortar shells failed to do.

From the perspective of Washington, arrangements are falling into place for Israel’s northern and Gaza fronts to settle down. Russia has taken direct charge of the Syrian borders with Israel, while the US, through the Bulgarian UN mediator Nikolai Mladanov and Egypt, is gaining a remote handle on the Gaza-Israel imbroglio.
Israel’s leaders may pat themselves on the back for dumping the two perils in the laps of Russia and America. But the arrangements taking shape are hardly likely to be sustainable for long, given the bad actors involved. With Syrian/Hizballah/pro-Iranian Shiite troops ensconced at the edge of the Israeli Golan, and Hamas only biding its time between truces for another onslaught, those arrangements are about as stable as a house of cards in a storm.

46 thoughts on “Israel entrusts its North Front security to Russia, Gaza – to indirect US intervention”