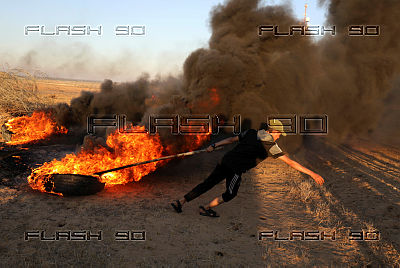 In the first airstrikes ordered by Prime Minister Naftali Bennett, Israeli warplanes bombed Hamas military compounds early Wednesday, June 16. The IDF said they were in response to the launching of incendiary balloons into Israeli territory for which Hamas was responsible. The attacks targeted compounds that were sites of “terrorist activity.” said the statement and stressed: “Israel is prepared for any scenario including the resumption of warfare in the face of terrorist activities emanating from the Gaza Strip.”

While most of the balloons sparked more than 20 fires in nature reserves and farmland, at least one exploded over a populated area. Meanwhile dozens of Palestinians clashed with Israeli troops along the Gaza border. According to Palestinian sources, the bombardment hit targets in Khan Younes in southern Gaza and the Yarmouk refugee camp.

In Jerusalem, thousands marched in the annual Flag Parade in the face of Hamas threats of retaliation. The Iron Dome deployment in southern Israel was beefed up. The new government and its prime minister therefore faced two tests on their second day in office after talking the helm from Binyamin Netanyahu. The new flareup was the first since  the Egypt-brokered ceasefire of May 21 ended an 11-day Gaza conflict during which thousands of rockets descending on Israel were met with a systematic Israeli bombing campaign against Hamas.The new government’s decision to go forward with the annual Flag Parade – albeit rerouted to avoid the Muslim Quarter – and hit back at Hamas were taken after a situation assessment on Tuesday night led by defense minister Benny Gantz with IDF Chief of Staff Aviv Kohavi, Shin Bet head Nadav Argaman, IDF Intelligence Directorate head Maj.-Gen. Tamir Heiman, IDF intelligence analysis chief Brig.-Gen. Amit Saar and Defense Ministry Policy and Political-Military Bureau head Zohar Palti.