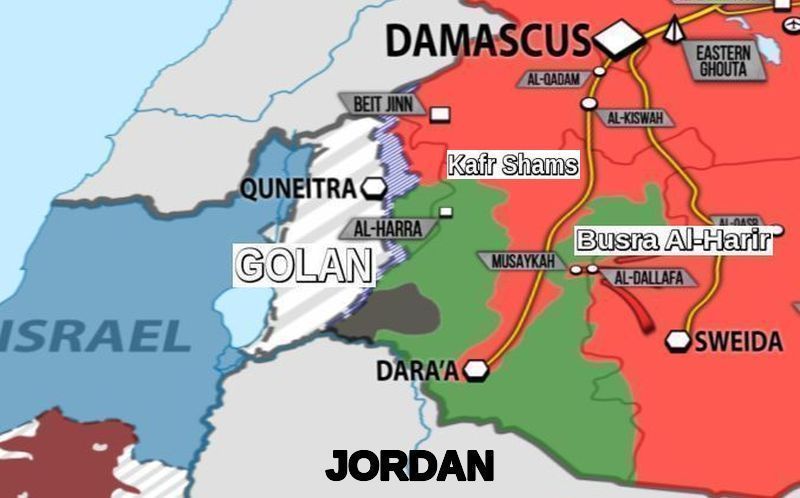 Prime Minister Binyamin Netanyahu has plunged into multipartite diplomacy while directing Israel’s armed forces to spearhead operations for driving the Iranian military out of Syria. His short-term goal is to establish cordons sanitaire on Syria’s borders with Israel and Jordan. These operations have ended Israel’s long non-engagement in the Syrian conflict and catapulted the IDF into frontline operations in areas covering more than one-fifth of Syrian territory.

On Monday, June 18, Netanyahu traveled to Amman for a few hours to hold talks with Jordan’s King Abdullah, two days after the monarch announced that, having recalled his ambassador from Tehran, he would not appoint a replacement. This announcement coincided on Saturday, June 16, with an Israeli strike against the Pantsir S-1 or S-22 anti-air batteries, which the Syrian army had on June 12 positioned opposite Quneitra on the Israeli border and in Daraa near the border with Jordan. Both regions are held by Syrian opposition groups maintained by the US, Israeli and Jordanian armies.

Intensive diplomacy led up to this Israeli operation.

The Israeli prime minister first warned US Secretary of State Mike Pompeo that those batteries must be removed, because they would restrict Israeli and Jordanian aerial operations in the event of the threatened Syrian army push towards their borders. Pompeo relayed the warning to Moscow, asking the Russians to order the Pantsir batteries to be pulled back. No reply was forthcoming.

The next day, a Friday, the Israeli prime minister was on the phone to Russian President Vladimir Putin and explained why Israel could not lie down for the presence of the Russian-made Pantsir missiles along its borders. Even then, the batteries remained in place. On Saturday, therefore, the IDF went into action to smash them, for the first time using precise Tamuz short-range ground-to-ground missiles rather than air strikes, in case Russian air defense teams had slyly planted an aerial ambush for Israeli air force jets.

This incident betokened the high level of suspicion, mistrust and military tension prevailing among the diverse military players involved in southwestern Syria.

In an effort to allay the tension, Putin made Netanyahu an offer: He would persuade Syrian President Bashar Assad to accept a deal, whereby all the Syrian opposition groups holding territory in the border regions would declare a truce in their fight against the Syrian army and be allowed to remain in place with their families. The Russian president did not name the governing authority that would control these regions. He did emphasize that no force other than the Syrian government’s army would come near the borders of Israel and Jordan, and Iranian and Hizballah units would be kept out.

President Vladimir Putin’s proposal is under positive consideration in Washington, Jerusalem, Amman and the Syrian opposition.

Meanwhile, Tehran was on the move: On Sunday, June 17, a sizeable force of the Iraqi Shiite Popular Mobilization Units (PMU) was detected crossing into Syria from Iraq by US, Israeli and Jordanian surveillance when it reached the Al-Hari village, east of Deir ez-Zour and north of the US outpost of Al-Tanf (see attached map). The force consisted of two brigades of the Iraqi Shiite Kata’ib Hezballah militia, which belongs to the Iranian backed Popular Mobilization Units (PMU) federation of Iraqi Shiite militias.

DEBKA Weekly’s intelligence sources recall that 12 years ago, this militia’s chief, Qais al-Khazali, sent troops to Lebanon to fight alongside Hizballah in the 2006 war with Israel. And last December, al-Khazali popped up again in Lebanon. He was seen taking a guided tour of the Lebanese-Israeli border with Hizballah commanders and marking out positions for his Iraqi Shiite troops to take over against IDF defense lines.

The crossing of this Iraqi militia into Syria was interpreted by all the intelligence bodies viewing the area as a bid by Tehran to demarcate a military corridor for isolating the US forces based in northern and eastern Syria from the strategic US Al-Tanf outpost. Once in place, the Kata’ib Hezballah brigades were to have set up a bridgehead for Shiite forces to surge into Syria from southern Iraq and split up for deployment on the Jordanian and Syrian borders.

Intelligence authorities doubt that the Russians were in the picture or had received a heads-up on the Iraqi-Shiite militia’s move into Syria. Since US and Israel were clearly of one mind on this assessment, Secretary Pompeo gave Netanyahu the go-ahead signal to wipe out the Iraqi force, before it gained ground in Syria. It took the Israeli Air Force five hours on Monday night, June 18, to complete the mission, operating in two waves: first, fighter jets, then armed drones and helicopters. The invading force is believed to have sustained some 400 dead and wounded casualties.

That major operation gave Netanyahu a head wind for his trip to the Jordanian capital later than day to discuss with King Abdullah how best Jerusalem and Amman could coordinate their actions against the common threat hanging over the two neighbors from Syria and Iran.