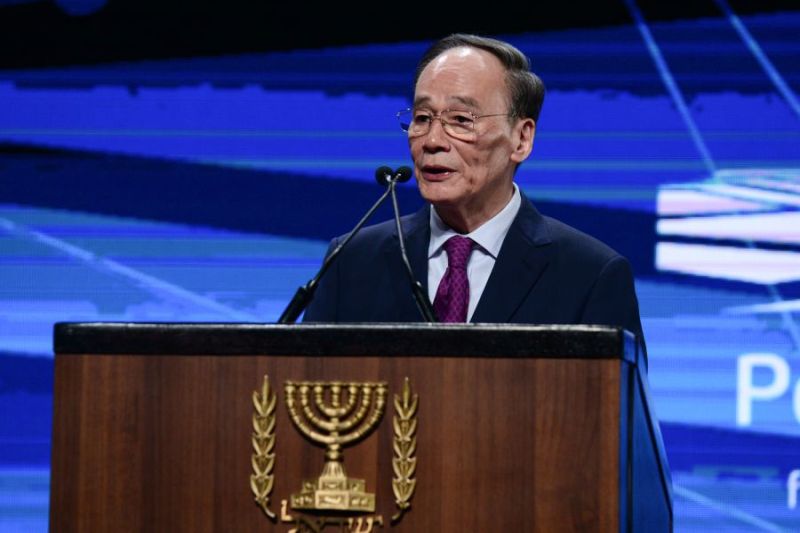 China’s Vice President Wang Qishan arrived on an official visit to Israel on Monday, Oct. 21 with a party of officials from 13 ministries and a bevy of business leaders. He was to co-chair with Prime Minister Binyamin Netanyahu a meeting of the China-Israel Joint Committee on Innovation Cooperation that was established in May 2014.

Trade between the two countries increased to more than $13 billion in 2017. In the first half of 2018, Israeli exported to China $2.8 billion worth of goods, 8.7 percent of its total exports in that period. This amounted to a 73 percent increase year-over-year. Chinese investments in Israeli tech companies nearly doubled between 2013 and 2017.

The expanded trade relations between Beijing and Jerusalem prompted the contention by The Economist, on Oct. 11 that they were raising security concerns. The point was illustrated by this tale: “The chief of one of Israel’s intelligence agencies was recently surprised to discover that Chinese construction workers on a major building project might be able to see into a sensitive installation.” The magazine went on to say: “But it is in keeping with a trend. Israeli security officials are growing increasingly uneasy with China’s expanding role in the economy, particularly its involvement in several big infrastructure projects and its purchase of cutting-edge technology.” Furthermore, The Economist contended: “The concern falls into broad categories, The first is over Chinese control of strategic infrastructure and the possibility of espionage.”

The prestigious magazine further homed in on the new commercial shipping facility in Haifa as “run by the Shanghai International Port Group, which won the tender in 2015 and began working on the site in June. Haifa is Israel’s busiest port and the base of its main naval fleets. Israeli submarines widely reported to be capable of launching nuclear missiles, are docked there. Yet the deal with the Chinese firm was never discussed by the cabinet or the national security council.”

The writer went on to maintain that US Sixth Fleet vessels, which were at home in Haifa port, have discontinued their visits and joint training exercises for fear that the Chinese working on the new shipping facility can spy on them.

DEBKA Weekly’s intelligence sources, after looking into The Economist story, found the Haifa segment to be unfounded. In the first place, US Sixth Fleet ships continue to dock at Haifa port. Furthermore, the new facility the Shanghai group is building is 800meters long and nowhere near the Israeli Navy’s base at the port. The Chinese firm has no control over which ships enter or leave the port. The traffic is regulated solely by Israeli port and security authorities.

But aside from the non-issue of Haifa port, there is some concern in high-placed Israeli circles about the prospect of a possible Chinese economic invasion. Another article, this one published by the Chinese University for International Relations., which is closely associated with the Chinese intelligence service, summed up Beijing’s political doctrine in the phrase: “First the civilian, then the military.” China’s involvement in building commercial ports in foreign countries was defined as the first stage towards transforming them step by step into strategic jumping-off bases for China’ control of strategic waterways.

There is also some unease in circles in Jerusalem and some Western capitals about Chinese investments in Israel tech industries.

Up until the end of 2017, Chinese investments in Israeli startups totaled $6.5 billion, the equivalent of 12 percent of all the capital raised by these companies between 2015 and 2017. Of late, high-ranking Chinese officials are coming more frequently and laying the groundwork for mammoth transactions. In August, the Chinese Minister of Science and Technology, Wang Ji-Gang, said on arrival that his government attaches the utmost importance to innovative technology as the engine which drives the development of the modern economy. He also said that China’s door is always open to Israeli technology.

Vice President Wang, 70, who arrived this week, is the highest-ranking Chinese visitor to Israel in at least a decade. Known to be close to President Xi Jinping, he is fairly new in his job, having been appointed in March. A former mayor of Beijing and a banker, Wang also served as secretary of China’s anti-corruption body, the Central Commission for Discipline Inspection.

The expanding ties between Jerusalem and Beijing are increasingly discussed in Trump administration circles, especially amidst its trade war with China. There are concerns that Israel tech may find itself way into China’s armed forces. In the Pentagon, there are worries that the artificial intelligence programs China is acquiring, through investment in civilian projects and licensing deals with Israel, will be incorporated in the new generation of Chinese weaponry that threatens the United States and its allies. “If an American pilot were to be shot down by a Chinese missile armed with Israeli technology, the administration would have a real problem with the Israeli government,” said an American security expert not long ago.

US disquiet focuses on two areas: China is so fixated on artificial intelligence that it may well turn to Israel after being turned away by the United States or Europe. Beijing has furthermore not disguised its eagerness to study how Israel developed its armed forces so as to apply those methods to the Chinese military.

At the same time, some of those concerns are disproportionate. Chinese investments are spread over many countries and have been for some years. Israel is new terrain, and the Chinese have so far invested in the Jewish state no more than $15 billion in all, a fraction of the $120 billion the Chinese spent in only one year in 2017. In terms of China’s global reach, Israel is a small player.