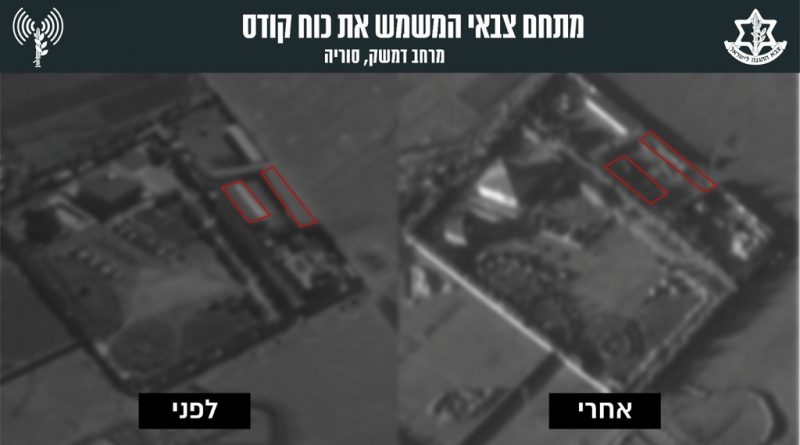 The IDF exposed the secretive Iranian al Qods Unit 840 operating in Syria on Thursday, Nov. 19, while drawing a threat from Tehran to “enemies and terrorists” of a :harsh revenge” for their “crimes against the Iranian nation. This was in response for a multiple Israeli air strike Tuesday night on a row of eight Iranian and Syrian sites in southwest Syria. Ali Shamkhani, Iran’s national security chief, said, “There is no safe and impenetrable haven for criminals and ill-wishers… that the “powerful hands of the Islamic Republic’s defenders cannot reach, sooner or later…”

The semi-clandestine Iranian al Qods Unit 840 that planted on the Israeli Golan the the anti-personnel mines and improvised explosive devices, which the IDF defused on Tuesday, was revealed by DF spokesman Brig.-Gen. Hidai Zilberman two days later. Unit 840 is responsible among other things, for planning and establishing terror infrastructure outside Iran, he said, for hitting Western targets and opposition groups. He reported that the anti-personnel mines discovered on Monday were planted several weeks ago by local Syrians under the command of the IRGC’s Qods Force, under the close watch of Israeli patrols and reconnaissance drones.

The targets included in Israel’s air raid were an Iranian military complex near Damascus International Airport, a secret military barracks housing high-ranking Iranian officials as well as visiting delegations, a command post for Division 7 of the Syrian army which cooperates with the Quds force, and mobile surface-to-air missile trucks which aimed fire at the Israeli jets during the strikes.

Israel rarely confirms its air strikes over Syria. The last such episode occurred 68 days ago, creating a relatively long pause in those Israeli attacks. However, the IDF spokesman this time issued several detailed statements after the event and released several videos and satellite images.

Defense Minister Benny Gantz, who was inspecting the Northern Command on Tuesday, held Syria responsible for any aggression emanating from its territory. “We have long been prepared for the possibility of terror attacks in the northern sector,” he said. “The IDF has the capabilities and the determination to respond severely to any incident – both on the Lebanese and Syrian fronts.”

Iron Dome batteries have been deployed to the northern borders and ground units are on elevated alert for any further escalation.