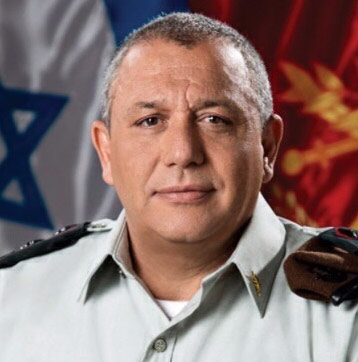 That comment was consistent with the words last week of a “high-ranking IDF officer,” who explained: “When calibrating its response to rocket fire from the Gaza Strip, the IDF must take into account the need to preserve Hamas’ deterrent strength against Salafi terrorist organizations.”
The chief of staff was speaking Tuesday, Jan. 2 in a wide-ranging lecture at the Interdisciplinary Center in Herzliya. Expanding on the theme that the IDF would be wrong to use maximum force against rocket fire from Gaza, Gen. Eisenkott laid out the following rationale: Hamas in Gaza is making a great effort to set up anti-Israel terrorist attacks in Judea and Samaria and inflame the ground there – “motivated by its wish to keep the Gaza Strip calm.” To this end, he said, Hamas is plotting ISIS-style lone wolf terror attacks in Judea and Samaria.
Does this mean, DEBKAfile’s military sources ask, that Israel must endure regular rockets attacks to save Judea and Samaria from terror? And is this the rationale for preserving Hamas’ deterrent strength? How would this formula stand up if a single Hamas rocket hit Ben Gurion international airport? No one doubts that the Eisenkott rationale would be dumped and the order go out for the IDF to do as much as it can and what it knows best.
“We have passed two difficult years, but have managed to stabilize the situation there (in the Gaza Strip) by dint of the right policy,” the Chief of Staff said.

The Palestinians fired 30 rockets in as many days? Is that proof of the right policy?

He then turned to the Iranian Revolutionary Guards’ investment in building machines of terror. A cool billion dollars, for instance, is funneled year by year to the Lebanese Hizballah terrorist organization; several billions are sunk in the war in Syria; hundreds of millions per year are earmarked for fomenting the war in Yemen and a similar sum goes to the Gaza Strip’s terrorist groups. Continuing his lecture, Eisenkott noted that Hizballah has undergone many changes in recent years “to become Iran’s messenger in the region.”  He stressed that, in his view, “Israel faces its most serious threat from the northern front in Lebanon.”

The facts on Iran and Hizballah were recounted as if they are unrelated to the Gaza Strip and Palestinian rocket fire. That is where the chief of staff has got it wrong, military experts tell DEBKAfile. Iranian strategists, while busy holding down increasingly violent protests at home, will undoubtedly have picked up every word uttered by the Israeli chief of staff. They will have drawn operational conclusions from his words for referring to both Hizballah and Hamas through the same channels as Iran supplies them with cash, rockets, and mortar shells.
The disquieting message conveyed by Gen. Eisenkott is that Israel’s military leaders are willing to tolerate rocket fire on strategically peripheral targets without ratcheting up IDF responses beyond the current slow level. The danger here is that it leaves Iran, Hizballah and Hamas with the initiative. It is up to them, not Israel, to determine what situation suits them best on Israel’s northern borders with Syria and Lebanon and its southern border with Gaza.