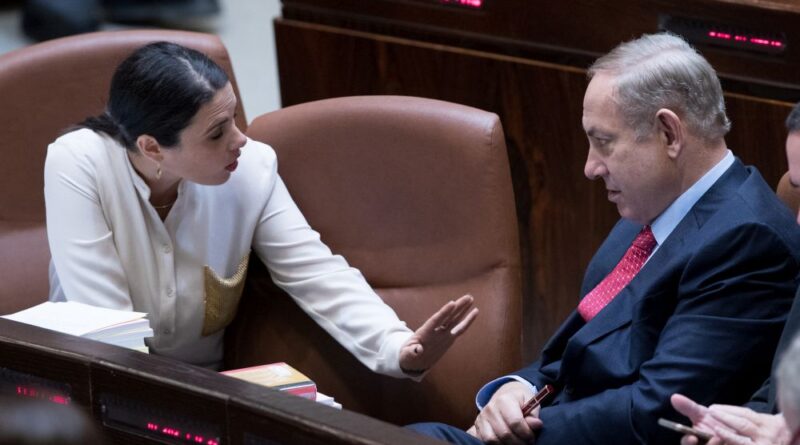 With one exception, the campaign for the Nov. 1 vote kicked off this week with the same two embattled blocs that bitterly deadlocked the four previous elections of the past three and a half years.  Surprises can’t be ruled out in the coming four-month campaign as the eight-party ruling bloc (“Just not Bibi”) and the Likud-led opposition reach for an elusive majority in the 120-member Knesset.

It so happened that Naftali Bennett’s exit as prime minister, making way for his partner Yair Lapid to head a caretaker government, was responsible for that exception. Proudly presenting his unifying feat as prime minister at the head of a cabinet ranging from far right to far left, Bennett promoted as his successor at the head of the right-wing Yamina party the only minister willing to serve in a government led by Binyamin Netanyahu, Interior Minister Ayelet Shaked. If she wins the five seats projected for that party in November (down from 7 in the last election), she offers the Likud leader his first glimpse of a 63-seat majority.

There are enough unknown variables to turn this prospect on its head once negotiations among the rival parties begin in earnest. The early talks are as yet confined to the ruling bloc, which unseated Binyamin Netanyahu in March 2021 and ruled for just over one year, to become the shortest-lived government in Israel’s history. However, four of its eight member parties are currently scrambling for footholds after being judged by opinion polls incapable of surviving the threshold limits for entering parliament.

One of them, Gideon Saar’s right wing New Hope, is in talks for jumping aboard the much stronger Defense Minister Benny Gantz’s Kahol Lavan (who polled 9-10 seats). And so is one of the Yamina defectors, MK Kahane. Together, they could establish an attractive new centrist party capable of chipping away at Yair Lapid’s dominant Yesh Atid (Future) which polls around 19-20 seats, second only to Likud’s 34-35. On the other hand, the interim prime minister may pick up remnants of the sinking factions.

Gantz has grown into an alluring property drawing suitors from both blocs. Although they are proven foes, the defense minister is said to be quietly considering an offer from Netanyahu to stay in place with the broad authority he enjoys at present, and other perks. He would provide Netanyahu’s bloc with an unbeatable majority.

The Likud leader might also profit from a low turnout in the Arab sector, which is disenchanted with the performance of its two parties and still more with that of the far-right Meretz party, although its leader, Horowitz is seen as working well as health minister. A merger with another limping ruling faction, Labor, would help both to stay on their feet.

While Bennett is generally seen as having been an unexpectedly good prime minister, with success in critical areas. He followed up on Netanyahu’s wwork in curbing the covid pandemic without, however, imposing a lockdown; Israel enjoyed several months without Palestinian rocket fire from the Gaza Strip; a state budget was finally enacted after a two-year pause; the Iranian threat appeared to be checked.

Nonetheless, Shimrit Meir, who quit her job as one of his top advisers, diagnoses Bennett a flop as a political leader. He failed to read the signs of revolt in his own Yamina party, which finally robbed the government of its wafer-thin Knesset majority and brought about its downfall.

Bennett, who is taking time out before a comeback, himself broke away from the historic National Religious Party to form Yamina. The movement split, with Yamina joining the anti-Netanyahu camp whereas the Religious Zionist faction, led by Itamar Ben-Gvir and Bezalel Shmotrich, stuck with the Netanyahu bloc. The pair is fast gaining ground (up to 9 seats). Shaked will therefore have her work cut out to prevent Yamina from becoming redundant and vanishing from the political checkerboard.