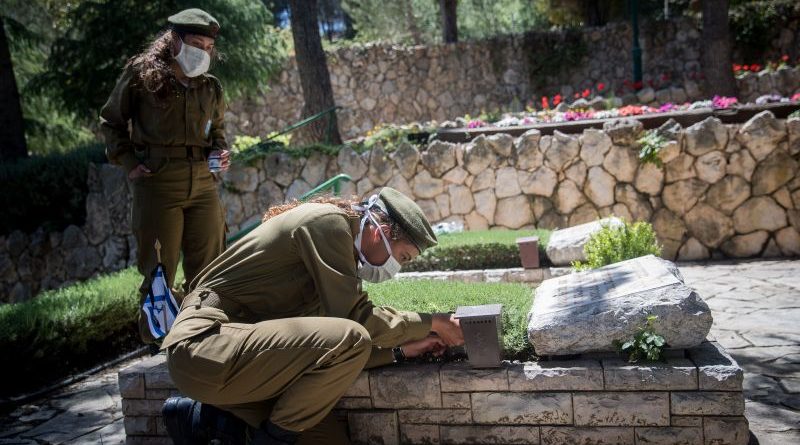 With the traditional annual visits to Israel’s 52 military cemeteries barred by the coronavirus pandemic, bereaved families are lighting virtual memorial candles in private or decided to pay solitary graveside visits a day or two before Memorial Day on Tuesday, April 28. They lamented the annual ritual and missing out on their customary get togethers each year with fellow mourners and the former comrades and commanders of the men they lost in battle.

The number of Israeli men and women fallen in combat stands at 23,816, according to updated Defense Ministry figures. Since last year, 42 new names of soldiers killed in action were added, together with 33 disabled who died of former wounds.

On Monday, at 8.00 p.m. a one-minute siren marks the start of the day of mourning in an official ceremony at the Western Wall led by President Reuven Rivlin and IDF Chief of Staff Lt. Gen. Aviv Kochavi (without audience). Also broadcast will be a pre-recorded “Songs in their Memory” program, during which the names of the fallen will be flashed across the walls of the Knesset. Two minutes silence will be observed at 11.00 a.m. on Tuesday when the main memorial service takes place on Mount Herzl and is broadcast to the nation.

At 1.00 p.m., a state ceremony, also broadcast live, will memorialize the victims of terrorism in Israel and abroad. Altogether 3,153 people were murdered by terrorists, including 120 foreign nationals who died in Israel and 100 Israelis killed in attacks overseas.

Before these ceremonies, soldiers, security officials and staff from the ministry’s Family, Memorial and Heritage Department visited every military grave site from Kiryat Shemona in the north to Eilat in the south, lowered national flags to half-mast and left a “Yizkor” ribbon and a bouquet of flowers.

Independence Day begins at the end of Memorial Day, both occasions taking place as the country is held under a strict 48-hour lockdown in the shadow of the coronavirus pandemic.