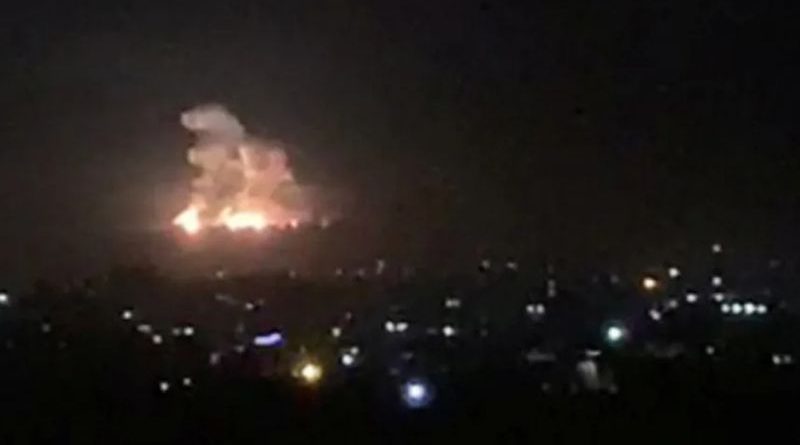 It has become almost personal.

The Iranian general had set in motion a plan for dragging Israel into a drawn-out war of attrition on multiple fronts, Syria, Lebanon and the Gaza Strip, whereas the Israeli general had set about cutting short this descent into prolonged, debilitating engagements by forceful assaults on Iranian targets and those of its allies. These strikes are landed as surprises. Tehran never knows what is coming, when or where.

This week, the IDF and Al Qods traded direct blows in Syria, putting up a road sign for the contest’s new direction. The hostilities that erupted last week from the Gaza Strip, with 450 rockets fired by the Palestinian Islamic Jihad, countered by devastating IDF bombardments of its military infrastructure, were revealed as the promo of Soleimani’s master plan.

They were also a distraction from Iran’s latest project in Syria. DEBKA Weekly’s military sources can report exclusively that, amid the fury of IDF-Palestinian clash in Gaza, Israel’s military satellites and spy planes picked up images of advanced construction near the Syrian-Iraqi border town of Abu Kamal of the IRGC’s largest military base outside Iran. They called it the Imam Ali Military Base. This spacious compound had room for large depots of ballistic missiles, ammunition and assorted drones as well as quarters and services for 3,000 men.

For the first time, Al Qods commando forces were caught on film disembarking from Iranian Air force cargo helicopters to land at training grounds attached to the Imam Ali base.

From Israel, the Islamic Republic was seen to be establishing a formidable military bastion of aggression against the Jewish state on its doorstep. For Tehran, it was to be a link in its prized corridor through Iraq for consolidating its grip on Syria and Lebanon.

Early Tuesday, Nov. 19, Israel’s air force wiped out large sections of this compound, including the missiles piling up there, in one of its broadest bombing raids ever. The attack homed in on the troop concentrations massed by Al Qods and pro-Iranian Iraqi Shiite militias on both sides of the border – in eastern Syria and western Iraq.

Details of this huge operation are kept a closely guarded secret by the Israeli military, which declines even to correct official Syrian accounts. However, DEBKA Weekly has detected strong clues to its scale in the IDF’s advance preparations.

On Sunday Nov. 11, a snap military exercise was announced in northern Israel. Towns and villages on the borders with Syria and Lebanon were warned in advance to expect sirens for air or rocket attacks and large explosions. Reservists were called up for the first time through a special application loaded on the phones of combat troops in reserve units. Large-scale forces were deployed on the Israel-Syrian border on the Golan and air defense batteries placed on alert.

This entire array was put in place – notably, just 48 hours after two large rockets were aimed from the Gaza Strip at the southern Israel town of Beersheba. An agreed ceasefire on Thursday, Nov. 14 had slowed Jihad’s main round. This unexpected volley was designed to keep the IDF’s focused on retaliation for an attack on an important city, and so sucked into an interminable confrontation with the Islamic Jihad in Gaza as per Soleimani’s strategy.

However, the IDF chief had meanwhile turned his attention away from the Gaza front. His next moves were signaled by a throwaway remark when the Israeli military accepted the Gaza ceasefire: “Now we can concentrate on the northern front,” he said.

The unusual Israeli buildup in the north was observed by the Iranians. Baffled about what was afoot, they resorted to pre-emptive action. Al Qods units were posted at launching points between Damascus and Quneitra opposite the Israeli Golan, and told to fire four Fateh-111 ballistic missiles into Israel. With a range of 500km, they could have reached the most densely populated central region. All four were intercepted by Iron Dome defense batteries before they fell.

It was Iran’s first missile attack on Israel since May 2018. It supported of Tehran’s oft-repeated threat in recent months to hit back with rockets for every Israeli attack.

This week, both Israel and Iran crossed an unmarked line in the sand. Until now, Iran largely used proxies like Hizballah and Islamic Jihad for its war on Israel. Now, Tehran had gone for direct action. Israel reacted without pause. On Wednesday, Nov. 20, the Israeli Air Force hammered 20 Iranian and Syrian military targets, most in the Damascus region – half of them belonging to Al Qods. DEBKA Weekly’s sources report that Israeli warplanes raked through a line of Al Qods military positions south of Damascus up to the Syrian Golan. Six Syrian air defense batteries were knocked out at the same time. A large part of the Iranian/Syrian battle formation facing Israel’s Golan border with Syria was leveled. An Israeli security source reported the next day that 10-20 people had been killed, most of them Iranians. Soleimani’s next move is tensely awaited.