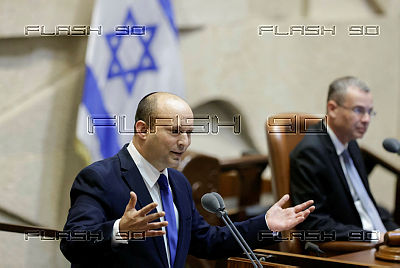 The Bennett-Lapid eight-party coalition that takes office as Israel’s next government on Sunday afternoon, June 13, was glued together through tortuous negotiations by a common drive: to end Binyamin Netanyahu’s long reign. Their success may melt that glue. The new prime minister Naftali Bennett pledged earlier that Netanyahu’s successors will serve the people rather than their own interests. But how will Bennett, in his two and-half-years as first prime minister, heading a band of incompatibles ranging from far left to hard right – and many lacking government experience – deliver on this pledge?

Dedicated to the right-wing values of his Yemina party, he will have to whip far-left Meretz leader Nitzan Horovitz and Labor’s Merav Michaeli into line – as well as Arab Israeli Ra’am leader Mansour Abbas. Bennett’s partner Yair Lapid, head of the centrist Yesh Atid, who takes over as prime minister in the second half of the government’s term, is to be foreign minister and likely to follow the non-confrontational path to Washington and diplomacy at large, including the Palestinian issue, that was forged by fellow centrist Defense Minister Benny Gantz.

Hawkish Bennett and his right-wing colleague Gideon Saar of New Hope are committed to a different kind of foreign and security policies. Iran’s nuclear program pressingly awaits their decision. Another hot potato in the sack they have inherited is Jerusalem and its explosive complexities, with direct bearing on Israel-Arab tensions over Gaza and inside Israel. A decision to preserve the religious status quo is challenged by who makes the definition. Civil rights legislation will be a major tiebreaker. The criminal violence plaguing Arab towns calls for urgent action.

However, the architects of the coalition accord, Bennett and Lapid, have also built a major falling-out trigger into their pact.  Each is empowered to veto the other’s and all other government and ministerial decisions. Ayelet Shaked, co-leader of Yemina, was persuaded not to bolt (and take the party with her) by being granted veto power over government legislation and judicial appointments.

However, as finance minister, Avigdor Lieberman, leader of Yisrael Beitenu, whose minions also control the Knesset finance committee – will be able to out-veto them all. This ruthless politician, with the discretion over how to divvy up the cake among the new ministers, will lose now time in making himself the government’s real strongman.

No mechanism was set up to resolve any deadlocks caused by these veto-holders. This shortfall looms even before opposition leader Binyamin Netanyahu sets out to tear into his successors and their flimsy majority of 61 (out of 120) Knesset seats.

Key posts in the new cabinet: