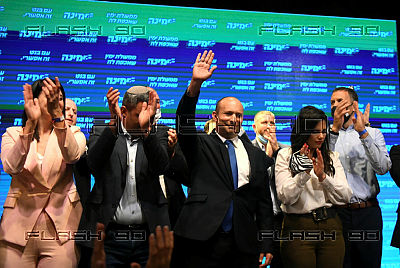 Hopeless remedies zoom over Israel’s parties as they struggle frantically to conjure up a working government out of a deadlocked system and ward off another costly election, Israel’s fifth in just over two years. Binyamin Netanyahu’s rightwing bloc is crumbling under the pressure of the approaching May 4 expiry of his mandate to form a new government. Opposition leader Yair Lapid’s attempt to hammer 13 mismatched anti-Netanyahu parties into a semblance of unity is bogged down by infighting for the best portfolios and polar differences over policy guidelines.

Meanwhile, the security cabinet met on Monday after three days of Palestinian rocket salvos from Gaza and a second week of violent street outbreaks in Jerusalem. The government is being watched closely to see if it can pull together for a firm decision – either to give ground and de-escalate the tension with the Palestinians or for a punishing blow.

The two rival political camps are while scrounging for the elusive Knesset majority of 61 (out of 120) for forming a government. The most freakish player, Naphtali Bennett (see photo), is bidding to become prime minister by playing both camps, although his right wing Yamina party consists of a mere seven MKs. On Monday, April 26, he again came down in support of a rightwing government, after sketching a deal with the opposition’s Lapid (17) to become rotating prime minister in the first two years of their would-be government partnership. Lapid, after serving as foreign minister, would then take over as prime minister. He suspects, however, that he is being played to boost Bennett’s chances with Netanyahu.

And in fact, a suggestion was floated in the prime minister’s camp for that same Bennett to be given first place in a rotating premiership deal with Netanyahu. This stratagem was advanced to lure another rightwing party, Gideon Saar’s New Hope (6), out of the opposition camp to the Likud-led camp to eke out the precious majority.

Likud defector Saar has so far stuck to his vow never again to serve in a government headed by Netanyahu. However, on Monday, when asked by reporters if he would serve in a Likud government with an alternative prime minister, Saar did not answer.

To keep him in place, Lapid offered Saar the prized Justice portfolio in his future government, with Defense going to Benny Gantz (whose Kachol Lavan scored 6 MKs) and Finance to Avigdor Lieberman’s Yisrael Beteinu (7). Bennett would also need to reserve a top post for his sidekick Ayelet Shaked to keep his Gang of Seven intact, just as Lapid would have to keep plum posts for his following.

But fighting hard for the same posts are also Labor’s Merav Michaeli (7) and far-left Meretz’s Nisan Horowitz (6). They, moreover, refuse to incorporate the views of their prospective right-wing partners, Yamina and New Hope,.in any future government’s policy guidelines. This group is also scheming to draw United Torah away from Netanyahu’s side by offering to keep its Moshe Gafni in the chair of the powerful Knesset Finance Committee. Even then, Lapid would still command only 58 seats and depend on Arab parties – which too are also sorely divided – for a majority
While Bennett is apparently flush with options as kingmaker apparent, many hands are reaching out to knock him off his narrow pedestal. Likud, which views him as a renegade, will try hard to prevent him from being parachuted into the top slot over the heads of Netanyahu’s would-be successors – even as a disempowered stand-in. They may also resist the instalment of a Netanyahu loyalist in the prime minister’s office as a puppet for keeping the seat warm for the boss. Likud’s governing institutions are due to meet in a day or two to confirm Netanyahu’s project to offer Yamina 6 safe seats on Likud’s Knesset list This motion may draw nays from members who will be called on to pay the price.

Bennett is also in trouble with his fellow religious leaders. The Orthodox United Torah party warns him that he would be damned forever if he throws in his lot with an opposition government that includes the outspokenly anti-Orthodox Avigdor Lieberman. Then, too, Religious Zionist Party leader Bezalel Smotrich, who had already put a spoke in Netanyahu’s plans by barring Arab support for a right-wing government, derided Bennet for claiming the premiership with only 7 supporters. He also criticized PM Netanyahu for even-handedly urging “both sides to calm down” after dozens of Palestinian rockets were fired from Gaza and pro-Muslim rioters in Jerusalem attacked religious Jews. “Maybe it’s time to replace him,” the far-right leader commented.

While many pundits are busy writing Netanyahu’s political obituary, they admit that he is a wily operator who has often beaten the odds against him.  One of his favorite tactics is the breakup of rival groups. The skulls on his belt include diminished Labor, riven Kachol Lavan and the split United Arab Front. Saar and Bennett put their heads together on Monday in a move presumed to have closed ranks against Netanyahu’s wrecking ball.

While wielding it in an effort to undermine Lapid’s project of an alternative “government of change,” the prime minister has his work cut out save his own Likud and right-wing bloc from disintegrating before his candidacy as prime minister expires on May 4. Coming out empty-handed would terminate his 12-year run as head of government.