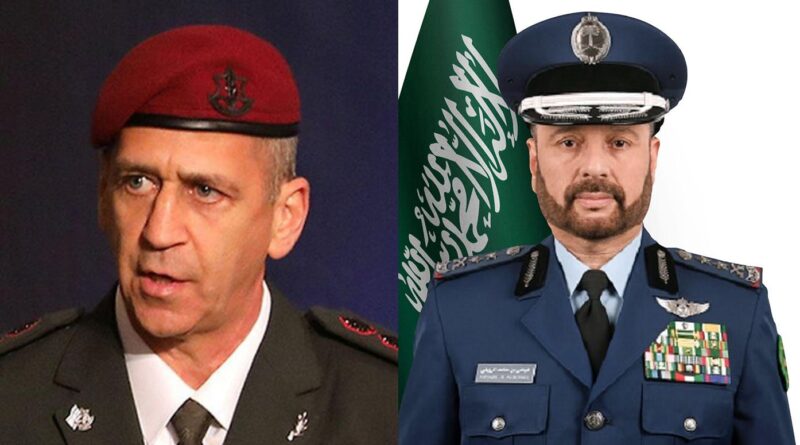 The reported Israel-Arab top brass meeting under US auspices for coordination against Iranian air and missile aggression (WSJ of June 27) may have conveyed the impression of brisk progress towards establishing a Middle East Air Defense Alliance in time for President Joe Biden’s visit to the region next month. The top-secret talks at Sharm el-Sheikh in March were attended by Qatar, Egypt, the United Arab Emirates, Bahrain, Jordan and, together for the first time, the Israeli and Saudi chiefs of staff, Lt. Gen, Kochavi and Gen. Fayyadh bin Hamed Al Ruwaili. (See photo)

But hurdles remain before the project’s takeoff.

Further advanced is naval coordination, which went into action earlier this month in the Red Sea region, where an Israeli fleet of a Dolphin submarine and missile ships joined US and Arab warships in an exercise for securing control of this highly strategic stretch of water.

The Biden administration is keen on the regional aerial coordination project in view of Iran’s air strikes against Saudi and United Arab Emirates, followed last year by a pair of armed drones that the US air force intercepted over Iraq on their way to Israel.

Defense Minister Benny Gantz this week tried to inject momentum into the program when he insisted that the joint air command of the US, Arab allies and Israel had already thwarted Iranian attacks. He declined to offer examples.

At best, the project is a work in progress, say DEBKA’s military sources. The Biden administration’s conception of its command structure is one hurdle. While pushing military ties between the IDF and Arab armed forces with one hand. with the other, Washington wants to hold Israel back from solo operations against Iran’s nuclear program. The compulsion to synchronize operations with the new allied command is an unwelcome handicap for the IDF.

The timing is also unfortunate for Israel on two scores: One, it finds Israel’s top generals in the throes of a dispute over how exactly to deal with the emerging nuclear-armed Iran. These uncertainties threaded through another comment by Ganz, He said on Sunday, June 26, that discussions on how to deal with Iran are still ongoing. This was an oblique reference to reports last week that Maj. Gen. Avraham Haliva, chief of military intelligence (AMAN) and Maj, Gen. Tal Kalman, head of the IDF’s Iran command, have come around in favor of US-Iran negotiations for a renewed nuclear deal, in the face of Prime Minister Naftali Bennett’s strong resistance to this course.

The two Israeli generals ostensibly responsible for getting the military ready for an armed conflict with Iran, appear, therefore, to have cooled to the task. They have in fact come close to the US administration’s policy of reaching a deal with Iran while building a coordinated Air Defense Alliance for countering Iran that would come under overall US command and control.

Gantz himself may be on his way out as defense minister depending on the results of the November election. Israel’s leaders have become caught up in a ferocious election campaign in the coming four months.  Before reaching decisions on the core issue of Iran, Israel’s squabbling politicians must first put together a government after the November election. Tehran has therefore won an extra six months for getting its nuclear objectives firmly in place.