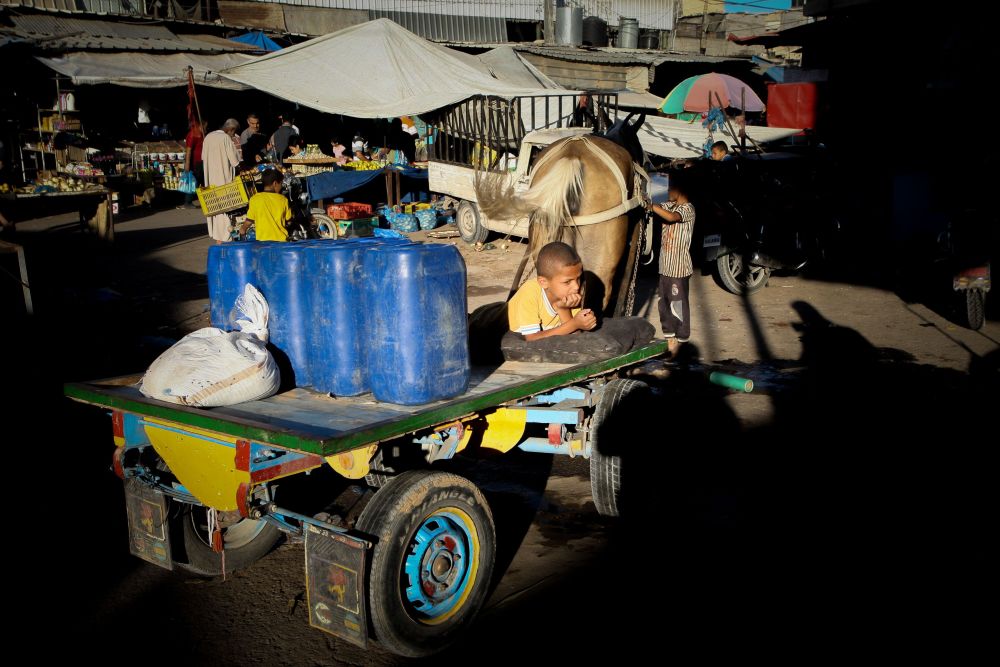 Divergences over the potential blowback of Gaza’s humanitarian crisis among ministers, generals and security services.

No one disputes that the people of Gaza live in wretched circumstances since they came under Hamas rule. The controversy is over 1) the potential of this distress for sparking an outbreak of violence against Israel, and 2) Israel’s responsibility for taking preventive measures.
The IDF chief of staff Lt. Gen. Gady Eisenkott, in a briefing to the cabinet meeting Sunday, Feb. 4, cited a Shin Bet domestic security service assessment. It predicted that the Hamas rulers, who have neither the will nor the ability to solve the people’s problems, will capitalize on their distress (40-50% unemployment) to stage a wave of mass human assaults for battering the Israeli border fence. Israeli troops will shoot to stop the incursion and the resulting massacre will trigger a war. The Shin Bet assessment adds that Hamas is additionally motivated by the urge to get back at Egyptian President Abdel Fatteh El-Sisi for imposing a tight economic and land blockade on the Gaza Strip, as well as showing muscle against the Palestinian Authority, which has stopped funding electricity supplies.
Defense Minister Avigdor Lieberman lined up behind the chief of staff and the Shin Bet, partly hoping that his belligerent rhetoric would save his Israel Beitenu party from a beating at the polls.
The opposite evaluation is offered by IDF Military Intelligence (AMAN), based on facts and figures gathered in secret surveys conducted inside the Gaza Strip. The broad assessment of an ongoing economic crisis is questioned in the survey’s conclusions, because shop shelves and markets were found to be packed with an assortment of foods and consumer goods. If things are so bad, how come the Gazans have started construction on three new shopping malls, and 400 trucks loaded with products and medicines pass through from Israel to Gaza day by day, the military intelligence researchers ask. Electricity and water are indeed in short supply, because the Palestinian Authority refuses to foot the bills, but these shortages have prevailed in the enclave for decades, even under the Egyptian occupation before 1967. As for the galloping unemployment rate, it is not much higher than the average in most other parts of the Middle East.
The AMAN paper therefore sees no cause to determine that that economic distress in Gaza will inevitably lead to a military confrontation.

The Likud Minister of Transport and Intelligence goes along with the Defense Minister and Shin Bet alarmism. Having indicated he is throwing his hat in the ring as successor to Prime Minister Binyamin Netanyahu, he is urging swift action to alleviate Gaza’s economic distress. Yair Lapid, head of the opposition Future Party, fervently agrees that Israel must extend a helping hand because “We have no quarrel with the people of Gaza, only Hamas.” This view dominates local mainstream media, all of which maintain reporters close to these politicians.

A side show was meanwhile staged at the Palestinian donors’ conference in Brussels. On Jan. 31, an Israeli humanitarian assistance and rehabilitation program for the Gaza Strip was presented by Tzachi Hanegbi, Likud Minister for Regional Cooperation and Maj. Gen. Yoav Mordecai, whose term as Coordinator of Government Operations in the Territories is drawing to a close. The programs, aimed at averting a catastrophe, would cost an estimated billion dollars, which “the international community” was asked to finance.
Their timing was off, DEBKAfile’s sources report. Most of the donating governments have given up on the Palestinian cause and back off from raising assistance funding –  even the last pro-Palestinian holdouts, Turkey and Qatar are cagey about shelling out cash.

This week, a group of high-ranking IDF officers stepped up. Fearing the controversy and the contesting freelance initiatives would propel the Gaza situation willy-nilly into a real war crisis, they turned to the defense minister with an appeal to back off from his dire predictions of war. The change of tone was apparent in a television interview the defense minister gave on Feb. 2. “There is no humanitarian crisis in Gaza,” he said, and “an imminent explosion” is not to be expected.  An answering echo came from Gaza, where an anonymous Palestinian official went on record as saying: “A Gaza war is not impending.”

It would be interesting to hear why the chief of staff preferred to heed the Shin Bet on the Gaza crisis, rather than his own military intelligence branch.