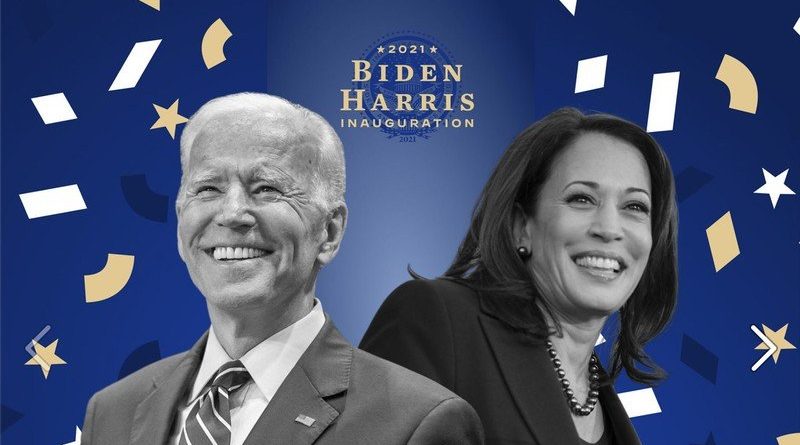 Unity was the leitmotif of Joe Biden’s first speech as the 46th US president at his inauguration on Jan. 20 along with Kamala Harris as the first ever US Vice President. In countless other ways, that ceremony differed from the regular ceremonies taking place in America every four years. Attendance was rigidly scaled down by health compulsions arising from the covid pandemic and well-spaced accordingly. Masks were universally worn. Security concerns cleared the Mall of the usual cheering crowds, replacing them with a sea of American flags.

Harris, who is of Indian-Jamaican descent, was sworn in before Biden. She became the first Asian-American vice president. She also ran against Biden for the Democratic presidency. Outgoing president Donald Trump broke with tradition by absenting himself from the inauguration. When it took place, he had arrived at his new official residence at Mar a Lago in Florida. His VP Mike Pence was there, along with three former presidents and their wives, George and Laura Bush, Bill and Hillary Clinton and Barack and Michele Obama. The few other dignitaries included members of the US Supreme Court.

Eugene Goodman, the Capitol police officer who was hailed as a hero for trying to block the Senate chambers against a swarm of pro-Trump protesters, during the 6 January riot, escorted Harris at the inauguration.

That event threaded strongly through the new president’s first speech, although Donald Trump was never mentioned by name. After thanking his predecessors “from both parties,” Biden declared, “We have much to do,” and noted that American deaths from the covid virus outnumbered its WWII losses. He vowed to fight and defeat “extremism, white supremacy, lawlessness and violence and lies.” and stressed: “disagreement must not lead to disunity.” While vowing to fight the virus “as one nation,” Biden sent a message outside US borders, “America will be tested and come out stronger, we will re-engage with the world and repair our alliances.”

The new White House spokesmen reported earlier that the president had prepared a package of executive actions for his first days in office, most focusing on the battle against the covid pandemic and some designed to reverse decisions made by Donald Trump, including the ban on immigration from Moslem majority countries, and rejoining international pacts such as the ones of climate control.

Trump, in his last words before leaving Washington D.C, wished the new administration “great success,” without naming the incoming president. In his parting shot he said: “… hopefully it’s not a long-term goodbye. We’ll see each other again.”