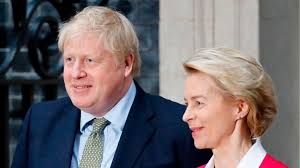 Four years after voting to leave the 27-nation European Union, Britain clinched a Brexit trade deal with the European Union on Dec. 24. Next Thursday, the UK is set to exit EU trading rules, a year after officially leave the bloc, thereby marking a historic global shift. At stake is around $900 billion in annual trade – half in goods, the rest in services, the lion’s share of Britain’s economy.

At a Downing Street press conference, British PM Boris Johnson announced: “We have taken back control of our laws and our destiny.” The text of the agreement has yet to be released, but the PM claimed it was a “good deal for the whole of Europe.”

The statement issued by his government said: “The deal … guarantees that we are no longer in the lunar pull of the EU, we are not bound by EU rules, there is no role for the European Court of Justice and all of our key red lines about returning sovereignty have been achieved. It means that we will have full political and economic independence on 1st January 2021.”

Britain’s exit from the European union, mandated by a narrow majority of 52 to 48, in a nation referendum on June 23, 2016, proclaimed UK independence while also trashing the political careers of two of Johnson’s Conservative predecessors along the tortuous journey to a deal: David Cameron stepped down after losing his campaign to halt Brexit; Theresa May lost three parliament votes against the exit plan she negotiated with Brussels before giving up and leaving. Meanwhile, the British economy sank into suspended chaos and limped from crisis to crisis.

In this sense, the deal is a huge relief. It will also appeal to the insular tendencies of the British public, which entered the partnership clinging to the pound in preference to the euro and mourning the loss of two shillings to the pound when the currency was decimalized.

The UK was adamant throughout the negotiations that it be treated as a sovereign equal of the EU and have its independence respected. At his press conference, Johnson said the £668bn a year agreement would “protect jobs across this country” and “enable UK goods to be sold without tariffs, without quotas in the EU market”.

But clearly sovereign independence does not come cheap. The formation of two separate markets by the EU and the UK will mean big changes for business as well as the loss of other perks taken for granted, such as the free movement of people across borders. Goods truckers face customs and regulatory checks and new forms to fill out. Logjams will build up at the port of Dover for Channel crossings after Jan. 1 until the paperwork is sorted.

The future is also uncertain for Britain’s key export industry, of financial services Outside the single market, the City of London relies on the EU to grant permission for servicing EU-based clients and sell them banking, accounting, and associated legal products. This “equivalence arrangement” is reviewed on an ongoing basis, depending on the UK’s approach to financial regulation and data protection. That puts the sector on a much less firm footing than manufacturing.

Johnson admitted he had had to give ground on fishing rights, one of the last sticking points on the way to a deal.
He disclosed, furthermore, “The EU began with I think wanting a transition period of 14 years, we wanted three years, we’ve ended up at five years,” he said.

At a press conference in Brussels, European Commission President, Ursula von der Leyen, said: “This was a long and winding road, but we have got a good deal to show for it. “It is fair, it is a balanced deal, and it is the right and responsible thing to do for both sides.” Now, she said, “it was time to turn the page and look to the future” and that the UK “remains a trusted partner.”

The UK Parliament will be recalled on 30 December to vote on the accord. – it will also need to be ratified by the European Parliament. Opposition Labor is expected to back the deal, Wales said a deal was better than no deal, but Scotland’s First Minister Nicola Sturgeon is fighting it. “Brexit is happening against Scotland’s will – and there is no deal that will ever make up for what Brexit takes away from us,” she said. “It’s time to chart our own future as an independent, European nation.” Ireland Taoiseach (Irish prime minister) Micheál Martin was more positive: “From what we have heard today, I believe that it represents a good compromise and a balanced outcome.”

Representing the predicted adverse responses to Johnson’s coup, The Guardian editorialized: The prime minister deserves no credit for avoiding a calamity that loomed so close because he had chosen to drive eagerly towards it.”