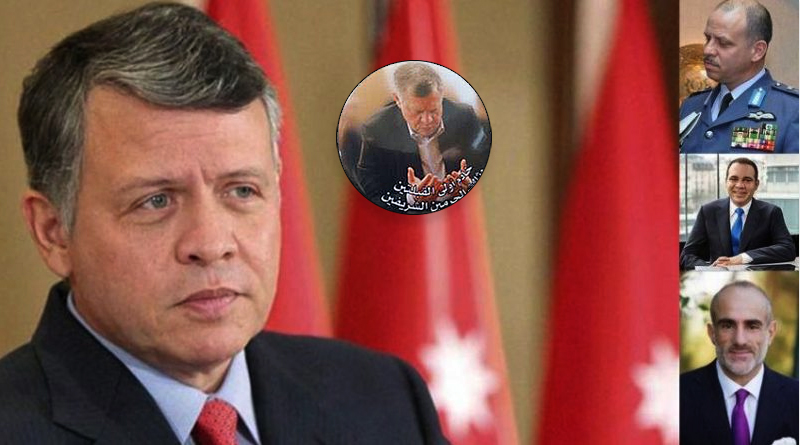 King Abdullah of Jordan Sunday Dec. 31 proclaimed himself the Servant of the First Qibla and Third Holy Mosque, throwing a religious gauntlet down for Saudi rulers.
DEBKAfile’s sources report that the king was challenging Saudi King Salman and Crown Prince Muhammad for abandoning Jerusalem, site of the Third Mosque, in the face of President Trump’s recognition of the Holy City as Israel’s capital.  Abdullah emphasized this point by distributing a large lapel pin highlighting his role, which every Jordanian government official, lawmaker and military officer was seen sporting on Sunday.
The First Qibla marks the direction to which Muslims turn in prayer, whereas the Third Holy Mosque is Al Aqsa on Temple Mount. The Saudi royal house is the Custodian of the Two Holy Mosques of Mecca. A serious rift has developed between the two Arab royal houses in Amman and Riyadh. Abdullah has lined up against Trump’s Jerusalem policy, while Saudi Prince Muhammed bin Salman and his ally, the Emirate ruler put him on notice to stop slamming that policy and suspend his ties with Saudi foes, Turkey and Qatar.

Jordan’s king gave his answer Sunday, by provocatively placing his religious role on a par with that of the Saudi royals. This escalating contest has the potential for blowing up into a wide confrontation with repercussions on the region, Israel and Jerusalem.
King Abdullah led up to this action 24 hours earlier by placing under house arrest three senior Jordanian princes who were accused of maintaining secret ties with the crown princes of Saudi Arabia and the UAE. DEBKA file revealed this development on Saturday. See the first story below.

According to Arab sources, the Jordanian King Abdullah has placed under arrest two of his brothers and a cousin, accusing them of secret ties with the Saudi and UAE crown princes.

Jordanian intelligence reportedly alerted him to communications Princes Faisal bin Hussein, Ali bin Hussein and their cousin, Prince Talal bin Muhammed were maintaining with Saudi Prince Muhammed bin Salman (MbS) and the Emirati’s Prince Muhammed bin Zayed (MbZ), with whom King Abdullah is at loggerheads. A statement released by the Jordanian military said that the three princes took early retirement as part of military changes underway in the Jordanian Army, but made no reference to their detention. At the same time. none of them have been seen since their reported house arrest.

King Abdullah raised the ire of the Saudi and UAE leaders by cultivating close ties with Turkey and Qatar, strong opponents to Riyadh and Abu Dhabi. On Dec. 16, DEBKAfile reported that the rift had peaked with the arrest of the Jordanian-Palestinian billionaire financier Sabih al-Masri while he was on a regular trip to Riyadh. To obtain his release, MbS and Mbz demanded that the Jordanian king break away from the Islamic bloc that the Turkish ruler and Qatar sought to establish to contest President Trump’s Jerusalem policy.

The three detained princes are senior members of the Hashemite Royal House of Jordan: Prince Faisal bin Hussein (55) is the son of King Hussein and Queen Muna and therefore Abdullah’s younger full brother. He has occasionally served as regent during the king’s absences abroad. Prince Ali 42) is the second son of Hussein and Queen Alia (who died in a helicopter accident) and is therefore the king’s half-brother. Prince Talal bin Muhammad (53), grandson of King Talal is a first cousin of King Abdullah.