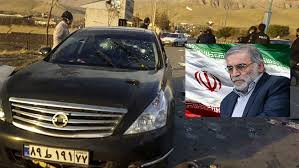 The emergency security meeting was undoubtedly taxed with making good on the threats to punish the purported culprit, named as the “Zionist regime.” It was no less urgent to identify and lay hands on the killers and plug the gaping holes exposed in the country’s security, through which a large team of assassins was able to kill Iran’s closely-guarded nuclear program supremo in a surprise ambush on a highway near Tehran.

At least two vehicles were involved in the attack. According to the semi-official news agency Tasnim, “terrorists blew up another car” before firing on a vehicle carrying Fakhrizadeh and his bodyguards. He was traveling in an armored car which, most sources agree, was evidently blown up by a truck bomb before – or after – the gunmen jumped out and fired automatic weapons in a shootout with his bodyguards. Casualties are likely. The killers appear to have readied a separate vehicle for their getaway.

Israel, the White House, Pentagon, US State Department and CIA have all declined to comment on the episode, as have Biden’s transition team. However, if it was indeed the work of the Mossad, a scenario which may never be confirmed or proven, it would indicate the presence of an extensive clandestine network of agents planted in the Islamic Republic which may be surmised to have enlisted local anti-regime elements for the operation.

Eight years ago, a director of Iran’s main uranium enrichment site at Natanz was killed in a blast from a magnetic bomb placed on his car. He was at least the fifth Iran’s nuclear scientist killed in apparent targeted attacks in two years, which Israel never acknowledged. Then, too, in February, 2012, the Islamic regime held Israel responsible and sought to wreak vengeance. It did so by activating its foreign network of terrorist cells to try and assassinate Israeli diplomats in Bangkok, Delhi and Tbilisi.

That network was developed by Qassem Soleimani, the al Qods chief, whom the Americans killed in Baghdad in 2018. Fakhrizadeh shared with him the rank of brigadier general of Iran’s Revolutionary Guards Corps.

The blast in New Delhi that month set a car ablaze and injured four people, including an Israeli Embassy driver and a diplomat’s wife. The device in Georgia was discovered and safely defused. In both incidents, “sticky bombs” were attached to cars by magnets.

The attempted bombing in Bangkok eight years ago was another flop, but it had consequences that brought the attacks and counter-attacks full circle to the present day. Indeed, two days ago, Thailand handed over to Tehran three Iranians as part of a prisoner swap for the release of the British-Australian scholar Kylie Moore-Gilbert, who was charged with espionage and sentenced to 10 years in prison.

Tehran refrained from naming the three released men. It turns out, however, that they were none other than the men convicted in Thailand of targeting Israeli diplomats in a 2012 bomb plot, as part of the revenge offensive for the deaths of Iranian nuclear scientists. That plot also misfired when their bomb blew up accidentally and the conspirators were caught and sentenced to jail on various charges – though not terrorism.

It so happens, that on Thursday, the day before Fakhrizadeh’s death, those failed bombers were given a heroes’ welcome on their arrival in Tehran.

While Israel is on high alert in case Iran follows through on its threats of retaliation for the top nuclear scientist’s death, it is obvious to both that an extreme response would trigger a full-scale war, which would not serve either of their interests during the transition to a new presidency in the White House – especially when Iran is hoping to be granted an opening to diplomacy by the Biden presidency.

Notwithstanding the Islamic regime’s losses, US sanctions and the wars waged against its proxies, its rulers persevere in their march toward a nuclear bomb and dominance in the region. This persistence too is a form of retaliation.