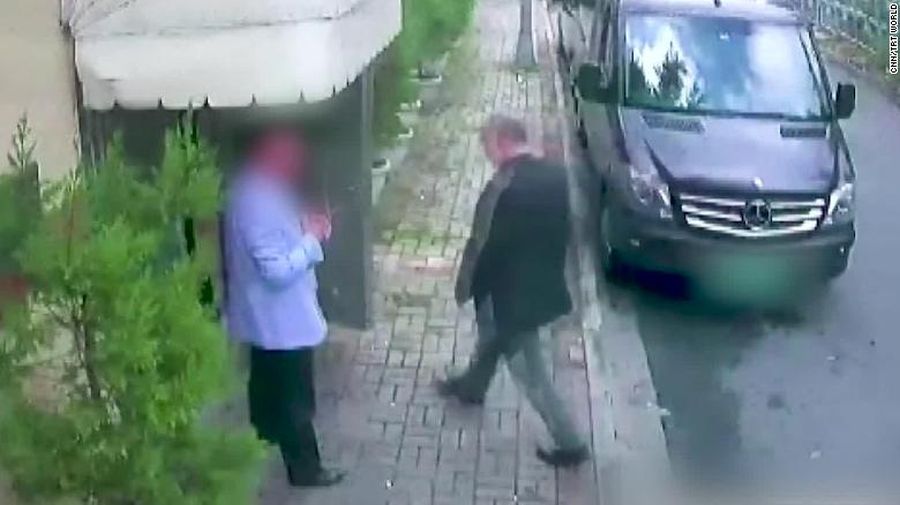 It could be any or all these, since no one still knows what befell the prominent Saudi journalist Jamal Khashoggi after he disappeared inside the Saudi consulate in Istanbul on Oct. 2.  But the fallout is spreading worldwide, as theories, the wilder the better, flourish around the mystery. Turkey, whose animosity for the Saudi kingdom is a fact of Muslim politics, leads the pack, Turkish intelligence officials claimed this week to have a video clip showing Saudi agents murdering Khashoggi in the consulate building. They also claimed proof that 15 Saudi agents were involved in dismembering the body and flying its parts to Saudi Arabia after removing the remains in a black van with consular number plates. While grabbing global headlines – especially in US media – Turkey has never shown this clip or any other proof to support its claims. They are steadfastly denied as baseless by Riyadh, which has initiated a joint investigation of the disappearance with Turkey.

President Donald Trump’s national security adviser John Bolton only deepened the mystery when he said on Thursday, Oct. 11, “We need to find out what the facts are, and we need to get this resolved quickly, because if it is another operation, people need to understand that,” He went on to say: “I think the Saudis themselves are being damaged, because we don’t have the facts out.”
What other operation? And by whom?

DEBKAfile’s Saudi experts note that disappearing dissenters to the throne, some of them royals, are not a novelty in Saudi Arabia, Under previous Saudi reigns, even princes were mysteriously snatched from their cushy residences in foreign countries, and never heard of again.
Take the case of Prince Sultan bin Turki, who was abducted in Geneva in 2003 after calling for reforms in the kingdom. Testimony subsequently presented to a Swiss court alleged that he was lured to a rendezvous outside Geneva and drugged when he resisted attempts to put him on a plane for the kingdom. Then, in 2015, another prince, Turki bin Bandar al Saud, a former police chief, was believed to have suffered the same fate in Paris. He left the kingdom over a family inheritance dispute which landed him in prison. After his release, he moved to Paris and from there posted videos in an online campaign for reforms from 2012 until his disappearance and apparent abduction. His whereabouts are still unknown.
Only last year, in November, Lebanese Prime Minister Rafiq Hariri vanished after he was invited to Riyadh by the incumbent crown prince Muhammed bin Salman (MbS). He was only “discovered” and freed after intercession by French President Emmanuel Macron and agreeing to transfer his entire fortune, $7 billion, to the Saudi treasury.  No one knows how many princes and tycoons, arrested on the orders of Prince Muhammed on Nov. 4, 2017 and imprisoned at the Riyadh Ritz-Carlton, are still in custody. Most bought their release by surrendering their assets to the Saudi crown.

Gulf sources maintain that Jamal Khashoggi was never the loudest critic of the House of Saudi he is widely portrayed as being. In some articles in Western publications, he combined mild criticism with occasional praise for the economic and social reforms introduced by the young crown prince. Therefore, the sensational reporting about Saudi intelligence assassins executing Khashoggi on the orders of MbS should be treated with caution, if not a grain of salt. Such reports may in fact precipitate his murder, if he is still alive. He may even have been the victim of a conspiracy by the crown prince’s rivals inside the royal house to show him in a bad light and torpedo his policies.

Turkish President Tayyip Erdogan loathes the Saudi royal family, and the crown prince in particular, and would not be above capitalizing on a putative Saudi operation against Khashoggi for blackening their name. Who knows what bargaining may be afoot – and between whom – before he makes a surprise appearance?  It may be too soon therefore to decide whether the missing journalist is alive or dead.

It is also possible that certain US and Western undercover agencies, dedicated to the downfall of President Donald Trump, jumped on the Turkish bandwagon to undermine the Saudi crown prince and so stigmatize the Trump administration’s alliance with the Saudi royal house – and Jared Kushner’s friendship with MbS in particular.
Maybe, too, Nikki Haley picked up word of the mud flying in that direction and stepped in on Oct. 9, with kind words for the president’s son-in-law apropos of nothing as an unsung “genius” during her parting comments as ambassador to the UN at the Oval Office.
The White House is clearly troubled by the swirling rumors and sent Bolton, Secretary of State Mike Pompeo and Kushner to demand information from the crown prince. President Trump stated Thursday that US Investigators in Turkey will probe the case of the missing Saudi journalist. “I have to find out what happened,” he said, “We’re being very tough. And we have investigators over there and we’re working with Turkey, and frankly, we’re working with Saudi Arabia. We want to find out what happened. It is a bad situation,” said Trump.
Clearly, it is vital to determine if the affair, which threatens serious damage to US-Saudi relations, was deliberately engineered or opportunistically exploited for that purpose.  In jeopardy too is Trump’s “peace plan of the century” for resolving the Israeli-Palestinian dispute and normalizing relations between the Arab world and the Jewish State, in which the Saudis are a key player and with whom Prime Minister Binyamin Netanyahu has cultivated friendly ties. All these questions await answers in the next chapter of the Khashoggi mystery.