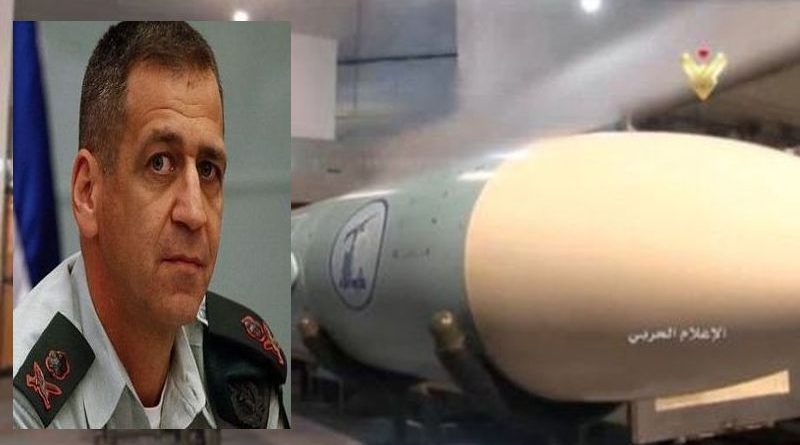 In a wide-ranging lecture on Wednesday, Dec. 25, IDF Chief of Staff Lt. Gen. Aviv Kochavi said: “Although a direct conflict with Iran is unlikely, we are prepared without encouraging it.” Calling Iran Israel’s immediate enemy, the general said, “We must continue our efforts to remove Iranian weaponry from Syria, although we would have preferred not to conduct this effort on our own.”

Speaking at an event in Tel Aviv, Kochavi commented that when technology is readily available to extremists and bitter enemies, they don’t need the support of a large military industry or a superpower for jamming GPS systems or cyberwarfare. Missiles are easily adapted to precision guidance and “we [Israel and the IDF] are engaged in a huge effort to prevent our enemies from acquiring this capability, even if at times, we reach the brink of direct conflict.”

Iran continues to manufacture precise missiles that can reach Israel in their hundreds. The IDF chief advised the country to prepare “mentally” for a much greater assault on civilian areas than faced in the past. In a message to the population, Kochavi said: “Israel is a phenomenal success and the armed forces’ primary mission is to assure the country of security and defense,” in their broadest sense, namely, “a high measure of safety, stability and the absence of wars.” He cited “our ultimate goal” as being “to instill in our enemies the feeling of despair and self-doubt in their ability to achieve their aggressive aims.”

The military chief stressed: “Weapons are flowing freely from Iraq and we can’t let this happen unopposed,” he said. “All the hostile fronts ranged against us have become active in recent months – each escalating at least twice to war alert levels. Al Qods and Hizballah forces operate in Syria and Iran has shot its tentacles into the Gaza Strip. In these circumstances secret Israeli ongoing operations aimed at preventing Shiite militia entrenchment in Syria and the threat from precise missiles are of paramount importance and will persist.”

Referring to the years’ long Palestinian terrorist threat from Gaza, Kochavi stressed that every effort will be made to imbue in the targeted Israeli population a sense of security – but, he said, that sense must depend on achieving real security. “Hamas is finally focusing on caring for the enclave’s population and is anxious to avoid escalating tension, said the military chief. “The last rash of rocket attacks were the work of the Palestinian Islamic Jihad, whose leader Baha Abu al-Ata is now dead. [He was killed on Nov. 12 in an IDF targeted assassination.] Since Hamas has regained control of the Gaza Strip, backed by Egypt, Israel can afford to lift some of the restrictions imposed [on a territory dedicated to terrorism], while placing the security of Israelis along the border at the top of its scale of priorities. “This is government policy and I support it fully. I believe it can bring calm to the area” Kochavi said.

68 thoughts on “Kochavi: Direct conflict with Iran is improbable. Still, he warned of increased fire power against civilian areas”