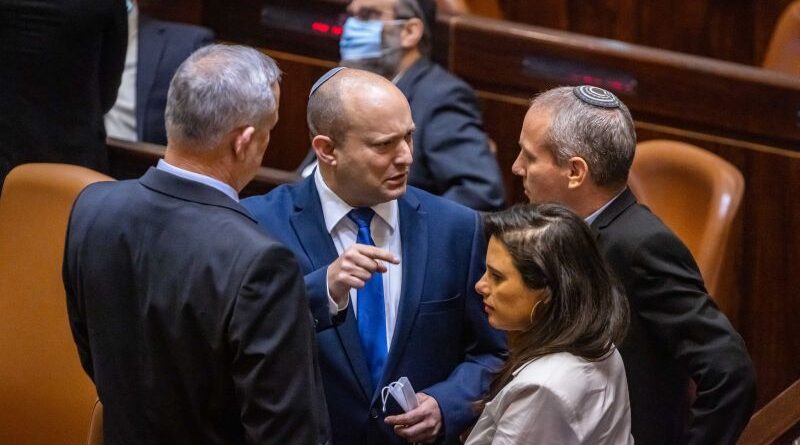 After presenting his “government for change” to the president on Wednesday night, based on eight parties with a majority total of 61 lawmakers, Yair Lapid discovered early Thursday, June 2, that his majority had not survived the night. Yamina MK Nir Aurbach had pulled his support from the new Knesset Speaker from Lapid’s Party who was to have replaced Likud’s Yariv Levin. Lapid had counted on his man, MK Micky Levi, pushing forward the new government’s Knesset presentation and swearing-in. His overriding goal of ending Binyamin Netanyahu’s long rule would then have been accomplished within days. But Aurbach refused to budge in his objection to the new government, even after Yamina leader Naftali Bennett, who is due to head the new government in its first two years, took him to task. Bennett later invited wavering party members to his home to tighten up the ranks.

This eight-cornered government was widely predicted to be volatile, but not to slip quite so quickly – so to speak, between cup and lip.

The coalition deal threatens to fray at two other seams: Far-left Meretz’s demand for benefits for the gay community is opposed by the Arab Raam party leader Mansour Abbas, destined to be the first Arab lawmaker to be integrated in an Israeli government coalition. And MK Ze‘ev Elkin of New Hope won’t hear of the United Arab List eking out the government’s majority in the event of more dropouts..

After a hair-raising dash to obtain the signatures of all eight parties for a coalition, Yair Lapid was ready to meet the deadline of his mandate to form a government at midnight on Wednesday June 2 and present the lineup to the president.

In the final hours, after intense haggling, three major hurdles were set aside for now, so as to add the last three missing signatures to the lineup. Yemina signed onto the deal after Ayelet Shaked was awarded first place on the Judicial Selection Committee in a rotation deal with Labor Leader Merav Michaeli, who takes over at the same time as Lapid becomes premier.  Michaeli held out until the last hour. Labor is to be compensated with a deputy ministerial post.

The Arab Ra’am list signed on the deal after its leader Mansour Abbas was satisfied with substantial gains for his community; while New Hope’s Gideon Saar added his signature against an assurance that the attorney general’s functions would be overhauled.

Some of these obstacles remain to be finally sorted out during the week remaining up to the swearing-in of the new party before the Knesset. Others may crop up before the government is finally in the bag. Yamina leader Naftali Bennett needs, in particular, to tackle dissidents in his party to make up the 61 majority, before he can take his seat as first prime minister of the new “government of change.”