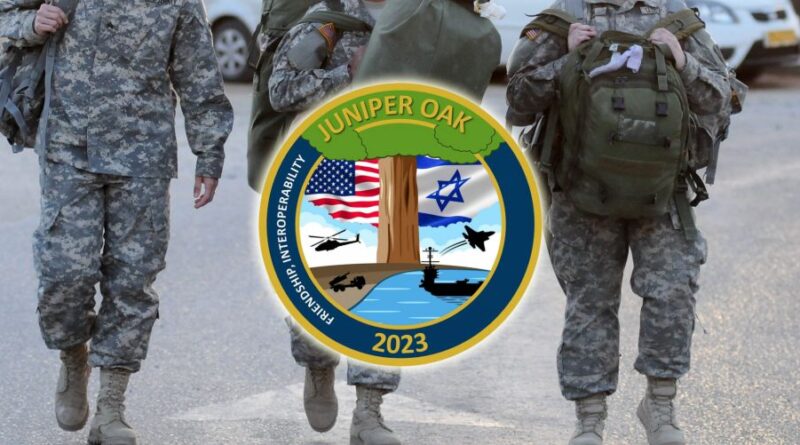 Juniper Oak 23, which kicked off on Monday, Jan 23, is the largest joint exercise the US has ever conducted with Israel, involving hundreds of aircraft, thousands of troops, and a dozen ships. The IDF interacts for the first time with a US carrier, the George H.W. Bush strike group. A senior US official described the drill conducted through Friday in Israel and the Mediterranean as “the most significant exercise to date.”

US Central Command and the Israeli military have invested nearly 6,500 US personnel as well as more than 1,100 Israeli personnel, along with 142 aircraft. The 100 American warplanes flying alongside 42 Israeli aicraft include 4 F-35 stealth bombers and 4 heavy nuclear-capable B-32s, at least 4 F-18 fighters, as well as two long-range MQ-9 Reaper drones and refueling aircraft. The live-fire drill will be served by 81,500 tons of ordnance, as well as heavy US Army HIMAR artillery, rocket launchers, laser-guided bombs and stealth cruise missiles, which will cover all the domains of warfare to include space and electronic warfare. The USS George H. W. Bush carrier strike group will significantly take part in the exercise,

“We can’t really find another (exercise) that even kind of comes close,” said a senior US defense official. The “Juniper Oak” drills, which run through Friday, are meant to demonstrate and deepen integration between the US and Israeli militaries,” “the US defense official said, and they come at a time of growing tension over Iran’s nuclear program.

In its statement, Israel’s army said Juniper Oak is meant to “test US-Israeli readiness and improve the interoperability of both forces, as well as target strikes and training in complex terrain while integrating joint communications and command and control systems.” In the words of Gen. Michael Erik Kurilla, commander of the exercise, “Juniper Oak is a Combined Joint All-Domain which improves our interoperability on land, in the air, at sea, in space and in cyberspace with our partners, enhances our ability to respond to contingencies and underscores out commitment to the Middle East.”

Rocket boats and submarines will simulate joint missions together with the Bush carrier strike group; also practicing the refueling of Israeli Saar 5 missile ships by an American refueling craft as a means of extending the Israeli army’s targeting range in general and for contingencies. For the same purpose, the IDF’s first refueling plane “Ram” and heavy American KC46s will together conduct mid-air refueling operations for bombers and fighter aircraft.

To test their responses to threats from the sea, the US and Israeli air forces will rehearse various scenarios with large packs of fighters, transport planes, rescue helicopters and spy planes, while American bombers will drop live ordnance over a southern Israel wasteland.

While Iran was not cited in any of the official statements on the exercise, a Pentagon official noted: “I do think that the scale of the exercise is relevant to a whole range of scenarios, and Iran may draw certain inferences from that.” “It’s really meant mostly to kick the tires on our ability to do things at this scale with the Israelis against a whole range of different threats.”

One hoped-for conclusion, say US sources, is that Tehran will be convinced that Washington’s supportive involvement in the Ukraine war and concerns over China’s threatening actions have in no way diminished American strength, mobility and resolve to act in alliance with Israel to disarm Iran’s nuclear weapons program.