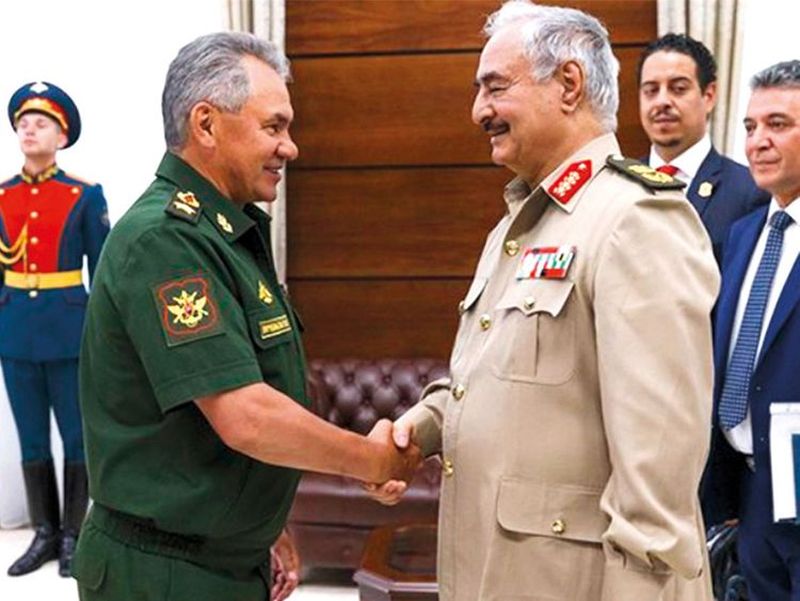 On Sunday, Aug. 18, Gen. Khalifa Haftar’s Libyan National Army (LNA) destroyed a Turkish base under construction near the air force academy of Misrata, 200km east of Tripoli. He then vowed to “defeat any plot to build foreign bases that support and finance terrorism in Libya.”

DEBKA Weekly’s military sources report that the Libyan general adopted Israel’s tactics of air and ground-to-ground missiles for hitting Iranian targets in Syria and latterly Iraq. Given his close ties with Moscow, it may be assumed that the Russian army and intelligence officers attached to his army coached Haftar’s forces in Israel’s methods of operation against Iran.

This event revealed that a second Russian-Turkish hostile front had opened up in the Middle East in Libya as well as Syria. On Tuesday, Aug. 20, Turkish F-16 fighters flying over the Idlib battlefield were challenged by Russian Su-35 fighter-bombers that were scrambled from their Khmeimim air base in Latakia. Only after the Turkish air crews were cautioned that their planes would be shot down, did they turn tail and leave Syrian air space. The Russians were prepared to make good on their threat, having made their S-300 and S-400 air defense batteries ready for operation.

At Haftar’s headquarters in Benghazi, meanwhile, LNA spokesman Ahmed al-Mismari told reporters that the Turks had almost converted the Misrata air force academy into a military base when they were attacked. He unrolled a map to show them before-and-after images of hangars being built to house a fleet of Turkish drones in Libya and warned that “anyone interfering in Libyan affairs in such flagrant ways would meet the same fate as the Turks. ”

The Russian defense ministry regards Haftar’s LNA as a proto-army and potential backbone of governance in eastern Libya. This willingness to help him is shared by Egypt and the United Arab Emirates, who laud his successes in countering terrorism and Islamic radical groups.

Earlier this year, Gen. Haftar found backing for an operation to take over the oil-rich Fezzan region of southern Libya, largely through funding provided by Moscow with the assent of Cairo and Abu Dhabi. It came in the form of counterfeit Libyan banknotes printed by Russian intelligence.

Our sources report that the fake bills are still floating around, most of them in Sudan where Russian agents helped Haftar recruit thousands of Sudanese fighters for the LNA. The recruits were moved to training camps on the Libyan side of the border and after a brief training course were attached to Haftar’s army.

France has joined Russia, Egypt and the UAE in backing this army, whereas the National Government in Tripoli which is recognized by the UN is supported by Italy, Qatar and Turkey. The Libyan National Army has so far shown weakness in its failure, despite extensive international support, to capture Tripoli, the capital, in five months of a dragging offensive.