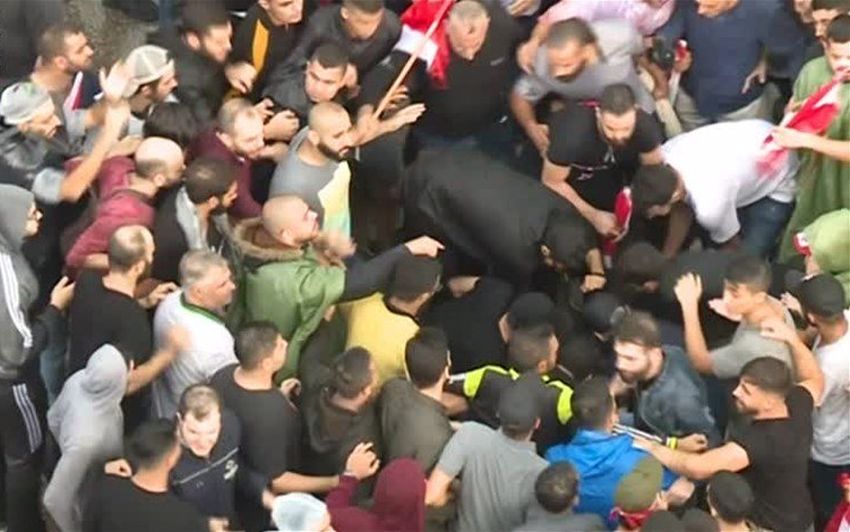 The mass anti-government protests engulfing Lebanon and Iraq are strongly infused with resentment of Iran’s influence and Hizballah dominance. Yet both held back on bloody crackdowns.

On Friday, Oct. 25, the ninth day of popular protests in Lebanon, Hizballah leader Hassan Nasrallah warned in a televised speech that they were putting the country at risk of “chaos, economic collapse and civil war.” This was an attempt post factum to justify his first furtive steps to confront the protesters with force. A special new squad of Hizballah officers and fighters, clad in civvies and armed with clubs, were already scuffling with demonstrators on Beirut’s central Riad al-Solh Square that night. Those heavies may be expected to turn up in the thick of rallies in other parts of Lebanon. To motivate his followers, Nasrallah went on to charge that foreign embassies in Beirut had hijacked the protest movement and the CIA was involved.
The protesters were not impressed: “The government must resign, and everything will be OK. All of them means all of them,” they insisted. They were telling Iran’s foremost proxy, Hizballah, as a powerful political player in Lebanon with a cabinet majority, that its head was also on the block.

DEBKAfile’s sources note that the road from clubs to live ammunition is short. Nasrallah is only waiting for the first shot to be fired by a demonstrator before letting his followers loose with live shots for dispersing the demonstrations.

He is following a preset plan of action which has three points:

The resurgence of demonstrations in Iraq on Friday plunged into greater violence that they did in Lebanon, although both are increasingly endangering the main bastions of influence Tehran and its agents have created in Middle East. Those key political and military power centers are shaking and threatening to crumble. This is partly due to the tardy awareness of Tehran and Nasrallah to the force of the street protests sweeping through Beirut and Baghdad. They only woke up when they had spun out of control.

On that same Friday, they were confronted by Iraq’s top religious authority, Grand Ayatollah Ali Al-Sistani, aiming an ultimatum to Baghdad to enact economic reforms and start rooting out corruption, in obedience to the protesters demands. He spoke to the accompaniment of a fresh outbreak of exceptionally violent popular protests in Baghdad and the Shiite towns of the south.

In Baghdad, Basra and Nasiriya and other Shiite towns, hundreds of thousands of marching protesters shouted anti-Iran slogans and burned effigies of Iran’s supreme leader Ayatollah Ali Khamenei. As well as attacking government institutions, for the first time the crowds torched the headquarters of pro-Iranian Iraqi factions and militias. In some places, those militias opened fire on the crowds. Iraq’s Bloody Friday ended with more than 40 dead and some 2,300 injured – and no end in sight.