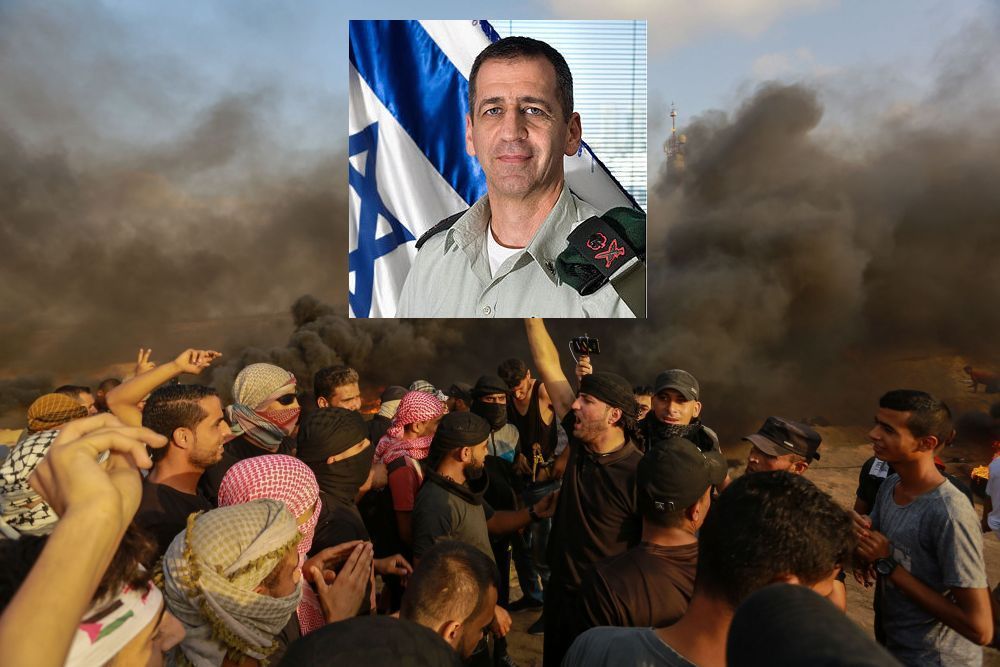 Wave upon wave of Palestinian missiles were aimed at Israeli communities from Gaza on Friday night and Saturday morning, Oct. 26-27, gaining impetus from IDF air strikes at some 87 Hamas targets. The IDF spokesman spoke of 30 Palestinian missiles during the night, although the number was more than 50, of which Iron Dome intercepted 13 that directly threatened residential areas. This Palestinian assault focused on the town of Sderot and the Shear Hanegev Council communities rather than widely-spaced targets.
The IDF reported Saturday that IAF fighters hit the new Hamas General Security headquarters in the Derej district of Gaza City although they admitted the building was empty at the time of the attack. In the streets of Sderot meanwhile householders and their children huddled in shelters and fortified rooms after a day of listening to howling mobs of some 16,000 Palestinians close by, trying to force their way through the Gaza fence at three points, while hurling small bombs, grenades and rocks at the soldiers. Five rioters were killed and dozens injured by IDF gunfire before they were pushed back.

It also served as a greeting card from Hamas and Islamic Jihad to Israel’s next military chief of staff, whom Defense Minister Avigdor Lieberman named on Friday as  Maj. Gen. Aviv Kochavi, 54. Kochavi is currently deputy chief of staff to Lt. Gen. Gady Eisenkot, after spending three years as OC Northern Command. He served in many key combat and staff capacities during his military career, although evaluations of his capabilities are mixed.

As commander of the Paratroop Brigade (in 2001), he led successful operations against terrorist concentrations (in 2002-2003) in major Palestinian towns for breaking the back of the Second Intifada (Palestinian uprising) that terrorized Israeli civilian centers for two years. Kochavi designed an effective counter-terror raid technique for saving Israeli troops raiding houses for suspects from being exposed to attack in the street. They were given a tool, which was named after him, for smashing through interior walls between rooms.

As head of AMAN (Military Intelligence), while faulted for certain missed strategic evaluations, he had the foresight to develop the unit’s technological capabilities for its leap into cyber warfare.
Kochavi is still remembered as commander of the Gaza Division 13 years ago, when Israel withdrew finally from the Palestinian enclave under the late Prime Minister Ariel Sharon. On Sept. 12, 2005, Kochavi shut the door on the last evacuated Israeli community in the Gaza Strip with the pledge: “If a single shot, or bullet is ever fired from here against Israel, the IDF’s response will be crushing!”

During the subsequent 13 years, that vow stayed in the history books. Only this week, Prime Minister Binyamin Netanyahu noted that, whereas in 2005, Hamas had only 3,000 armed men, the number has since soared to 65,000!  However, in 2009, a year after he assumed the premiership, the Hamas militia numbered no more than 12,000 men.

Policy-making and military thinking in Israel for dealing with unending Hamas terror has remained frozen in place for 13 years. In 2005, Egypt promised to deploy troops on the strategic “Philadelphi Corridor” to prevent the newly-independent and demilitarized Palestinian enclave in Gaza from smuggling in weapons for rearming. That undertaking was not honored, any more than today, Cairo is capable of forcing Hamas to accept a truce.

As for the incoming chief of staff, Kochavi’s critics evaluate his performance as OC Northern command in charge of the Syrian and Lebanese border areas as falling short of his earlier operational and innovative promise. The question now is: Will Kochavi rise above Israel’s long conceptual paralysis with regard to Gaza and resort to action for stopping the increasingly unbridled Palestinian violence? This weekend, the terrorists of Gaza threw down another gauntlet for the IDF, clearly a challenge for Gen. Kochavi to see if he will finally make good on his 13-year oath of a “crushing response”