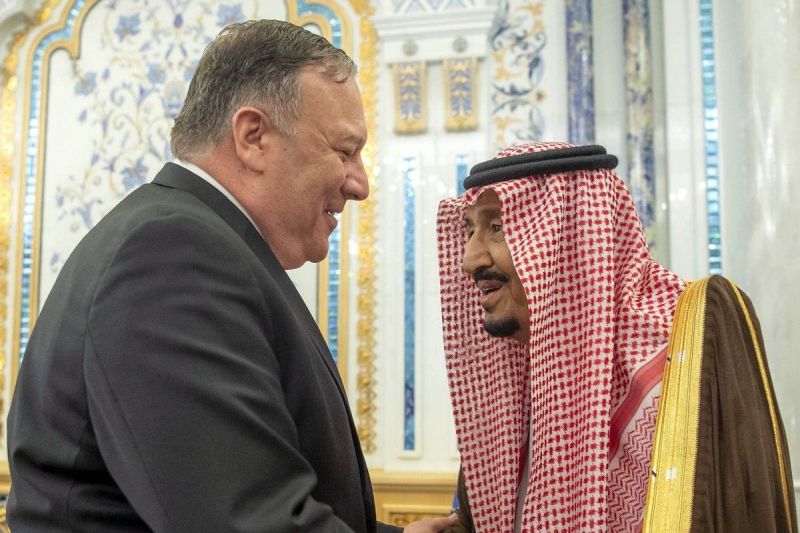 US Secretary of State Mike Pompeo tried to strike an optimistic note when he visited Gulf capitals on Monday, June 24, shortly after US President Donald Trump recalled US forces 10 minutes before conducting a strike against Iran after the downing of a US spy drone. His mission amid heightened US-Iranian tensions was to rally a coalition of 20 nations behind Washington. He was heard telling UAE leader Crown Prince Mohammed bin Zayed in Abu Dhabi that Trump’s maritime security plans for Persian Gulf shipping hinged on a coalition of allies including the Emirates, Saudi Arabia and 20 countries in all. America’s Gulf region’s allies were counted on to participate with their “military folks,” and also sharing the cost.

Pompeo arrived first in Jeddah where he met separately with Saudi King Salman bin Abdulaziz and then with Crown Prince Muhammed bin Salman (MbS). The sperate encounters further fed the rumor mill grinding out word of a rift in the royal family, with the king and his close circle striving to show they had firm hold on the kingdom’s helm, while the crown prince continued to amass powers and areas of influence.

But the Gulf rulers’ responses to Pompeo’s proposal were uniform shrugs of indifference, DEBKA Weekly’s sources report. They exhibited weariness with the countless coalition plans for combating Iran’s campaign of terror which President Trump has projected since his first visit to Riyadh in May 2017 and his epic meeting with 55 Muslim rulers. In Abu Dhabi and Jeddah, Pompeo was reminded that the original Trump plan for a new Global Center for Combating Extremism never took off. Now, he was told, it was up to Washington to produce concrete plans for safeguarding shipping security in the Strait of Hormuz in the wake of attacks on their oil tankers. The US and Saudis have laid the blame on Iran, in the face of denials from Tehran.

“Freedom of navigation is paramount,” Pompeo tweeted succinctly from the oil-rich Gulf region. But he was not armed with the concrete plans demanded, only anodyne generalities, while from Washington they heard President Trump declaring: “Major oil importers like China and Japan should be protecting their own sips in the Strait of Hormuz.” He tweeted: “China gets 92% of its oil from the strait; Japan 62% & many other countries likewise. So why are we protecting their shipping lanes for their countries (many years) for zero compensation.”

Trump went on to say: “We don’t even need to be there in that the US has just become (by far) the largest producer of energy anywhere in the world.”

Reading between the lines, the Gulf oil rulers drew two facts from the President’s comments: He won’t spend a nickel on protecting the oil routes and the US is competing with them for the world’s oil markets.

Another cause of disquiet in the Arabian Gulf Arab and Israel stemmed from America’s launch of US cyber warfare on Iran. (See separate article on this.) This appeared to them to be wide of the mark and seriously short of addressing their immediate security concerns as a response to the blowing up of their tankers, pipelines and pumping stations, especially when no one can be sure whether cyber strikes are a hit or a miss (as another item in this issue demonstrates). This type of shadow warfare gives Saudi Arabia and the UAE the sense of being shoved into a corner with no say, or the means for taking part, in a cyber war conducted between Washington and Tehran. Israel shares their unease even though it possesses advanced cyber offensive and defensive capabilities. Its spokesmen, who rarely comment publicly on their country’s military ties with the United States, this week aired concerns about the Trump administration’s stumbling response to Iranian acts of aggression, amid fears that Israel would find itself in the same boat as the two oil-rich Gulf nations.