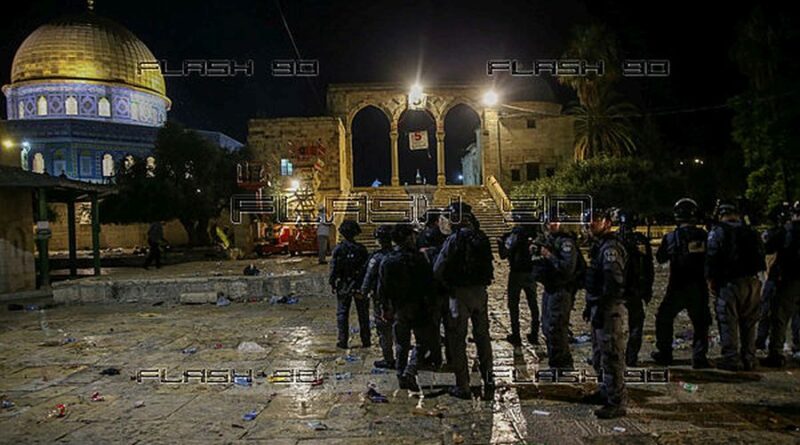 Each IDF battalion was augmented by another two and the police presence reinforced in Jerusalem, Judea and Samaria and the Gaza border, amid escalating outbreaks of Palestinian Ramadan violence on Temple Mt and other flashpoints since Friday night. That night, 17 police officers were injured by rocks and bottle bombs hurled by Al Aqsa worshippers, and more than 200 rioters hurt when the mob was dispersed with stun grenades. On Saturday night, reinforced lines of 5,000 police and border guard officers confronted 80,000 worshippers gathered on Temple Mt. for Ramadan prayers, in the hope of controlling the violence at a shrine which is sacred to three world faith. Police patrolling the Old City streets Saturday night were pelted with rocks. One officer was injured and three suspects arrested.

Military and security forces have been directed to act with restraint and not let mob violence get out of hand in the face of an inflammatory situation. To keep the number of rioters down at Temple Mt., police blocked the highways to Jerusalem on Saturday night for three hours, while halting 80 buses heading for Temple Mt and asking a number of Israeli Arab Muslims, identified as troublemakers, to leave the bus and go back home. Instead, they set out on a march to the Jerusalem shrine waving Palestinian flags. They are expected to reach their destination during the night to mark the Night of Al Qadr, when Muslims believe the Koran was passed to the Prophet Muhammed.

Hamas spokesman Abu Obeida said on Saturday night: “We salute out staunch followers in Jerusalem and Al Aqsa Mosque. Our commander Muhammed Deif made you a promise [to mete out heavy punishment to the Jews] and he will not go back on it.”

The Gaza Strip saw several outbreaks of violence along the Israeli border, including firebombs lobbed at patrolling Israeli soldiers. A second day of incendiary balloons caused a dozen blazes that were extinguished before reaching inhabited areas. The IDF Gaza force has been reinforced with an extra two battalions and is on high alert for any further escalation of Palestinian aggression.