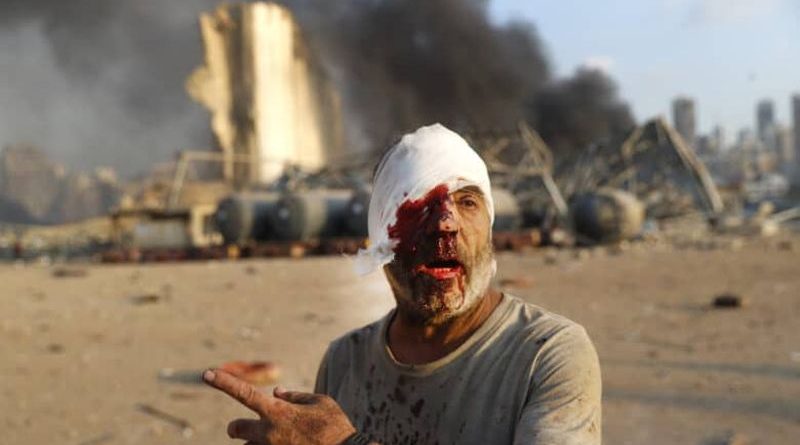 The death toll rose on Thursday to 137, with 5,000 injured and 300,000 homeless from the out-of-the-blue explosions that reduced Beirut to rubble in seconds on Tuesday, July 4. The disaster was traced to 2,750 tons of confiscated ammonium nitrate dumped at Beirut port six years ago – and forgotten. The blasts rocked the entire city with the force of a 3.4 magnitude earthquake or a 1,000-ton bomb. The suffering was immeasurable. Thousands of injured people had nowhere to go for help. Three hospitals were flattened, two damaged and their homes were blown away. An unknown number of people are still trapped, and relatives are scrabbling for survivors.

Lebanon’s main grain silo at Beirut port was destroyed in the blast, leaving the nation with less than a month’s reserves of the grain. The country depends on foreign imports for most of its food. Beirut port is the country’s main trade route for wheat, gas oil and medicines. Its infrastructure was totally destroyed. Even before the disastrous explosions, Lebanon was bankrupt, sunk in political turmoil and the specter of hunger stalked its streets.

On Wednesday, Lebanon’s military council declared Beirut a “disaster-stricken city” and called a two-week state of emergency. The council appointed a panel to investigate the causes of the disaster and another committee to provide shelter for the hundreds of thousands rendered homeless, as well as food, water and shelter. A day of mourning was declared. The governor of Beirut said that they would be able to return to their homes in “two or three months.” No one took this seriously. Those who are able will try and leave the country or find shelter with relatives outside Beirut, at a time when all movement is restricted by the coronavirus pandemic.

President Michel Aoun: “It is unacceptable that 2,750 tons of ammonium nitrate were stored in Beirut port for six years without any precautions. Those responsible will be punished with the severest penalties.” Who are they? According to a Lebanese broadcaster, six years ago, the customs department and state security confiscated and stored the dangerous chemicals at the port on a court order to export or remove them. But “nothing happened”

Prime Minister Hassan Diyab called on “all the nations who love Lebanon to stand by our side and help our recovery.”
Israel sent an offer of humanitarian aid through the UN straight after the explosion. The Lebanese government has not sent back an answer. French President Emmanuel Macron announced he was flying to Beirut with two planeloads of French rescue workers and aid on Wednesday afternoon. Lebanon is a former French protectorate and the countries retain close political and economic ties. However, Macron, though eager to take the lead in a major international program, is not likely to get far. The EU commission also has a plan to urgently dispatch over 100 firefighters with vehicles, sniffer dogs and equipment designed to find people trapped in urban areas. The Czech Republic, France, Germany, Greece, Poland and the Netherlands are taking part in the aid effort.

While untold billions are needed urgently to start rebuilding the once glamorous Lebanese capital, the squabbling, corrupt Lebanese government elite is scarcely capable of putting aid funds to their proper use. The ordinary Lebanese was not surprised to find that “nothing happened” about removing the ammonium nitrate that devasted their capital, because that is the sort of reality they have been living with.

Hizballah, which does have certain capabilities, will keep its head down, lest fingers are pointed at the huge stocks of Iranian-supplied missiles and weaponry their leader Hassan Nasrallah has arranged to be cached in different parts of the country. Certainly, this is hardly the time for Hizballah to go through with its threat to punish Israel for killing one of its fighters. An influx of foreign aid funds to the Lebanese government is more than likely to exacerbate the bitter feuding among the three sects that govern Lebanon and in particular further deepen the rift between Shiite Hizballah and the Maronite Christians.