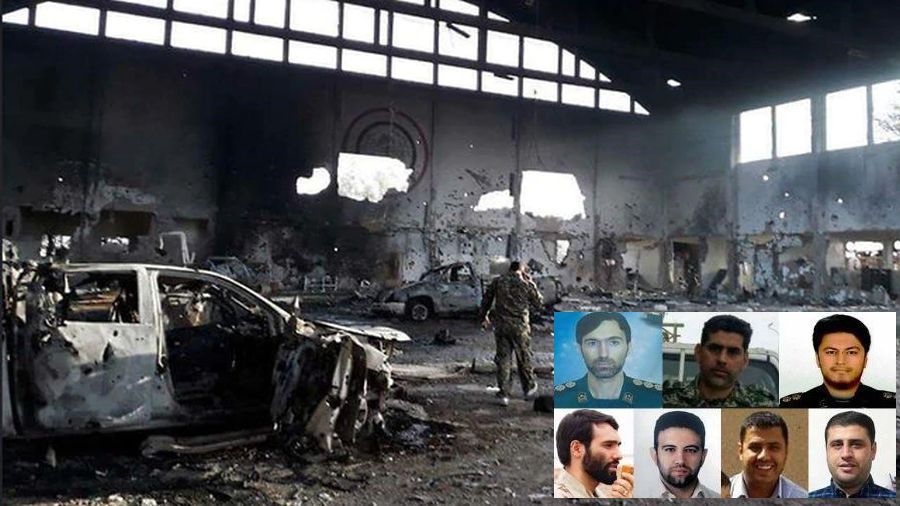 Tehran’s resolve to make Israel pay for its airborne missile attack on the T-4 air base was conveyed on April 11 by outing the 7 Rev Guardsmen killed in the attack. Iran has never, in all seven years of its intervention in the Syria war, released its military casualties. But on Wednesday, April 11, for the first time, the Iranian Guards mouthpiece, the Tasnim News Agency, ran the names and photos of the seven members of its aerospace unit, who died in the airborne missile strike on the Iranian compound of the big T-4 bases it shares with the Russian and Syrian air forces. The agency also ran pictures of heavily damaged equipment.
By coming clean about its painful setback, the Tehran regime implicitly assured the public that it was not in vain and it was committed to a reckoning with the enemy for the deaths and damage on display. The supreme leader’s senior adviser, Ali Akbar Velayati, said so bluntly when he arrived in Damascus on Tuesday: “Israel’s air strike on the Syrian air base will not go unanswered,” he said, As he spoke, Tehran gained support from its ally in Moscow with the visit of Alexander Lavrentiev, the special Russian emissary on Syria. In a long meeting with Iran’s national security adviser Rear Admiral Ali Shamkhani, the Russian said Iran’s decision for a military response to the T-4 attack was understandble. He then proposed combining Iran’s action against Israel with Russia’s plans for countering the forthcoming US-British-France operation in Syria.

The Iranian and Russian officials were of one mind that Israel’s T-4 strike was the opening shot for that operation, and the next round of attacks would target Iranian and possibly also Russian targets in Syria. On this point, they cited President Donald Trump who said on Monday, April 9, in response to the chemical attack in Douma: “We can’t allow atrocities like that… If it’s the Russians, if it’s Syria, if it’s Iran, if it’s all of them together, we’ll figure it out.”

The Russian veto Tuesday night on the US motion at the UN Security Council for an investigation into Douma attack sent this message to Washington: Moscow has completed its preparations for countering a US-led strike in Syria. It also nixed a scenario advanced by some sources in Washington: They maintained that delaying the US operation for final consultations with London and Paris, would be beneficial, since it would give the Russians time to evacuate the bases they shared with Iran and whisk their troops out of harm’s way.
Those sources misread Moscow’s intent. The Russian ambassador to Beirut put them straight on this when he said on Wednesday. “If there is a strike by the Americans then … the missiles will be downed and even their launch sites would be targeted.”
Equally out of sync was the theory put about in the last 24 hours by some sources in Jerusalem, that Israel has no part to play in the US-British-French punitive operation against the Assad regime in Syria, since its only interest lies in preventing Iran from establishing a military presence in that country.
That theory is no longer relevant, because whatever Israel does now, it is not off the hook. For Moscow, Tehran and Damascus, Israel is an integral part of the US-led alliance and is seen to have fired the first shot for the main operation against Syria. Therefore, while Israel geared up initially for a limited Iranian strike from its northern border, it is now feared that a military location deep inside the country may be targeted. During Wednesday, prime minister Binyamin Netanyahu conducted back-to-back consultations with his top security advisers: Defense Minister Avigdor Lieberman, Chief of Staff Lt. Gen. Gady Eisenklot, Air Force Commander, Maj. Gen. Amikam Nurkin, Military Intelligence Director Maj. Gen. Tamir Heiman and head of the National Security Council Meir Ben-Shabbat.