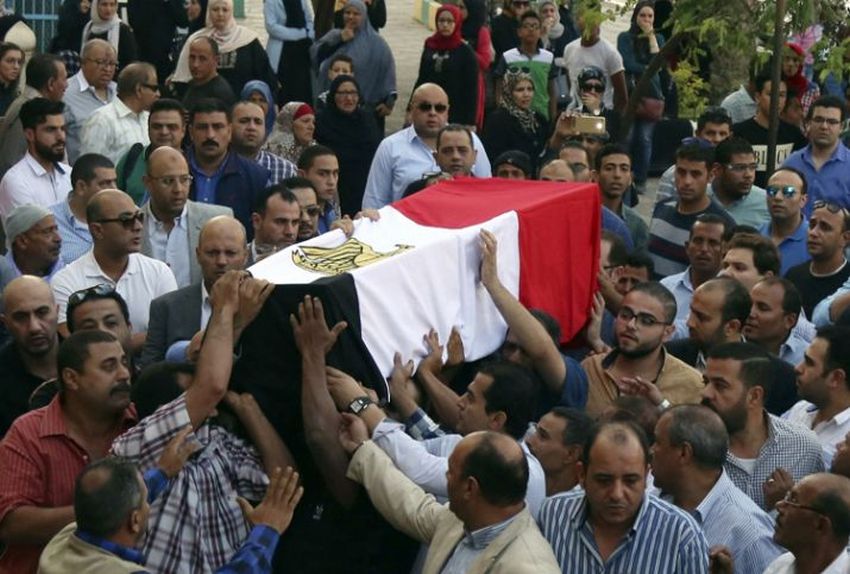 Loud cries of vengeance rose from the many funerals across Egypt Sunday, Oct. 22, as the victims of a Muslim Brotherhood massacre, which rose from 55 to 58, were laid to rest. The government declared a three-month state of emergency after discovering that an armed underground of the Muslim Brotherhood (Hasm)  had established a secret base in the El-Wahat El-Bahariya Oasis in the Western Desert. There, mega-terror attacks were being plotted. Among the targets was the highway from Cairo to the desert. Two brigadier generals were among the victims, as well as one colonel and three lieutenant colonels. They were all members of the Interior Ministry’s elite security force, which had been trained to combat terrorists.
The stunning attack on this elite force Friday revealed for the first time the scale and spread of Hasm’s deadly operations in Egypt. Until now, only a few isolated cells had been suspected. Egyptian’s intelligence and security agencies had no notion that Hasm had developed a wide-reaching terrorist infrastructure, or that it was capable of seizing a major highway before anyone realized what was happening.
The few injured police officers who survived gave chilling accounts of their experience at the hands of the Brotherhood assailants. Some of the injured men were forced to give up their firearms in surrender and were were then summarily shot dead with those same weapons.
DEBKAfile’s first report on this attack was published on Saturday, Oct. 21

An armed group of Egypt’s banned Muslim Brotherhood was reported to have waylaid an Egyptian convoy heading for its oasis hideout on Friday and murdered 55 policemen. The only survivors were 14 injured men.
But some of the evidence also points to the Islamic State as the perpetrators.

The police convoy was attacked while driving on the El-Wahat Highway from Cairo to Giza on its way to raid  a secret hideout of the banned Muslim Brotherhood’s armed underground (Hasm) at the El-Bahariya Oasis in the Western Desert, 135 southwest of the capital.
The disaster, together with a string of deadly Islamist attacks in Sinai in recent weeks, raised tough questions about Egypt’s capacity to deal with the extremist terrorism plaguing the country. President Abdul-Fatteh El-Sisi immediately set up a commission of inquiry to find out how the casualty of Egyptian servicemen came to be so high – a well-tried device used by governments for keeping the details of a mishap dark until the immediate hue and cry dies down.

DEBKAfile’s counterterrorism sources have gleaned information that points to a merciless massacre, most likely at the hands of the Brotherhood’s armed activists. According to first reports, the policemen were killed in a shootout with the extremists during a raid of their hideout in the oasis.

The wild beauty of this vast oasis – over 2,000sq.km – makes it an attraction for visitors to Cairo especially since it is just a short drive from the capital. Its sparse inhabitants are mostly Bedouin tribes with kinship ties across the border in eastern Libya, a region where the Islamic State and Al Qaeda maintain strong footholds. Because it is only visited occasionally by foreign visitors on night-time jaunts, the Brotherhood felt the oasis was far from the long arm of Egypt’s anti-terrorist forces.
After intelligence agents discovered their location, the Brotherhood cell was ready for the raid. They set up ann ambush and before the police convoy of four SUVs reached the hideout, dozens of wanted terrorists opened up with heavy machine guns, recoilless grenades and mortars, and detonated roadside bombs. The carnage was devastating.
Their tactics, involving ruthless massacre, strongly resembled the most recent Islamic State strikes against Egyptian forces in northern Sinai. On Sept. 11, 18 Egyptian troops were killed near Sheikh Zuweid.

In both these outrages, the Egyptian air force was not brought in.
If the oasis ambush was also the work of ISIS, it would indicate that these jihadists were not only terrorizing Sinai, but had also penetrated deep into the Egyptian mainland.