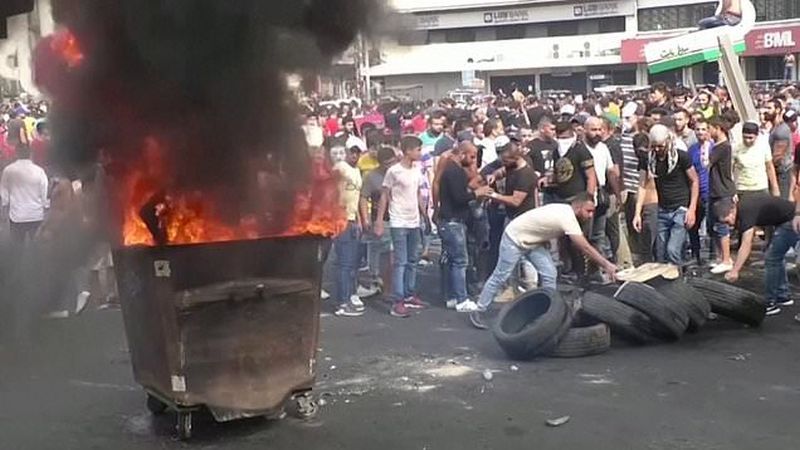 Eight years ago, Hassan Nasrallah saw that Syrian President Bashar Assad was foredoomed by a spreading civil insurgency unless he sent his Hizballah militia over to fight for him. Last month, his Hizballah troops dived into the Shiite towns of Iraq to rescue Adil Abdul-Mahdi and his government in Baghdad from violent protesters. (See DEBKA Weekly 866 of Oct. 18: Iran’s Guards, Hizballah More into Baghdad’s Green Zone while Attention Fixed on Syria).

Today, the Hizballah chief faces a grim dilemma: his militia is the only force capable of quelling the nationwide protest against taxes and corruption lashing his homeland with unprecedented force for more than a week. Neither the Lebanese police nor security forces are up to dealing with the massed riots.

Prime Minister Saad Hariri tried without success to calm the angry outbreaks by telling the nation on Oct. 18: “The pain of the Lebanese is real. They are waiting for the government to give them solutions and we couldn’t respond. I am not going to send troops into the streets to stop the demonstrations.”

He and Lebanon’s organs of law and order are helpless against the novel manifestation of an angry young generation, which sets aside for the first time the country’s traditional religious-ethnic communal rivalries. Anti-government slogans are being yelled in unison by young Shiites, Sunnis, Christians and Druzes. After more than half of Lebanon’s 6 million inhabitants were cut off from the water supply, few enjoy round-the-clock electricity and 30 percent of young people don’t have jobs, the people have turned against the country’s system of government per se. This power-sharing format was designed in the last century to end the bloody wars among Christians, Sunni and Shiite Muslims that plagued Lebanon up until the eighties. The protesters of today are united against all those communal leaders and their factions whom they accuse of corruption. Across ethnic and religious divisions, they want to see the backs of the whole pack: Christian President Michel Aoun and members of his family who hold cushy government posts, the Sunni prime minister, Shiite leaders and all their privileged relatives and cronies.

Nasrallah knows that by sending troops to quell the unrest, he risks inflaming a broad civil insurrection. This time, unlike ethnic-religious wars off the last century, the people would fight all the ruling elites, starting with shared multi-factional government institutions in Beirut. Hizballah, too, holds ministerial portfolios in government as well as a faction in parliament. He therefore has a lot to lose from the government’s downfall, a concern he shares with his allies, President Aoun and his kinsman, Foreign Minister Gebran Gerge Bassil.

The Hizballah chief enjoyed the honors of his militia’s successes in saving the rulers of Damascus and Baghdad. Now he can’t dodge the task of defending his own government without losing face in Lebanon and the Muslim world.Izballa

In a televised speech he delivered on Saturday, Oct. 19, Nasrallah said that the Shia movement does not want the government to resign, as massed anti-government protesters have demanded. He called for a new agenda and a new spirit. Calling on the government to resign was a “waste of time,” said Nasrallah, since the same political groups would haggle over forming a new one.

The Hizballah leader was clearly playing for time in the hope that the demonstrators would give up and go home.

That reluctance, say DEBKA Weekly’s sources, is understandable. Although Hizballah is the only force able to break up the demonstrations, it would be at the cost of scores if not hundreds of dead on the streets and more than a thousand injured. Repression of popular rallies by jackboot would also compromise his movement’s fundamental tenet of support for the poor and downtrodden.

But failing to shoulder the task holds the risk of Hizballah losing its power bases in Lebanon’s ruling institutions, including ministerial posts in government. The damage to his Shiite movement as the power broker in Beirut and the standing of its patron, Tehran, would be grave and prolonged. Nasrallah might also find that not all his fighters are willing to turn their guns on the people’s protests.

Nasrallah is therefore faced with two bad choices – but so is Tehran. A heavy death toll from Hizballah’s suppression of popular dissent in Lebanon, soon after its bloody crackdown in Iraq, would seriously undermine the influence Iran has built up in Beirut as well as its standing in next-door Damascus. On Tuesday, Iran’s Al Qods chief Gen. Qassem Soleimani arrived in Beirut. His trip ties in with the intelligence reaching Iran’s National Security Council, which met twice this week, that the Lebanese protesters aim to overthrow the government.