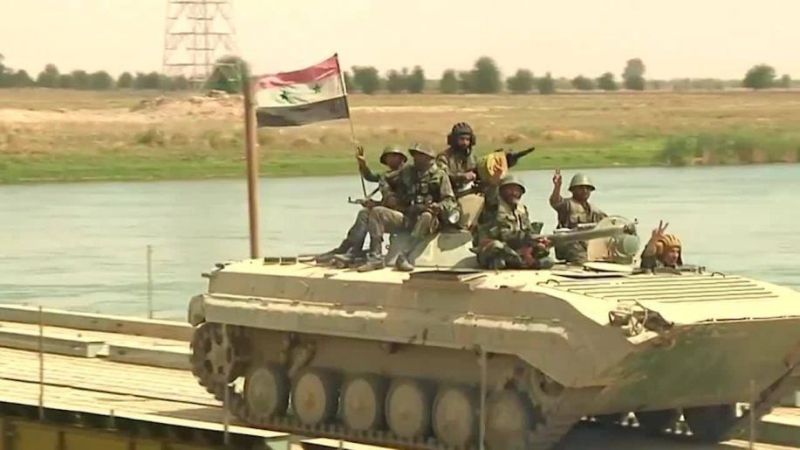 The fierce US-Russian military clashes in northeastern Syria in February and March of 2018 are but a distant memory today. Twice, on Feb. 6 and the last week of March, Russian mercenaries, attempting to build and cross a bridge across the Euphrates to carry Syrian forces to the eastern bank, were heavily bombarded by US aircraft Some put the figure of dead and wounded Russians in that attack as high as 300. US military spokesmen then announced on March 23: “Russian private military contractors remain in the area and are using local pro-regime troops to scout coalition positions fighting ISIS. If it comes down to it, we will defend ourselves.”

This week, in yet another irony of the Syrian war, not a shot was fired, nor was a US plane or helicopter seen overhead, when, at the same spot, Russian road service military experts erected a bridge across the Euphrates, a few kilometers from Deir ez-Zour in northeastern Syria, That bridge was erected to serve the deployment of Syrian military equipment and troops to the eastern bank of the river, which the US fought to prevent last year.

The MARM small motorway panel bridge, 210m long and able to serve 8,000 cars a day, was in put in place in less than two days. It is strong enough to support heavy armored vehicles like tanks, infantry fighting vehicles and multiple-launch rocket systems.

Before this bridge was built, the Syrian army was only able to post advance forces over to the opposite bank by using pontoons. Now, twenty months after US air strikes blasted Russian troops clearing the way for a Syrian army crossing, Bashar Assad’s army is again preparing a mass crossing of the Euphrates – this time unhindered.

In this regard, Russian President Vladimir Putin was quoted as citing the adage of an unknown Oriental sage by commenting: “If you sit on the riverbank long enough, you will see your enemy’s corpse float by.”

All in all, Putin was unmoved by President Donald Trump’s U-turn against pulling all US troops out of the oil and gas regions of northeastern Syria, He was just as calm on Sunday, Oct. 27 when he learned in the hours after US special forces terminated ISIS leader Abu Bakr Al Baghdadi, that US military forces had arrived from Iraq at Al-‘Umar Oil Fields of eastern Deir ez-Zour. Syrian’s largest, and continued to deploy at this site. Meanwhile, the Russian leader had been moving on the same chessboard to finish building the Euphrates bridge.

Propaganda aside, the Russian president prefers to see American forces controlling Syrian oil fields rather than the US-backed Syrian Democratic Forces (SDF) dominated by Kurdish fighters, which seized those fields from ISIS. At the same time, he allows his defense and military to let off steam against the Americans as useful propaganda. The oil field move was castigated therefore as “banditry.”

Putin does not really care if the Americans pump the roughly 25,000 barrels of oil a day produced by those oil fields or who rakes in the earnings. It is also okay if Washington uses them as a bargaining chip when Syria and its ruler’s political future come up for negotiation.

This indifference springs from the fundamental change in circumstances on the ground. Twenty months ago, the Americans held the whip hand in Deir ez-Zour and blocked Russian attempts to gain Syrian government troops’ access. Today, the shoe is on the other foot. Russian-backed Syrian government troops are already in the region and a new Russian bridge is in place.

DEBKA Weekly’s military sources report that Moscow has no plans for a long-term military presence in northeastern Syria or much interest in its oil fields. He also believes Trump’s pledge to pull US troops out of Syria at some point. Putin’s strategic objectives are adequately served by the two Mediterranean coastal bases he has acquired for his army and navy by his Syrian enterprise at the Syrian ports of Tartous and Latakia. He is also adept at using levers of control against parties infringing on Russian interests and goals. The Turkish military intervention in Syria is a case in point. Here, he applied the tactics he has long used for reining in RecepErdogan’s attempted incursions – previously in Aleppo, Idlib and Afrin and this month in the Kurdish regions. His tactic is to negotiate a deal with Erdogan for a halt in hostilities and the delineation of security zones monitored by joint Turkish-Russian military patrols. Situating those zones on Syria soil, no more than 10km deep, suffices for Erdogan to sell his operation against the Kurds to his people as “a big success.” Meanwhile, as years go by, the joint patrols fade away and Putin tells Erdogan it is time to bring his troops home.