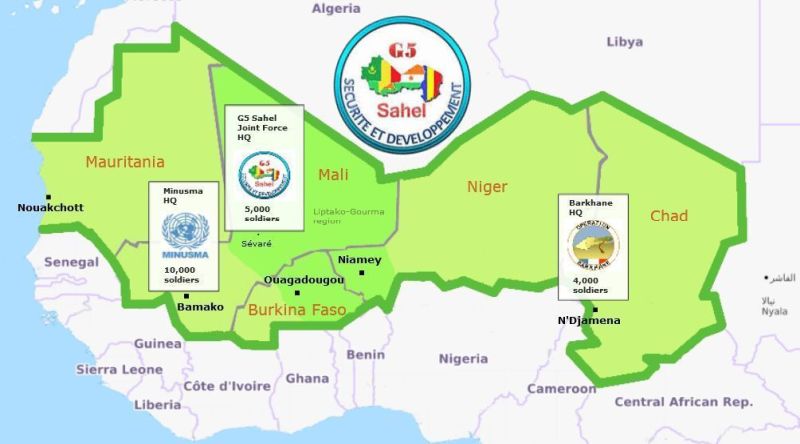 The Israel Defense Forces and their famed assets are already spread thinly across multiple known fronts – Iran, Syria, the Lebanese Hizballah, the Red Sea region, the military and intelligence and counter-terror advisers attached to the armies of Kenya and Somalia – not to mention Palestinian terror in the Gaza Strip and West Bank. Yet Prime Minister/Defense Minister Binyamin Netanyahu generously made Israel’s military resources available to yet another front – this one against Islamist terror in the Sahel region of Africa. Israel will therefore join the United States Africa Command (Africacom), France and six central African nations, Burkina Faso, Mali, Mauritania, Niger and Chad, in building the G5 Sahel Cross-Border Force, an African project for combating Islamic terrorism.

This force was launched on July 2, 2017 in Bamako, Mali, with US and French assistance, for its African members to take charge of their own security. They must fight the enemy in one of the most desolate and forbidding regions on earth. The Sahel, meaning “coast,” lies between the Sahara to the north and the Sudanian Savanna; it also girdles the African continent from the Atlantic in the west to the Red Sea in the east.

At full capacity, the G5 comprises 5,000 fighting men in seven battalions deployed in three zones, West, Center and East. A brigade will soon be deployed in northern Mali. The force secures a 50km strip on each side of the member-countries’ borders. The first G5 Sahel chairman, who comes from Niger in 2018, will maintain political control of the force, while the defense ministers of its member-states are to exercise strategic control. G5 general headquarters is located in Sévarê, Mali. Three command posts are planned. One, in the central zone, is already operational in the three-border area between Mali, Burkina Faso and Niger. The other two are under construction.

Chad is the largest contributor of personnel to the UN peacekeeping mission in Mali (MINUSMA). Chad’s president, Idriss Deby, has voiced dissatisfaction with the rate of progress made in setting up the G5 Sahel force and, most of all, with its level of performance. When he invited prime minister Netanyahu to N’Djamena last week, he was after Israel’s input to the organization. During his five-hour visit on Jan. 20, the two leaders signed a string of military and economic accords for extending military and intelligence assistance to the G5 Force and expanding trade relations.

Those accords committed the IDF and Israel’s Shin Bet and Mossad security services to inject their knowhow in the following projects:

1. The reconstruction and operation of the G5 Sahel Force.

2. The formation of an intelligence division and the training of its operatives.

4. Creation of an air force arm composed of unarmed aerial vehicles both for gathering intelligence and conducting missile attacks on terrorist concentrations.

5. Chad wants a wall like the barrier Israel built for Morocco shortly after its forces’ occupied Western Sahara in 1975. That wall helped to bring an end to the 14-year guerilla war between Morocco and the Polisario Front fighters based in Algeria. President Deby wants the Chad wall to run along the Aouzou Strip which divides his country from Libya and extend south to a depth of about 100km inside Chad.

6. The three leading terrorist organizations, which Israeli strategic and intelligence advisers will be asked to tackle under the accords with N’Djamena, are Boko Haram, Al Qaeda in the Islamic Maghreb (AQIM) and ISIS.

7. Israel will supply the G5 Sahel Force with the weapons for fighting these groups as well as communications and intelligence systems.

What Israel gained from this military assistance package was Chad’s instantaneous resumption of diplomatic ties with Jerusalem, 54 years after they were cut off, as well as profitable contracts for Israeli firms to invest in Chad and develop its water conservation system and agriculture. President Deby also promised to persuade all the G5 Force members to renew their diplomatic ties with Israel.

However, on his return home, Netanyahu, who also serves as defense minister, was coolly received by most top IDF and intelligence ranks, DEBKA Weekly reports. They said that Netanyahu had given away too much at a time when they were overburdened with spiraling confrontations with Iran as never before. They maintained that the battle arenas in Sahel bear no resemblance to the Middle East, and that the terrorist organizations there are nothing like those they know. Furthermore, Sahel terrain and the conditions there are totally unfamiliar and critically substandard.

Airbases fit for cargo planes to land in safety are sparse in the remote areas. The landing strips and small airports outside most African capitals have no fuel reserves or repair workshops. Air-to-air refueling is unheard of, except for foreign air forces. Wounded soldiers can’t expect to be transported out in time to receive medical care.

To reach enemy lairs, the troops must pass through jungles, deserts, or mangrove swamps, constantly exposed to ambush fire. Every terrorist is armed with rocket-propelled grenades and mortars. African forces have hardly any equipment for fighting UAVs. There are few trees and little foliage for masking military movements.

Helicopters are the only effective means of transport for bringing troops to their desert encampments and use as helicopter gunships, that is after the enemy is located in the wide expanse of the Sahel.

The prohibitive hardships of war in the bleak Sahel may explain why the US and France don’t object to Israel taking over. They know how tough it is and, if Israel wants to have a go, why not?