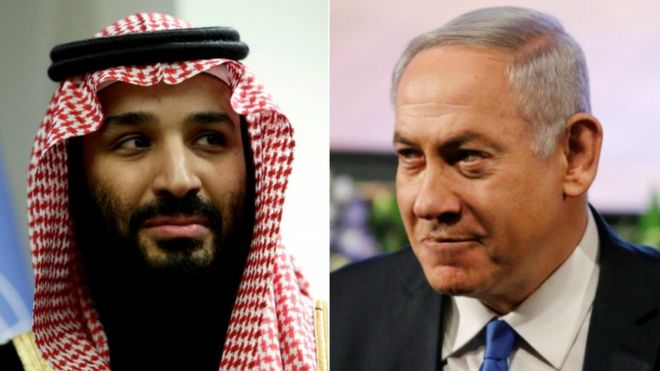 The meeting was a close secret until the prime minister Binyamin Netanyahu’s flight landed at the western Saudi town of Neom on Sunday night, Nov. 22 for a unique rendezvous with Crown Prince Mohammed bin Salman and US Secretary of State Mike Pompeo.

Neither side officially confirmed the event, believed to be the first high-level official Israeli-Saudi meeting after many years of secret relations between the two countries. The private jet that carried the prime minister to the Red Sea coastal town Sunday evening, returned him to Israel five hours later. The meeting between Pompeo and the prince was published in advance. The only surprise was Netanyahu’s arrival. He was accompanied by Mossad Director Yossi Cohen. The prime minister’s office did not confirm or deny the meeting took place. An excuse was made for postponing the coronavirus cabinet meeting from Sunday to Monday.

Hours before he took off, Netanyahu said in a speech: President-elect Biden’s administration “must not go back to the 2015 nuclear deal with Iran.” This was seen as a signal that the prime minister will go back to the highly vocal  campaign he conducted against the nuclear deal which six world powers, led by the Obama administration of which Biden was vice president, signed with Iran in 2015 and from which Donald Trump withdrew in 2018.

Secretary Pompeo has been making the rounds of US Middle East allies, most significantly Israel, the UAE and Saudi Arabia, in the past two weeks in what appears to be his last major project for the Trump administration – the establishment of a firm regional pro-US security pact for countering Iran’s nuclear weapons program, as well as its violent drive for regional hegemony.

On Friday, US special adviser on Iran, Elliott Abrams issued a blunt warning: “Iran and its proxies would be sorry for any military or terrorist activities that kill Americans.” Muscular support was provided by a heavy, long-range US Air Force B-52 bomber flying over the Mid-East in the weekend, escorted by fighter jets.

The United Arab Emirates and Bahrain, which last month established normal relations with Israel, fostered by the Trump administration, all share deep concern of Biden’s possible intentions to go easy on Iran. So, too, is Saudi Arabia, which has so far stayed out of the normalization pacts, while maintaining close security cooperation with the Jewish state.

The venue of the epic trilateral meeting carries high symbolism for the crown prince. Neom, still under construction, into which Riyadh has poured $500bn, epitomizes his vision of a smart, futuristic, eco-friendly megacity, a hub of techno innovation (flying taxis and an artificial moon) and a bridge to neighboring Egypt and Jordan.

It may be assumed that Israel’s role in this vision came up in their first conversation.