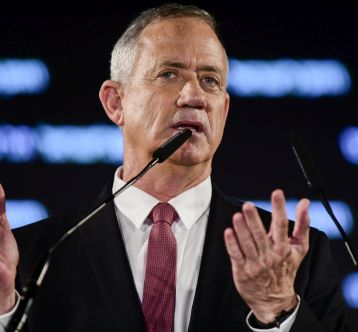 The nervous distrust marking the maneuvers leading up to the May 7 deadline for 61 MKs to present a government is unlikely to derail the Netanyahu-Gantz government coalition deal. Neither are the reservations voiced by High Court judges when their conclusions on its legal validity are announced on Thursday.

Wednesday morning, while the Knesset held end-to-end sessions to complete legislation for supporting the rotation deal in time, Gantz of Kahol Lavan demanded that the two ultra-religious parties which are integral to Netanyahu’s Likud-led bloc further cement their commitment to stay in government when he takes the premiership reins after 18 months with ironclad public avowals.

As Likud and Kahol Lavan continued to dicker over the allotment of portfolios, especially the Health ministry, both agreed to tweak their deal with changes intended to satisfy the reservations voiced by High Court judges in their hearings of petitions against its provisions.

In a joint letter to the court, the two leaders agreed to limit the freeze on senior official appointments “during the coronavirus emergency” to 100 days, This was in response to a comment by High Court President Esther Hayout who questioned the relevance of the crisis to the appointment of a police commissioner, and other top positions, held up for more than a year. She also pressed for them to define the term “emergency” and the period involved.

Netanyahu and Gantz also relinquished the clause in their accord suspending for six months all legislation but for laws related to the epidemic. They agreed instead to a formula giving precedence to coronavirus legislation without freezing other laws. Likud and Blue and White agreed to rephrase the provision requiring the latter’s ministers to resign their Knesset seats in order to open the door to fellow faction members lower down on the list. This measure is more important to Kahol Lavan than to Likud, which heads a large parliamentary bloc.

The judges found those three sections of the coalition accord incompatible with existing laws. The two partners addressed the judges’ views in a joint letter submitted to the High Court on Wednesday, in time for the judges to write their conclusions and hand them down on Thursday.

Another change, achieved during the Knesset deliberations, reduced from 75 to 70 the size of the special majority for annulling the rotation deal between the Likud and Kahol Lavan leaders.

Benny Gantz, wearing the hat of Knesset Speaker, saw opposition reservations winnowed down from 9,000 to 1,000, thereby substantially accelerating the proceedings and keeping them on track to meet the Thursday midnight deadline and blocking a fourth general election.